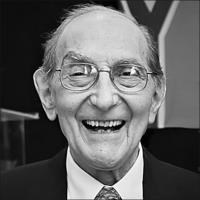 FUNERAL HOME
Levine Chapels
470 Harvard Street
Brookline, MA
FRANKEL, Freddy Harold Longtime Beth Israel Psychiatrist-in-Chief, Mental Health Thought Leader, and Poet Dr. Freddy Harold Frankel, former Psychiatrist-in-Chief at Beth Israel Hospital (now Beth Israel Deaconess Medical Center) and Professor Emeritus of Psychiatry at Harvard Medical School, passed away on Wednesday, September 8, 2021 at Lasell Village in Newton. He was 97. Fred was born in Benoni, South Africa, son of Ethel and Ludwig Frankel. At the outset of World War II, Fred was a young medical student at Witwatersrand University. He misrepresented his age to enlist; those who know him say it was likely the only lie he ever told. Fred was wounded in Italy while treating soldiers on the front lines, earning him the South African Bronze Star. Following the war, Fred returned to South Africa to complete his medical degree in psychiatry. In 1946, he met the love of his life, Betty Lilian Silberman, and they married in 1947. In 1952, Fred was offered the post of Chief Resident in the Department of Psychiatry at Massachusetts General Hospital. He returned home after residency but several years later, against the backdrop of apartheid, the couple made the difficult decision to leave South Africa. Fred reached out to colleagues in Boston, and Mass General sponsored his return as a member of the Department of Psychiatry in 1962. Dr. Frankel became a leader in Boston's mental health community. A member of the faculty at Harvard Medical School since 1969, Dr. Frankel initially practiced psychiatry at Mass General Hospital and later served as Psychiatrist-in-Chief at Beth Israel Hospital from 1986-1997. He published widely, presented papers around the world, and trained generations of psychiatrists, psychologists and social workers. "Freddy was a wonderful mentor, colleague, department chairman and academic psychiatrist. He led by example and was committed to the highest standards of quality care, respect for those we serve, and academic rigor," said Dr. William Greenberg, MD, Chief of Psychiatry at Beth Israel Deaconess Medical Center and Assistant Professor of Psychiatry at Harvard Medical School. "In a field that can at times be too vulnerable to transient notions and enthusiasms, he was guided by evidence and experience. Memories of his compassionate and careful interactions with patients serve as a beacon to those of us who witnessed them." Throughout his career, Dr. Frankel had an unwavering sense of integrity and never hesitated to take unpopular positions. At a time when electroshock therapy was highly controversial, he saw that under correct circumstances, it could have life-saving results in the treatment of depression. In 1978, he was appointed Chairperson of the Task Force on Electroconvulsive Therapy of the American Psychiatric Association. He also helped establish training programs in the use of hypnosis as a clinical tool and served as Chair of the Society of Clinical and Experimental Hypnosis from 1978-1982. Dr. Frankel was an outspoken critic of the overuse and misuse of hypnotherapy. When False Memory Syndrome rose to epidemic proportions, tearing families apart by creating false memories of sexual abuse, he helped to change the way hypnotherapy was applied and limit its use as evidence in prosecutions. When he retired from medical practice at age 73, he returned to what had been his first avocation, poetry. Fred found inspiration in poems he had scribbled in a journal during the war. Barbara Helfgott Hyett, leader of the Workshop for Publishing Poets at Harvard's Extension School and one of Fred's mentors, remarked how unusual a privilege it was to work with a wise and aged poet who used source material from his youth, untouched for more than half a century. Over the next two decades, Fred published a chapbook, three books of poetry, and dozens of poems in literary journals and anthologies. In 2003, he won the Robert Penn Warren First Prize of New England Writers. He remained a popular figure at poetry readings into his nineties. He is survived by his wife, Betty, with whom he shared a remarkable 75-year romance; children Neville Frankel (Marlene Nusbaum), Isabel Rachlin (Jeffrey Rachlin) and Dr. Allan Frankel (Terri Frankel); and twelve grandchildren, thirteen great-grandchildren, and eight beloved nieces and nephews. Fred was predeceased by three sisters, Bella Schmahmann, Fanny Emdon, and Berenice Kaplan. The family is deeply grateful to Michael (Franklin) Amoateng, Fred's devoted caregiver of five years, for his tender care, humor, and profound warmth. In lieu of flowers, contributions may be sent to The Lasell Village Benevolent Fund, 120 Seminary Avenue, Auburndale, MA 02466 or Good Shepherd Community Care Hospice, 160 Wells Avenue, Newton, MA 02459. A graveside service will be held at Newton Cemetery, 791 Walnut Street, Newton, MA on Friday, September 10 at 12:00pm. To view the service online, please use this link; https://tinyurl.com/FreddyFrankel Levine Chapels, Brookline 617-277-8300 www.levinechapel.com

Published by Boston Globe from Sep. 8 to Sep. 9, 2021.
To plant trees in memory, please visit the Sympathy Store.
MEMORIAL EVENTS
Sep
10
Graveside service
12:00p.m.
Newton Cemetery
791 Walnut Street, Newton, MA
Funeral services provided by:
Levine Chapels
MAKE A DONATION
MEMORIES & CONDOLENCES
4 Entries
My deepest condolences to the Frankel family. Regards, Marilyn Ackerman
Marilyn Ackerman
September 19, 2021
When I spoke at Dr. Frankel's retirement, now many years ago, I recall saying that it was a night that we all wished would never come. This is another time. My parents were not prone to giving me advice, but they would regularly remind me about how fortunate I was to be working for Dr. Frankel. They, as did I, appreciated his warmth, his respect for others and his obvious kindness. I came to the Beth Israel as a graduate student with similar interests to Freddy's in psychosomatic medicine and hypnosis. At that point, he was the Clinical Director in Psychiatry and as his career progressed to Editor, Department Chair, and hospital leader, he brought me along. He referred patients to me when he became too busy, he asked me to co-teach workshops on Cape Cod and across the country, he introduced me to important figures in our field and both asked me to co-author papers and told me when my name should go first. He included me in his diaspora celebrations of the New Year and honored me by including me at Passover with his family. I inherited many of his many books (that he early on insisted that I sign out from his library) and that now, my wife tells me I need to give to someone else. As people say about mentors, Freddy was bigger than life. He believed in me and he generously shared what was most important to him: family, clinical work, scholarship and his heritage. I am fortunate to have encountered this extraordinary man.
Dr. Nicholas Covino, President, William James College
Work
September 14, 2021
Freddy hired me at Beth Israel Hospital in 1987 which gave me the good fortune to know and work with him for ten years before his retirement. It was a small department but a very close-knit one. As Psychiatrist-in-Chief, he was not a micromanager but gave us scope and support to do the jobs for which he hired us. At the same time, he set a clear overall direction: the first priority was providing high quality patient care, closely followed y teaching residents and medical students and contributing to the academic enterprise. He believed in a bio-psychosocial model that integrated biological and psychosocial aspects of psychiatric illness, but for him psychiatry was firmly rooted in the discipline of medicine. He sought an evidence-based science of psychiatry at a time when many single-minded theories were supported by belief more than fact; Freddy warned against "the clinically perilous practice of seeing a single explanation for multidimensional clinical problems." He was one of the founders of the Harvard Psychiatry Training program, and he managed a smooth integration of the two psychiatry departments at the time of the merger of Beth Israel with New England Deaconess Hospital. Above al, he was a true gentleman with great warmth, calm wisdom, and dry wit.
Rohn S. Friedman, MD
Work
September 14, 2021
Sending our love and sympathy at the time of your loss Neville. Please know we are thinking of you and your mom and all of your family. Paula and Miriam
Paula S Kasler
September 12, 2021
Showing 1 - 4 of 4 results