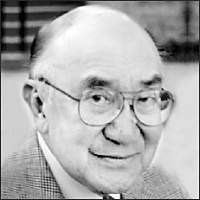 FUNERAL HOME
Concord Funeral Home
Director - Glenn D. Burlamachi, CFSP
Concord, MA
CHU, Jeffrey Chuan Beloved husband of Loretta Yung Chu, passed away at his home in Lincoln, MA on June 6, 2011, at the age of 91. Known as Chuan to family and friends, he was born into a family of scholars in Tienjin, China. He received his BS from the University of Minnesota and his MS from the Moore School at the University of Pennsylvania. Chuan was a core member of the engineering team that designed the first electronic computer, ENIAC, in 1946. As a Senior Scientist at Argonne National Laboratory, he helped design several improved versions of large-scale computers, until the 1950's when he became Chief Engineer at Univac for the LARC project, one of the earliest all-transistor computers. He continued to be a leading figure in the computer and electronics industry as microchip technology allowed computing devices to become smaller and more personal, becoming Director of Engineering and Vice President of Honeywell Information Systems, Senior Vice President at Wang Laboratories, and Chairman and CEO of Sanders Technology (Santec). He also served as Senior Advisor at Stanford Research Institute (SRI) and at Data Resources, Inc. (DRI). Most recently, he held the position of Senior Advisor and was a member of the Board at BTU International. In the 1970's, Chuan returned to China for the first time in nearly 40 years and discovered the cause that would become his passionate mission for the rest of his life. He became an active participant in the effort to modernize China. Meeting with Deng Xiao Ping and serving on various State boards, he brought his technological expertise and knowledge of Western business practices to China, and advised American companies seeking to do business in China. As a lifelong scholar himself, it was his greatest pleasure to serve as visiting professor at several universities in China. He personally established a scholarship for Chinese students to study English at Shanghai Jiao Tong University, and he facilitated the establishment of a partnership between Jiao Tong University and the Wharton School of the University of Pennsylvania. Inspired by his years of living in the U.S., Chuan promoted the idea of public service as being an essential ingredient of a successful modern society. It was his self-appointed mission to inspire individuals to help those less fortunate, and to serve a cause beyond themselves. He advocated this ideal in his many public speeches in China, and he established a Campus Civility Award for public service at Jiao Tong University. However, he taught best by his own example. A man of tremendous vigor and vision, he spent his long public life in service to both his countries. Chuan is survived by his wife Loretta of Lincoln, MA; his brother Zhu Chuan-yi of Beijing, China; his sister Zhu Chuan-yi of Tianjin, China; his daughter Lynnet and husband Noel McDermott of Santa Cruz, CA; daughter Bambi and husband Michael Rae of Naples, Italy; daughter Diedre and husband Fanul (Bodhi) Kocica of Miami Beach, FL; and stepson Van Tsai and his wife Paula of Hanover, NH. He leaves 8 grandchildren and 7 great-grandchildren. He was pre-deceased by four sisters, Zhu Tao-le, Zhu Shang-rou, Zhu Chuan-xun, and Zhu Chuan-rong, and by his granddaughter Lauren Tsai. A celebration of Chuan's life will be held on Saturday, July 16, 11:00 am, at the First Parish in Weston, 349 Boston Post Rd., Weston, MA. Interment at Woodlawn Cemetery in NY is private. Donations in memory of Jeffrey Chuan Chu may be made to the Wharton-Penn China Center Fund by contacting Jeffrey Sheehan, [email protected] To view a full obituary, leave a condolence, or share a memory please visit: www.jcchu.com or www.concordfuneral.com. Concord Funeral Home Concord, MA 978/369-3388

Published by Boston Globe from Jun. 8 to Jun. 9, 2011.
To plant trees in memory, please visit the Sympathy Store.
MEMORIAL EVENTS
To offer your sympathy during this difficult time, you can now have memorial trees planted in a National Forest in memory of your loved one.
Funeral services provided by:
Concord Funeral Home
MAKE A DONATION
MEMORIES & CONDOLENCES
2 Entries
Jeffrey -
We are of an age and were blessed by common friends.
My sincere condolances to the family and us all for our loss.
Dr. John
John Heibel
June 21, 2011
Hi , my condolences to the family of this great scientist.