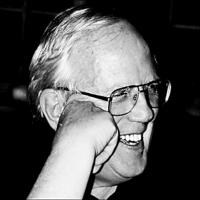 BORN
1932
DIED
2018
FUNERAL HOME
Mt. Moriah, Newcomer and Freeman Funeral Home | Mount Moriah Cemetery Sout
10507 Holmes Road
Kansas City, MO
ESTEN, Richard W. "Dick" Passed away peacefully October 17, 2018 with his wife Ellen at his side at St. Luke's Hospice House in Kansas City, MO. The previous week he spent with his three children as well, telling stories, laughing and watching the Red Sox knock off the Yankees. He successfully defied his doctors' expectations – fulfilling his promise to them that he would not succumb to infective endocarditis until he watched his beloved Patriots beat the Chiefs one last time. Dick was born in Holland, Michigan in 1932 to his parents Randall D. Esten and Mildred Cady Esten, both of Middlebury, Vermont. Being the first member of the family born outside of New England in nearly 300 years appears to have severed any concept of roots for him as he called many places home. Educated at Kimball Union Academy (where they failed to apprehend him for blowing up a fish tank in an illicit and ill-conceived science demonstration for friends), he matriculated to Middlebury College. After graduating in 1954, he married Jane Heffron with whom he had three children and he fulfilled a tour of duty in Alaska with the United States Army. Upon discharge, he enrolled in Cornell University and earned an MBA. Dick began his career with the Foxboro Company in Foxborough, MA. In 1969, he ignored his father's assertions that joining a small computer firm was folly and he became an executive at Digital Equipment Corporation. Lesson learned, he never offered unsolicited career advice to his children. Over his years with DEC, he would work in Westminster, MA, Puerto Rico, New Mexico and at the Mill in Maynard, MA. His first marriage ended in 1983, and in 1985 he married Ellen Karp. In 1997, he finished his career in Geneva, Switzerland as Vice President of Manufacturing for Digital Europe. He spent his last 22 years in Kansas City where he enjoyed the BBQ and loved touting the successes of his Patriots to the local Chiefs fans. During those years he volunteered his time and expertise to CASA of Johnson & Wyandotte Counties, mentored students, traveled with the love of his life Ellen and enjoyed visiting his children and grandchildren. He was preceded in death by his parents and his brother Doug. He is survived by wife Ellen, his three children from his previous marriage, Doug (Weegie), Christine (Boots), Michael and his nephew, Scott Ross as well as his much-loved grandchildren Anna, Will, Elizabeth, Ted and Eric. In addition, he will be missed by his adored Willow, the latest in a succession of beloved canine companions that included Misha, Rufus, Sandy, Bear, Samantha and Andy. In lieu of flowers, gifts to honor his memory may be made to CASA of Johnson & Wyandotte Counties, 5700 Broadmoor St. #201, Mission, KS 66202; Congregation Kol Ami, 4501 Walnut St., Kansas City. MO 64111; or Special Olympics at give.specialolympics.org. A memorial service will be held Sunday, October 28, 2018 at 2:00 pm at Mount Moriah, Newcomer & Freeman Funeral Home, 10507 Holmes Rd., Kansas City, MO 64131. www.kccremation.com

Published by Boston Globe from Oct. 19 to Oct. 21, 2018.
To plant trees in memory, please visit the Sympathy Store.
MEMORIAL EVENTS
Oct
28
Memorial service
2:00p.m.
Mt. Moriah, Newcomer and Freeman Funeral Home | Mount Moriah Cemetery Sout
10507 Holmes Road, Kansas City, MO
Funeral services provided by:
Mt. Moriah, Newcomer and Freeman Funeral Home | Mount Moriah Cemetery Sout
MAKE A DONATION
MEMORIES & CONDOLENCES
3 Entries
Offering our sincere condolences. May the God of love comfort your heart and make you firm in your time of grief. 2 Thessalonians 2:16,17.
November 6, 2018
I remember so many things its hard to know where to start. So I'll just say it was a delight and pleasure to work with you and to know you as a friend.
Fondest love
Annie
Ann Dearnaley
October 24, 2018
Condolences to Dicks family. What I remember most about Dick is going to the pinball parlors in Geneva, Swithzerland with him. He was a real competitor.
John Perry
October 19, 2018
Showing 1 - 3 of 3 results