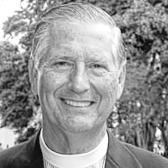 Rev. Dr. Peter C. Moore MT. PLEASANT - The Rev. Dr. Peter C. Moore, 83, peacefully entered into eternal life May 30 in Mt. Pleasant, SC. Born in Scarsdale, NY, Peter was an innovative leader, mentor, preacher and author for more than 50 years. He currently served as the director of the Anglican Leadership Institute since 2016, training leaders in the world-wide Anglican Church in servant leadership, all the while serving as a scholar in residence at St. Michael's Church, in Charleston, SC. Peter served as director of the Council for Religion in Independent Schools in New York City and, at that time, started FOCUS (Fellowship of Christians in Universities and Schools) in 1962. FOCUS seeks to bring Christ to students attending independent Secondary Schools along America's East Coast. He then served as the fourth dean/president of Trinity School for Ministry and as its first president of the board of trustees, before moving to Charleston, SC. Decade after decade, Peter was an unswerving, tireless agent of the Gospel of Jesus Christ. He was a man who served under the Bible and not above it, fighting to keep the church he knew and loved in a place of obedience to Scripture. Peter also had an unrelenting passion to reach the next generation for Jesus Christ, as evidenced by the men and women who came to know Christ through Peter's work from pulpit to public debate, classroom to tennis court, ski retreats to one-on-one lunches, truly anywhere he went. He leaves a global legacy that is sorely missed. It was not by coincidence that Peter died on the eve of Pentecost: Peter lived and breathed through the power of the Holy Spirit. Peter held degrees from Yale University, Oxford University, Episcopal Theological Seminary and Fuller Theological Seminary, where he earned his doctorate. He served in parish ministry at All Souls Episcopal Church, East McKeesport, PA. Peter later served as rector of Little Trinity Anglican Church, a historic parish in downtown Toronto. Peter was also a gifted academic and the author of several books, including: A Church to Believe In; Disarming the Secular Gods; One Lord One Faith: Getting Back to the Basics of your Faith in an Age of Confusion; Can a Bishop be Wrong? Ten Scholars Challenge John Shelby Spong; and From Dry Bones: Reflections on an Unpredictable Life. Peter wrote for the Carolina Compass a prolific and impactful column called "Moore to Ponder." He is survived by his wife, Sandra; three children: Jennifer Moore; the Rev. Kate Norris (the Rev. Sean Norris); and David Moore (Alexandra Moore MSN CRNP) and two grandchildren, Rhyan Norris and Skylar Norris. Instead of flowers, the family requests that a donation be given to FOCUS; P.O. Box 1027; 140 Elm Street; New Canaan, CT 06840 or to Trinity School for Ministry, 311 Eleventh St.; Ambridge, PA 15003. The memorial service arrangements will be announced at a later date. Visit our guestbook at www.legacy.com/obituaries/ charleston
Published by Charleston Post & Courier from Jun. 2 to Jun. 3, 2020.
To plant trees in memory, please visit the Sympathy Store.
MEMORIAL EVENTS
To offer your sympathy during this difficult time, you can now have memorial trees planted in a National Forest in memory of your loved one.
MAKE A DONATION
MEMORIES & CONDOLENCES
16 Entries
Your smile,laughter and humbleness is still fresh in my mind. Your humor and caring spirit makes us feel your presence. You will be forever be in my memory. I thank God for giving me the golden opportunity to meet you. I thank God for upholding His family. Continue to rest in eternal peace,until we meet again.
Rev Sophy Kaguai- Kenya.
Rev.Sophy Kaguai
Friend
May 28, 2021
A life well lived. We will forever miss you though your legacy lives in our hearts. You fought a good fight, you finished the race and you kept the faith.
Fare Thee Well!
Josphine Ngahu
Student
June 20, 2020
This news brings me to tears. Peter was my spiritual Father when I was a teenager in the '70s. I was encouraged to attend the FOCUS retreat center on Marthas Vineyard where I opened my heart to Jesus and devoted my future to walking as a believer. Just some 4 years later when I gratulated college Peter officiated our wedding. This brilliant man and warm hearted leader will be deeply missed except for the indelible mark his influence has made on hundreds of people, and the good graces of our Lord, Peter left on little 'ol me.
Heather King Taylor
Friend
June 19, 2020
My relationship with, admiration, and affection for Peter are truly life-long for me. My mother (Samantha Schreiber) worked with Peter at CRIS and in the early days of FOCUS, my father (Steve Lanfer) was an early FOCUS volunteer. Peter introduced them to one another, and they subsequently named me after him. Some of my earliest childhood memories involve vacations with the Moores in various hazily remembered idyllic locations. Over the years, I had the pleasure and privilege of spending time with Peter, and I have been deeply impacted by him, and by the ministry of FOCUS as a high school student, a college volunteer, and a regional staff in GWA. Through FOCUS, I was able to reconnect with the Moores as friends, students, and mentors and to meet my wife Sarah and her FOCUS family (Charlie, Jeannie, and Allen Drew). Our families have been richly blessed and changed by the faithful work and steady friendship of Peter, and by the ministry of FOCUS. Deepest condolences from the Lanfers, Langetiegs, and Drews.
Peter Lanfer
Friend
June 15, 2020
As a Late vocation, I was in a last class at Berkeley Divinity school now under Yale. In many of my disagreements with liberal teaching, I relied greatly on MANY of Peters writing. I have many signed resources of Peter that helped me save the day.
The Ven. Dr. Ronald S Gauss
Friend
June 15, 2020
Peter was a more than very special friend to me and my wonderful wife of almost 51 years, Carley. In fact, Peter officiated at our wedding in Bryn Mawr, Pennsylvania. He also preached at my mother's funeral in Greenwich, CT.

I first met Peter when he knocked on my door (along with Sam Abbott) in Quincy House at Harvard in 1963 to tell me about FOCUS. He was an important, God-given part of, and, most importantly, a true blessing to my life, as well as Carley's. I treasured his friendship and mentorship (pastoral and otherwise) all along our life's journey. I thank God for bringing him (and Sandy) into our lives.

Peter and I talked about the God-ordained mysteries of our lives. As it says in Isaiah, "My thoughts are not your thoughts and neither are your ways my ways." While I certainly do not always understand why what happens to us does happen, the wonderful reassurance we have is that we are ever in His gentle, caring Hands. "Weeping endures for a night, but joy comes in the morning. " What a wonderful promise we have as to what awaits us in His presence! Peter, I look forward to seeing you there!!
Barry Smith
Friend
June 15, 2020
All I can say is that he changed my life early on for the better. He helped my whole family out of times of trial. He is going to be sorely missed. I'm so sorry for the whole families loss.
Sheila R. Pollex
Student
June 11, 2020
Rev Peter was a kind servant God, i happened to interact with him during the ALI 2020.Through this organization, i bordered my first flight from Africa to USA. I will forever cherish that moment, courtesy of our brother, Rev. Peter Moore. I will forever miss him. My condolences to the Wife Sandra and the entire family.
Rev Sophy Kaguai
Friend
June 8, 2020
Please except my deepest sympathies to you and your family. As the days and weeks pass, and as you return to life's routine, may you continue to feel comforted by the love and support of family and friends.
Simone Taylor
June 7, 2020
Peter was a mentor to me through my first few years after college which was a key part of my journey. I spent a summer with him serving as a FOCUS counselor at Marthas Vineyard, and was happy to see him on his return visits to Pittsburgh. He will be greatly missed and I am thankful for the memories I had with him playing tennis, conversing, and knowing him. All the best to the family.
Neil Rabi
Friend
June 7, 2020
Never met Mr Moore but always looked forward to his column in the Mercury magazine. In some way some how he got my attention and I will miss him
Bill Brooks
June 7, 2020
My life would not be what it is today without the energy of Peter Moore (and the prayers of Sandra) who started FOCUS where I came to Christ, prayed for me as a FOCUS staff worker, officiated at my wedding, and is now in heaven with my husband, David. Thank you Peter and Sandra. Both of you persevered by faith looking unto Jesus the author and finisher of our faith! Nan Powlison
Nan Powlison
June 4, 2020
Peter was truly an inspiration to us all. Through his vast knowledge and passion for Christ, he had such a gift for drawing others to Christ whether teaching a Life Group, presenting a lecture or just through a one on one personal discussion. We were honored to have him speak to our womens group last fall which drew so many women from Anglican churches all over the Charleston area. Peter will be sorely missed, but rest assured he has left a strong legacy for other Christian leaders to follow and that he had entered the Lords kingdom. We are praying for his sweet family over this loss.
Joanna Ghegan
Friend
June 4, 2020
Peter was a blessing. He was a very close friends. I invited him on the Board of Directors for Episcopal Radio-TV Foundation, Inc when I was President. He was the godfather of my oldest son Peirce. My wife and I brought him the deed from our mutual friend Whitney Atwood to the property in Martha's Vineyard that became the home of Focus. He served on the Board of Reference for Good News Communications, Inc since the 1980s. And, much more. That said Peter was a brilliant teacher and wise collaborator. He had all the fruit and gifts of the Holy Spirit. He was a mighty man of God whose faith ignited faith in all who knew him. He is rejoicing at the Banquet in Heaven with Jesus Christ. My prayers for Sandra, who is a wonderful blessing to us and everyone too.
Theodore Baehr
Friend
June 3, 2020
A life well Lived! May he Rest In Peace with his Lord.
Jan Freeman
Acquaintance
June 3, 2020
The world will miss this wonderful man who has gone to be with the Lord. We send our condolences to Sandra and the family. Lots of love, Sue and Randy Eddy
Sue eddy
June 3, 2020
Showing 1 - 16 of 16 results