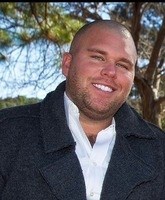 BORN
1985
DIED
2021
FUNERAL HOME
Raymer-Kepner Funeral Home
16901 Old Statesville Road
Huntersville, NC
Robin Brayden Pemberton
October 3, 1985 - September 8, 2021
Charlotte, North Carolina - Robin Brayden, "Bray", Pemberton, 35, of Charlotte, North Carolina, passed away on September 8, 2021. Bray was born on October 3, 1985 in Mecklenburg County to Robin and Lisa Pemberton. He is survived by his loving wife, Brooke Pemberton; son, Jayden Gray; daughter, Brixlynn Pemberton; mother, Lisa Pemberton; father, Robin Pemberton; brother, Briggs Pemberton; and numerous extended family and friends.
Bray's passions growing up were basketball and racing. He formed many deep childhood friendships and had a great love for animals, especially dogs.
Bray was an excellent student and became an outstanding basketball player. In high school he excelled in the game setting records that still stand today. Bray received a college basketball scholarship and continued to make his family proud as he earned a college degree in Sports Entertainment while serving as an officer of the SAE fraternity. He continued to pursue his love of sports by earning a degree in Law, allowing him to achieve his dream of becoming a sports consultant.
At a young age Bray watched his father's developing career in NASCAR and was inspired to follow in his footsteps. He had a great business sense and excelled at putting together beneficial partnerships and sponsor relationships. He worked with many people with whom he formed great friendships.
Bray's life was filled with love, his love of family, especially Brooke, Jayden, and Brixlynn. He had a strong desire to be the best that he could be in everything he attempted. In his too short of a life, Bray was a very successful man.
We will all miss Bray, but we will remember his good life and all of his accomplishments, along with the good times we shared with him. He is in God's loving hands now. Maybe God has a basketball team that needs a great player!
A celebration of life will be held at 5:00 PM on Tuesday, September 14, 2021, at Langtree Plantation, 554 Langtree Rd., Mooresville, NC 28117. Service to begin at 6 o'clock. Memorial donations in the memory of Bray may be made to the Ada Jenkins center, which facilitates solutions for economic stability in Davidson, North Carolina. Ada Jenkins is located at 212 Gamble St., Davidson, NC, 28036.

Published by Charlotte Observer on Sep. 13, 2021.
To plant trees in memory, please visit the Sympathy Store.
MEMORIAL EVENTS
Sep
14
Celebration of Life
5:00p.m.
Langtree Plantation
554 Langtree Rd., Mooresville, NC
Funeral services provided by:
Raymer-Kepner Funeral Home
MAKE A DONATION
MEMORIES & CONDOLENCES
Sponsored by The Charlotte Observer.
2 Entries
Sorry for your loss Robin, I know it's been along time, but my wife Barb and I send our condolences from Montana. 406 827-4679
David M Petteys
September 18, 2021
My thoughts and prayers on the passing of Bray. He will be missed as he was a great person and friend to all of us.
Jim Hannigan
September 14, 2021
Showing 1 - 2 of 2 results