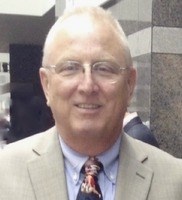 BORN
1952
DIED
2021
FUNERAL HOME
Withers and Whisenant Funeral Home
2916 Union Road
Gastonia, NC
Tim Sappenfield
March 28, 1952 - September 22, 2021
Belmont, North Carolina - Belmont – Timothy "Tim" Craig Sappenfield, 69, passed away peacefully on September 22, 2021, at his residence surrounded by his loving family.
He was a native of Mecklenburg County, born on March 28, 1952, to the late Robert Warren Sappenfield and Audrey Gaddy Sappenfield. Tim worked in sales for over 40 years. He was a high school wrestling official for 45 years and formed many lasting friendships and relationships with fellow officials, coaches, and athletes. He was inducted into the National Wrestling Hall of Fame in 2014 where he joined his father as the first father and son duo. Tim retired as the Regional Supervisor for the West Central Wrestling Officials Association. During his career, he received numerous awards and was recognized as one of the top wrestling officials in North Carolina. Tim attended Appalachian State University on a wrestling scholarship. He was an avid Carolina Panthers fan. Tim and Debbie worked side by side on many rebuilding and decorating adventures. They also enjoyed spending time at Sunset Beach. Tim was the most loving husband, father, grandfather, and great-grandfather who will be greatly missed. Left to cherish his memories of 30+ years is his wife Debbie Sappenfield; their wonderful children, Shannon (Chris) Shepherd, August (Jody) Mayberry, Charlie Carnes, Chris (Anna) Carnes, Amy (Jason) Ingold and Ashley (Adam) Maier; his grandchildren, Storm (Ryan) Earnhardt, Jewell and Hawke Shepherd, Dorothy, Sophie and Harris Carnes, Jacob and Ashton Smith, and Lauren Arthurs; and a great-grandchild, Sutton Earnhardt; and his extended family Heather and E.J. Smith, Sheila and Dennis Lein.
A Celebration of Life service will be at a later date. In lieu of flowers, memorials may be made to Gaston Hospice, P.O. Box 3984, Gastonia, NC 28054. Condolences may be made to www.withersandwhisenantfuneral.com
Withers and Whisenant Funeral Home is serving the Family.

Published by Charlotte Observer on Sep. 26, 2021.
To plant trees in memory, please visit the Sympathy Store.
MEMORIAL EVENTS
To offer your sympathy during this difficult time, you can now have memorial trees planted in a National Forest in memory of your loved one.
Funeral services provided by:
Withers and Whisenant Funeral Home
MAKE A DONATION
MEMORIES & CONDOLENCES
Sponsored by The Charlotte Observer.
4 Entries
RIP, My Friend! You were one of the truly great guys!
Ron Tucker
September 26, 2021
It's hard to believe that you are gone. But as hard as this is to accept, I am so thankful that God gave me the chance to know someone as kind and loving as you always were. My family and I are forever thankful to have been blessed by your kindness. In loving memory of a wonderful person. We will love you and miss you always. Rest well, until we meet again.
Teresa
September 26, 2021
You are one of the most amazing people I've ever met in my life. Your integrity is unparalleled, your love, duty, honor, concern, and compassion is unmatched. There simply are not enough words to express what an amazingly good man I believe you are, nor are there any to express the fact that you are now gone must be wrestled with. Tim, you have meant a great deal to Lamar and I, and you've forever shaped our world view. If there is one thing that brings me smiles in the midst of my tears, it's that you are with the Lord and I know for certain that Mr.Bob took you right up to the all you can eat ice cream buffet in heaven. It has been an honor and a pleasure, Tim. Rest well. You have done what few have and can say what fewer still can say-- You finished your race. You fought the good fight. And I am certain that you are another of God's sons, in whom He is well pleased. We love you forever.
Alandria Sims
Friend
September 26, 2021
Papa Tim, I will miss you so much.
Lauren Arthurs
Grandchild
September 24, 2021
Showing 1 - 4 of 4 results