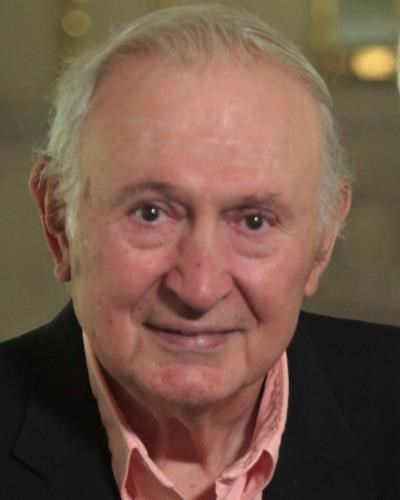 Raised on a dairy farm in Hebron, Illinois, Bill attended Alden-Hebron High School, where as a lanky 6'5" freshman, he was recruited by coach Russ Ahearn to play on the Green Giants basketball team. Before this time, Bill had never played basketball and had to ask his father's permission to be released from his after-school farm chores. He worked hard to develop his skills, and by his junior year, he had grown to 6'10" and played center on Hebron's varsity team of only 5 players. That year, the team had a record of 35-1 and won the 1952 IHSA Basketball Tournament by beating Quincy in overtime 64-59, with Bill as the leading scorer. Alden-Hebron with just 98 students at the time is the smallest school ever to win the IHSA Boys Basketball State Tournament in the old one-class system. In 2017, Bill was inducted into the Illinois Coaches Association Player Hall of Fame. Today, the Hebron water tower is painted to look like a basketball honoring the 1952 team's accomplishments.

Bill received a scholarship to play basketball at Northwestern University. He was co-captain of the team his senior year and a member of the Alpha Delta Phi fraternity. He met his wife Karin at Northwestern, and they married August 31, 1957. After living in Evanston for two years, they moved to Northbrook, IL and lived there for 56 years. Bill never waned in his support of Northwestern teams. He was a loyal fan and season ticket holder for NU football and basketball games. He and Karin traveled to cheer the NU football team in several bowl games.

Bill joined Motorola in 1957 and stayed with the its Quasar division after it was sold to Panasonic. In 1987, he became a proud owner-operator of a True Value Hardware store. Bill loved being a father and supported his children's activities by coaching Northbrook Park District soccer and basketball, joining the Glenbrook North parent associations for the orchestra and band and serving as president of the GBN Booster Club. Bill was an early member of Gloria Dei Lutheran Church in Northbrook, where he served on the church council and enjoyed meeting with his lunch group, the ROMEO's. Bill also loved the outdoors and led his family on wonderful camping trips. In retirement, he and Karin enjoyed camping with the Cardinal Capers camping group.

Well liked by all who knew him, Bill was a loyal friend and loved chatting with everyone he met. A memorial service will be planned for this summer at Gloria Dei Lutheran Church in Northbrook, Illinois. In lieu of flowers, the family request that donations be made to the Northwestern Wildcat Excellence Fund (supportthecats.com) or Gloria Dei Lutheran Church, 1133 Pfingsten Road, Northbrook, IL 60062.

Published by Chicago Tribune on Jan. 31, 2021.
To plant trees in memory, please visit the Sympathy Store.
MEMORIAL EVENTS
To offer your sympathy during this difficult time, you can now have memorial trees planted in a National Forest in memory of your loved one.
Funeral services provided by:
N.H. Scott & Hanekamp Funeral Home
MAKE A DONATION
MEMORIES & CONDOLENCES
3 Entries
I didn't know Mr. Schulz, but as a boy in central Illinois, I thrilled to the exploits of tiny Hebron winning the Illinois High School basketball title, playing alongside the Judson twins Paul and Phil. As a fellow Alpha Delta Phi (Illinois 1965), I'll pray for his soul.
David Salyers
January 31, 2021
I have very fond memories of Bill, both from Gloria Dei and the close friendship between my daughter Gail and his daughter Julie. Bill was a towering man in all favorable respects. He had an impressive life and will be greatly missed. Joan Zienty
Joan Zienty
January 29, 2021
My sincere condolences to my dear friend Russell in Berlin
Rose
January 27, 2021
Showing 1 - 3 of 3 results