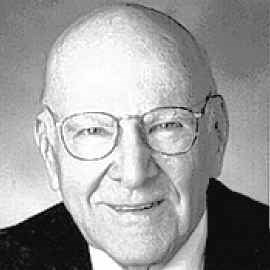 
Oscar Gustave Mayer, age 95, passed away on Monday, July 6, 2009 at HospiceCare Inc. He was born in Chicago, IL, March 16, 1914, the son of Oscar Gottfried and Elsa (Stieglitz) Mayer. Oscar entered Nicholas Senn High School on September, 1926 and graduated in 1930. He played the clarinet in the Senn band, which won national high school band championships, 1929 and 1930. In September of 1930 Oscar entered Cornell University and graduated in 1934 with a BA Degree and in September of 1934 he entered Harvard Business School. He withdrew from Harvard for health reason in January of 1936. He began full-time work at Oscar Mayer & Co., Chicago, IL in April 27, 1936. On November 21, 1942 Oscar was united in marriage to Rosalie Ann Harrison. Together they moved to Madison on in November of 1946 where they raised three sons and were active in the community for over 50 years. On June 20, 1998, Rosalie passed away. Oscar married Geraldine Fitzpatrick on January 9, 1999. In 1946, Oscar was transferred to the Madison, WI plant of Oscar Mayer & Co. He was elected President of Oscar Mayer & Co. in 1955 and in 1966, elected Chairman of Board of Oscar Mayer & Co. Oscar retired from Oscar Mayer & Co. in 1977. In 1950, Oscar was appointed Chairman of First Madison United Givers Fund campaign. From 1957-1972 he served as Trustee of the Committee for Economic Development and in 1972, he was elected Honorary Trustee. He served as Director of Madison General Hospital (now Meriter) in 1959 to 1962. He was elected to the Board of Directors, American Meat Institute in 1961. He served as Trustee of Northwestern Mutual Life Insurance Co. from 1963 to 1983 and was elected Trustee Emeritus upon retirement as Trustee in 1983. Mr. Mayer served as Director of Wisconsin Telephone Co., 1969-1983 and served as Director of University of Wisconsin Foundation, 1969-1981. From 1970 to 1981, he served as Midwest Chairman of U.S. Savings Bond Drive. He served as Director, Federal Reserve Bank of Chicago from 1973 to 1978. In 1976, he was elected Director of the Lyric Opera of Chicago. In 1977 he was elected Lifetime Honorary Member, Madison YMCA. Oscar Mayer received honorary LLD degrees from the University of Wisconsin in 1977, from Beloit College in 1981, and from Edgewood College in 1991. He received the Distinguished Service Award from the Wisconsin Alumni Association in 1980. He was named Wisconsin Business Hall of Fame Laureate in 1990 and in 1996 was elected to Wisconsin Meat Institute Hall of Fame. On May 7, 2000 he received Lifetime Achievement Award from Madison Community Foundation. Over the years, Oscar was active in many memberships in the following clubs: Maple Bluff Country Club, Madison Club, Chicago Club, Thunderbird Country Club, and Blackhawk Country Club. Oscar is survived by Geraldine, his loving wife of 11 years; his three sons, Oscar Harrison, Donald Lawrence, and William Edward; eight grandchildren, Oscar Henry, Stephanie Mayer Heydt, Patricia Mayer Lewis, Michelle Louise Gates, Chadwick Patterson Gates, Charlotte Marie Mathena, Donald Lee, and Wendy Ann; 13 great-grandchildren, Oscar Raymond, Elizabeth Danuta, Charles Harrison Heydt, Eleanor Gray Heydt, Carl Dolan Lewis, Hayden Lee Lewis, Grace Harrison Lewis, Samuel Montgomery Gates, Jacob Patterson Gates Joshua Alfred Gates, Emory Lane Mathena, Ethan Garrett Mathena and Emerson Lawrence Mathena; and his brother, Allan Carter. He was preceded in death by his parents; his wife, Rosalie; brother, Harold Max; and sister Elinor Marie. Public visitations will be held at CRESS FUNERAL HOME, 3610 Speedway Rd., on Thursday, July 9, 2009 from 4 to 7:00 p.m. and again on Friday, July 10, 2009 at the funeral home from 4 to 7:00 p.m. Funeral Services will follow for extended family members. A public memorial event is being planned for a later date. In lieu of flowers, memorials may be made in memory of Oscar to: Madison Community Foundation, P.O. Box 5010, Madison, WI 53705-0010 and United Way of Dane County, 2059 Atwood Avenue, Madison, WI 53704. 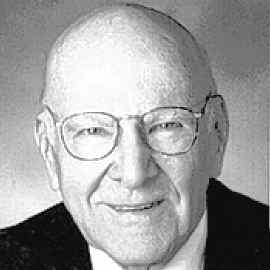 Published by Chicago Tribune from Jul. 8 to Jul. 15, 2009.
To plant trees in memory, please visit our Sympathy Store.
MEMORIAL EVENTS
To offer your sympathy during this difficult time, you can now have memorial trees planted in a National Forest in memory of your loved one.
Funeral services provided by:
Cress Funeral & Cremation Service - Madison West
MAKE A DONATION
MEMORIES & CONDOLENCES
17 Entries
For Oscar...R.I.P.

WEEP NOT FOR ME

Do not weep for me, for I am a ray of sunshine that touches your skin, a tropical breeze upon your face, the hush of joy within your heart and the innocence of babes in mothers arms.

I am the hope in a darkened night. And, in your hour of need, I will be there to comfort you. I will share your tears, your joys, your fears, your disappointments and your triumphs.

Do not weep for me, for I am cradled
in the arms of God. I walk with the angels, and hear the music beyond the stars.

Do not weep for me, for I am within you;
I am peace, love, I am a soft wind that caresses the flowers. I am the calm that follows a raging storm. I am an autumns leaf that floats among the garden of God, and I am pure white snow that softly falls upon your hand.

Do not weep for me, for I shall never die, as long as you remember me...
with a smile and a sigh.


© Joe Fazio
[email protected] Joe Fazio
November 20, 2009
We are saddened to hear of Mr. Mayer's passing. Our sincerest sympathies to the Mayer family.

The Staff, Officers, & Directors
The National Fraternity of Alpha Chi Rho and Educational Foundation
Alpha Chi Rho National Fraternity
August 10, 2009
Offering our deepest condolences during this difficult time.
The Staff of Cress Funeral & Cremation Service
July 15, 2009
Working my way through medical school as a bellboy at the Drake Hotel, Mr.
Mayer always gave me a 5$ tip, that was ample money in 1977. He was a true gentleman, always kind and talkative, he told me the whole story of the business even though I was a lowly hotel employee. I really respected him, and have thought of him often the last few years. Such a legacy we should all leave.
Ted Ary
July 14, 2009
Loved your hot dogs.
Lonedog.
July 14, 2009
We are sadden by the news of Oscar's death. Mary and I were privileged to know Oscar and Rosalie during our happy days in Madison. Small world that it is we now attend church with grandchild Patricia Mayer Lewis and great-grandson Carl Dolan Lewis is in John's Rite-13 Sunday School Class.
John and Mary Clapp
July 12, 2009
My balogny has a first name.... what a great man and company that touched every American heart and mind. My sincerest Condolences to a great Business man that made America great! God Speed my friend!
Chad Everson
July 12, 2009
I am sad to hear that a man who was with a wonderful company has passed. May he be remembered always for the jingle, and the wonderful product that the company put on the dinner tables across the nation. In honor of him, I wore my hotdog earrings. Made people smile. J. P., Pennsylvania
J Potts
July 10, 2009
I remember Oscar & Rosalie well from a trip we took on the Baltic Sea back in 1996. He was every bit the gentleman to be partnered with a truly elegant lady. Among many rememberances I recall one morning of really rough seas off of Danzig (Gdansk) Poland, with the boat pitching and yawing, Everyone was terribly seasick except for Oscar, Rosalie and myself. WE DECIDED TO HAVE BREAKFAST AND ATE FRIED EGGS, HASH-BROWNS, HAM AND BACON AND SAUSAGE (OF COURSE) while crockery and glassware all around us wound up on the floor. What fun we had!
I will miss Oscar so much, but I'm glad for the memories. Condolences to his family.

Peter Maren
Woodridge,Il 60517
July 10, 2009
My sincere condolences to the Mayer family.
Gail Harinek
July 10, 2009
SCOTT CHAMBERLAND
July 9, 2009
A splendid fellow. A man with vision & execution. The likes of Oscar are hard to find these days.