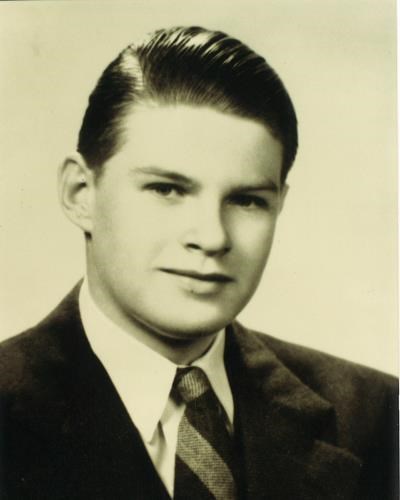 He was preceded in death by his cherished wife, Helen, and two beloved children: his oldest daughter, Kathleen and first born son, Patrick.

Vernon grew up in the Austin neighborhood of Chicago, and later in Oak Park and River Forest. He graduated from Fenwick High School in Oak Park in January, 1944 and was inducted into the US Army in February, 1944. Upon completion of basic training, Vern was selected for additional training in Army Intelligence and Reconnaissance (I & R). He was assigned to the 222nd Regiment of the 42nd Infantry Division, and deployed to Europe in December, 1944. He experienced 106 days of combat, and was among the liberators of the Dachau concentration camp. His role in the I & R was dangerous, requiring him to penetrate enemy territory to report on German troop movement and to radio in coordinates for U.S. artillery strikes. Vern was decorated for valor and heroism, including a Bronze Star and a Presidential Unit Citation. At only 19 years of age, he achieved the rank of sergeant, and during his 18 months overseas, became fluent in German. Vern rarely talked about the war until he was 90 years old, when he began to open up about what he had experienced. Last year, "the Old Sarge" was recognized by the Chicago Bears as its 2020 Salute to Service Honoree.

Vern exemplified the "Greatest Generation": fierce devotion to his faith, family and country, and an incredible work ethic. After the war, Vern had hoped to continue his education. His plans of being a full-time student were soon dashed, when it became apparent that he was needed at the family business, which had struggled during the war. Without complaint, Vern worked as a laborer during the day, and took night classes at Loyola University. Although he was never able to complete his degree, Vern treasured the education he received there.

In the fall of 1948, Vern met the love of his life, 20 year-old Helen McCormick. They married in 1951, and remained devoted to each other during their nearly 70 year marriage. The strength of their marriage and the depth of their love for each other was clear to all who knew them.

Vern never regretted forgoing his college dreams to help bolster the family business. During the post war years, his insistence on upgrading equipment and modernizing operations were instrumental in allowing the company to once again flourish and reach unprecedented success. Vern retired as President of Central Ink Corporation in 1986, with his brother Richard succeeding him in that role.

Vern and Helen enjoyed extensive travel with the family in tow, and particularly treasured their winter months in Naples, Florida, or boating and snowmobiling at their vacation home in Michigan. Epic road trips were not unusual. He loved nothing more than piling the family into the station wagon and hitting the road. Whether it was to Mexico, Maine, Yellowstone or the Florida Keys, (all in remarkable 8 day round trips from Glen Ellyn), he prized every minute of that time with family. Air travel was reserved for destinations that weren't reachable otherwise.

A sports enthusiast bar none, Vern was an avid fan of the Chicago Cubs, the Fenwick Friars, Notre Dame and Chicago Bears football teams. Backyard touch football games were a given on any fall weekend, and taken very seriously. The local ER should have thanked him for the regular business sent their way. In the 60's, Vern built a spectacular baseball field in the backyard, complete with pitcher's mound, sand infield and a back stop, making the Breen yard a favorite destination for neighborhood children and teens.

Vern was a life-long learner until the end; he was always curious about the world, its people, politics and culture. He devoured history books and biographies. Vern embraced a good debate, always wanting to hear other points of view, recognizing it as the only way to gain the depth of understanding that he craved.

A devoted father, despite the demands of his work schedule he never missed a dance recital, a school performance, or a single one of his son's baseball and football games, from youth programs through college.

Vern always was always a remarkably determined person. There was no obstacle he wouldn't attempt to conquer. He was steadfast, a man you could count on. There is no better example than his unyielding commitment to his oldest daughter. When Kathy was born with an intellectual disability in 1952, during an era when special needs children were routinely institutionalized, Vern and Helen were strongly encouraged to place Kathy in a residential facility. That proposal was firmly rejected and they vowed to keep Kathy within her own loving family, no matter what the challenges were. That promise was kept until Kathy's death at age 57. Vern has been an inspiration to all of us. There are simply no words to express how much he loved, and was loved by his family.

Vern was a loyal friend who maintained extraordinarily close lifetime friendships, and continued to develop wonderful new friendships at each stage of his life. He made full use of his Irish "gift of gab", regaling his grandchildren with marvelous tales made up on the spot. His elaborate, legendary pranks provoked laughter, not outrage, and will always be retold by family and friends.

The family would like to thank several individuals who have been instrumental in providing help, love and support to Vern during recent years: Nick Pitocco and Father David of St. James Parish; Heidi Mathew, Nurse Practitioner, Northwestern Medicine; Fr. Kenneth Zigmond, and most of all, Saturnina "Santha" Domingo. As Vern's full time caregiver for the last 3 years, we have been grateful for her professionalism and skill, and awed by the compassion, respect and love she bestowed upon Vern. If angels walk among us, then Santha must surely be one of them. We will never be able to thank her for the depth of her caring and the sacrifices that she made, but we hope that Santha is comforted by the fact that she made such a difference, and was so loved by our father and the entire family. You will always be in our hearts.

Leonard Memorial Home of Glen Ellyn will be handling arrangements. A Mass of Christian Burial will be celebrated on Tuesday, December 21, at St. James the Apostle Catholic Church in Glen Ellyn, preceded by visitation at the church beginning at 9 a.m. Interment will be at Assumption Catholic Cemetery in Winfield.

In lieu of flowers, donations would be welcomed by St. Mary of Providence, 4200 N Austin Boulevard, Chicago IL 60634. St. Mary of Providence is a nonprofit residential and day services facility whose mission is to help people with developmental disabilities meet life's challenges and reach their highest potential in spiritual, emotional, mental and psychological growth, at the same time promoting their dignity as human beings.

Published by Chicago Tribune on Dec. 19, 2021.
To plant trees in memory, please visit the Sympathy Store.
MEMORIAL EVENTS
Dec
21
Visitation
9:00a.m.
St. James the Apostle Catholic Church
IL
Dec
21
Mass of Christian Burial
St. James the Apostle Catholic Church
Glen Ellyn, IL
Funeral services provided by:
Leonard Memorial Home - Glen Ellyn
MAKE A DONATION
MEMORIES & CONDOLENCES
3 Entries
So sorry to hear of your Dads passing Tom. His life story sounded very fulfilling. Very few of the lifelong Chicagoans left anymore. Hope you´re doing well.
Deb Russo
Other
December 23, 2021
Dear Tom and Maureen, I´m so sorry for your loss. It´s been years since I´ve been his neighbor, but I remember him as such a nice man with a beautiful smile. I will keep you and your family in my prayers.
Susan (Krynicki) Skryd
December 21, 2021
So sorry for you loss. It seems like 100 years ago when we played and coached boys baseball in Glen Ellyn. Time flies. "The Ranks are Getting Thinner" Wayne & Flo Kolar
Wayne & Florence Kolar
Friend
December 19, 2021
Showing 1 - 3 of 3 results