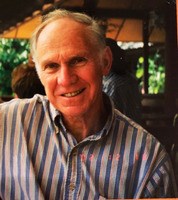 ABOUT
Brooklyn Technical High School
FUNERAL HOME
Abraham L. Green & Son Funeral Home
88 Beach Road
Fairfield, CT
Lawrence Zuckerman
Lawrence Humphrey Zuckerman, 89, of North Branford, CT and formerly of Trumbull, CT, passed away on March 28, 2021 at home surrounded by his loving family. Larry was born in Brooklyn, NY, the eldest son of Min and Max Zuckerman.
After graduating from Brooklyn Technical High School, Larry earned his bachelor's degree from Brooklyn College. He then joined the US Army and served during the Korean War. After serving his country for two years, he earned his MBA from the University of Michigan. Larry began his professional career with General Electric, working for them in marketing and product development for over twenty years in Schenectady, NY, Rome, GA and Bridgeport, CT. His career also included a few years at the SC Johnson Company in Racine, WI and the Timex Corporation in Greenwich and Waterbury, CT. In the late 1970's, Larry realized his dream of opening and operating his own marketing research firm, Zuckerman Research Inc., which he ran until he retired in 1996.
In 1958, Larry married the love of his life, the former Adele Burack. This May, they would have celebrated their 63rd anniversary. Together, Larry and Adele raised three children, Jacqueline, Craig and Andrea.
After retirement, Larry and Adele traveled throughout the world and also enjoyed spending time at their vacation home in VT. Larry volunteered as a literacy tutor in Bridgeport and with Habitat for Humanity. He and Adele were active members of Congregation B'nai Israel in Bridgeport.
Larry was an amazing husband, father and grandfather. He never said a mean word about anyone and he was truly loved by everyone who knew him. His kindness and generosity were his biggest attributes. He will be forever missed but will live in the hearts of Adele, Jacqueline and her husband, Robert Tynan, and their daughters Megan and Emily, Craig and his wife, Teresa, and their daughters Madelyn and Shelley, and Andrea and her husband Eric Stutman and their children, Rachel and Jason.
Larry was predeceased by his parents, Min and Max Zuckerman and his brother, Paul. A private graveside service will take place in New Jersey on Wednesday, March 31, 2021. Please visit www.greensfuneralhome.com for more information and to view a livestream.
Memorial contributions may be made to VNA Community Healthcare and Hospice, 753 Boston Post Road, Guilford, CT 06437 or the Alzheimer's Association, 2911 Dixwell Avenue, Hamden, CT 06518.

Published by Trumbull Times & Connecticut Post on Mar. 29, 2021.
To plant trees in memory, please visit the Sympathy Store.
MEMORIAL EVENTS
Mar
31
Graveside service
livestream
www.greensfuneralhome.com for more information, CT
Funeral services provided by:
Abraham L. Green & Son Funeral Home
MAKE A DONATION
Please consider a donation as requested by the family.
MEMORIES & CONDOLENCES
Sponsored by Abraham L. Green & Son Funeral Home.
4 Entries
Kind, generous, professional, a rare "giving" individual I had the pleasure of working with.
Russell Dusek
Work
July 29, 2021
Larry always had a smile and a kind word. So sorry for your loss.
Adrienne & Bill Shepard
Neighbor
April 1, 2021
Larry was a wonderful person and will be fondly remembered by all that knew him.
Robert Tynan
Friend
March 30, 2021
Dear Adele and family,
I was truly saddened to read of Larry's passing. I hope it was a
peaceful transition to Heaven. I can honestly say that I have never known a nicer man. Having people like Larry and you for customers made my
25 years at MacKenzie Pharmacy a pleasure. Although your hearts are heavy, try to remember the countless wonderful days that you shared
Mike Lane
Friend
March 30, 2021
Showing 1 - 4 of 4 results