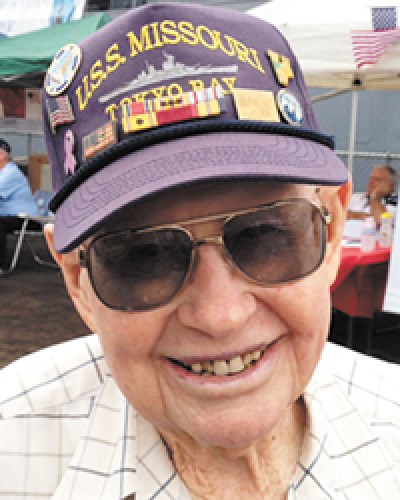 Ernest (Ernie) Russell Thompson of Gardena, CA passed away on Thursday, November 3, 2016 at his home of 60 years, shortly after celebrating his 99th birthday among family and friends. Ernie, known affectionately as "Grandpa" by family and friends alike, was born October 26, 1917 in Byronville, Dooly County, GA, and is the oldest son of the late Lavalia Peavy and Russell Thompson. He moved to Americus, GA at an early age and received his education in the Americus public schools. His parents were from Dooly County, GA, and he is related to the Thompson, Peavy, Morgan, and Bowen families of that area. Through the Morgans of Macon County, GA, he is descended from George Cadogan Morgan and Richard Price, D.D., F.R.S., 18th century polymaths and dissenters in the United Kingdom.
Ernie joined the US Navy in 1936 at the age of 19, and was assigned to the USS Tennessee (BB-43). He married his wife Ruth on November 23, 1940, and left the Navy in December of 1940. In 1942, he went to work for the City of Los Angeles Department of Water and Power.
After learning of the December 7, 1941 bombing at Pearl Harbor, Ernie rejoined the US Navy in November 1943. He was assigned to a small crew on the USS Missouri (BB-63) "The Mighty MO" to commission America's newest battleship (at the time) being built at the Brooklyn Naval Yard. He and his wife attended the launching of the Mighty MO on January 1944. Ernie sailed on the MO through the Panama Canal in November 1944, and eventually into the South Pacific Ocean. Stationed in Fire Room #4 as Watertender First Class during World War II, he was at the battles of Iwo Jima and Okinawa, where he saw his fireroom fill with smoke when a kamikaze struck the ship. He witnessed the signing of the Japanese Instrument of Surrender aboard the Mighty MO in Tokyo Bay on September 2, 1945.
In late 1945, after his military service completed, Ernie and his small family settled in Gardena, CA, and he resumed his job with the Department of Water and Power. After 39 years of employment, he retired in 1981 as their Steam Plant Maintenance Supervisor of the Scattergood plant in El Segundo, CA. He and Ruth spent the remainder of their years together traveling the world and visiting more than 40 countries, including the Soviet Union prior to its dissolution.
After Ruth's passing in 2000, his daughters and 4 grandchildren traveled extensively with him, continuing to travel the world as well as attend his WWII association reunions. Since 2012, Mr. Thompson served as a crewmember at the Battleship IOWA Museum in San Pedro (where his grandson is the CEO and President), regaling the staff, volunteers and visitors with stories of his time in the military.
He was predeceased by his parents, his wife of 59 years, Ruth Helen Thompson, sister Virginia (Sis) Williams of Columbus, GA, brothers Emory (Dig) Thompson of Macon, GA and Harry Thompson of Leslie, GA. He is survived by his sister Joyce Thompson Stovall of Tallahassee, FL, brother Ray (Buddy) Thompson (Rhoda) of Leslie, GA; his daughters Dorothy Hazel (Gary) of La Cañada, CA and Kathleen Appellof (Carl) of Santa Rosa, CA; his grandchildren Kimberly Paternoster (David Parker) of Point Richmond, CA, Suzanne Oppenborn (Chris) of Pasadena, CA, Dianne Tag of San Diego, CA, and Jonathan Williams (Shelley) of Linden, CA; and his five great-grandchildren. The family thanks Dr. Michael Barnum of Kaiser Permanente, his caregivers Perle Saluna and Katrina Thomas, and his neighbors for their care, support and love.
Dad, Grandpa, GG, Ernie – WE REMEMBER.
Ernest's family asks that in lieu of flowers that donations be sent to: The Ernest R. Thompson Memorial Fund, Pacific Battleship Center, 250 S. Harbor Blvd., San Pedro, CA 90731 or online at http://www.pacificbattleship.com /donations. If donating online, please put Ernest R. Thompson's name in the "In Memory Of" field. Contributions will be used towards building a Battleship IOWA Memorial Display for Museum Crewmembers that have passed away and the Battleship MISSOURI in Pearl Harbor to honor his service. Please sign the guestbook at www.dailybreeze.com/obits.
Published by Daily Breeze on Nov. 13, 2016.
To plant trees in memory, please visit the Sympathy Store.
MEMORIAL EVENTS
To offer your sympathy during this difficult time, you can now have memorial trees planted in a National Forest in memory of your loved one.
MAKE A DONATION
MEMORIES & CONDOLENCES
Sponsored by Daily Breeze.
3 Entries
I just watched the episode of you on Inside Edition. You are an American Hero. The best of the best. Thank you for your Honorable, Dedicated Service, Sir. May you Rest In Peace.
Pamela Kunert
Friend
June 8, 2021
I was saddened to read of your loss of Ernie (We always called him Tommy). At the same time it brought back great memories of our times working together at Scattergood. Tommy was well liked by all due to his good nature and practical knowledge. To those who worked for him he was a friend and not a boss, and his crews loved working for him.
I enjoyed reading about Tommy's Navy experience, which he never talked about. Tommy was too humble of a southern country boy to ever talk about himself.
My condolences to his family for your loss of a great man.
Dick Learman
November 15, 2016
I miss you so much grandpa. Thanks for being the best grandpa. I will see you in my dreams. Love you.
Kim Paternoster
November 13, 2016
Showing 1 - 3 of 3 results