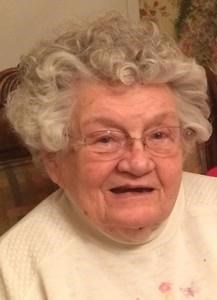 BORN
1927
DIED
2019
ABOUT
New Paltz High School
FUNERAL HOME
Copeland-Hammerl Funeral Home
162 S Putt Corners Rd
New Paltz, NY
Marguerite Ashton Sutton, age 91, formerly of New Paltz, passed away on Nov. 26, 2019 in Johnson City, N.Y. She was born on Nov. 27, 1927, the daughter of the late Edward and Maude (Van Nostrand) Ashton.Marguerite graduated from New Paltz High School in 1944. On Nov. 20, 1949, she married Clayton N. Sutton. She began working in the Bursar’s Office at SUNY New Paltz in 1946, where she worked for 38 ½ years before retiring. Marguerite always said that she took the students money with a smile and a thank you. She had an active retirement of volunteering at Kingston Hospital, Rondout Valley Food Pantry, and Twice Blessed Thrift Store. She enjoyed traveling, walking, doing puzzles, playing bingo, and spending time with her family. She always had a house full of children, and frequently took her grandchildren, nieces and nephews to the pond at SUNY New Paltz to feed the ducks. She was “famous” for her chocolate chip cookies, which she said were just the recipe on the package, but no one else could ever duplicate them. Whether it was baking or volunteering, she did everything with love and it showed.In 2014, after living in Ulster County for her whole life, she moved to Woodbrook Assisted Living in Elmira, N.Y. to be closer to her family. In 2017, she moved to Susquehanna Nursing & Rehabilitation Center in Johnson City, N.Y. The staff of both Woodbrook and Susquehanna often said that they are not supposed to have favorites, but Marguerite was their favorite resident. She brought a smile to the face of everyone she met.She is survived by her daughter, Diane Schoonmaker; grandchildren, Jason (Penny) Schoonmaker and Tami (Paul) Bogausch; great-grandchildren, Jack and Caitlin Schoonmaker and Cassie and Joseph Bogausch; nieces and nephews, Kim (Chris) Swierczewski, Kelleigh (Scott) Wasser, Sherry (Arnie) Smith, Scott Sutton, Stacey (Dave) Alecca; and many extended family and friends. She was predeceased by her husband in 1967; her four brothers - Edward, Frederick, James, and D. Bruce Ashton; her son-in-law, Steven Schoonmaker; and her nephews, Frederick Ashton and Todd Smith.There will be a graveside service at 11 a.m. on Wednesday, Dec. 4th at High Falls Cemetery, Berme Rd, High Falls, N.Y. followed by a reception at 1 p.m. at the Reformed Church of New Paltz. In lieu of flowers, donations can be made to Reformed Church of New Paltz, 92 Huguenot St, New Paltz, N.Y. 12561 or to the backpack program at Rondout Valley Food Pantry, PO Box 22, Stone Ridge, N.Y. 12484.Copeland-Hammerl Funeral Home, 162 South Putt corners Road, New Paltz, N.Y. 12561 is honored to assist the family of Marguerite with the arrangements. http://www.lastingmemories.com/marguerite-ashton-sutton
Published by the Daily Freeman from Nov. 27 to Dec. 1, 2019.
To plant trees in memory, please visit the Sympathy Store.
MEMORIAL EVENTS
Dec
4
Memorial Gathering
1:00p.m.
Reformed Church of New Paltz
92 Huguenot St, New Paltz, NY
Dec
4
Graveside service
11:00a.m.
High Falls Cemetery
Berme Rd, High Falls, NY
Funeral services provided by:
Copeland-Hammerl Funeral Home
MAKE A DONATION
MEMORIES & CONDOLENCES
Sponsored by dailyfreeman.com.
0 Entries
Be the first to post a memory or condolences.