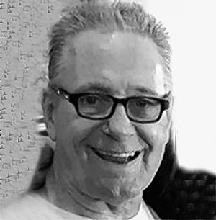 Jack P. Hamilton II, 77, of Dayton, Ohio, was called home by The LORD on September 26, 2021, after a brief illness. He was born in Tulsa, Oklahoma, and spent his youth in Indiana. He is survived by his wife of 42 years, Cynthia (nee Jackson), son Jack P. Hamilton III (wife Prissy), sister-in-law Sharon Callahan, brother-in-law Jeffrey Jackson, and his grandchildren Nolan, Reid, and Myra, as well as the cherished young people fostered in his home who generously shared their families with Jack. He was preceded in death by his parents Jack and Virginia Hamilton; his mother-in-law Wilma Jackson; father-in-law Neil Jackson, and brother-in-law Timothy Callahan. Jack certainly would like all to remember that he was preceded in death and survived by a host of beloved pets. Folks may remember Jack as a graduate of Ball State and Indiana University, musician (Chosen Few, The Force, Invincibles, Juke Joint and his recent independent recordings), teacher (junior high school business and careers), or fixture at the local piano store, but more likely he's remembered as the most cheerful, entertaining man who tuned your piano and a bright light at any gathering he attended. Jack discovered his love of bringing a piano to its very best tune in 1978 and he never worked a day in his life after that. It was his pleasure to improve each instrument he encountered. As a performer, it was much the same (except the load-in/load-out). Jack was nostalgic and even his new songs featured the sound of early blues, jazz and rock-n-roll music. Most interesting was his engagement of onlookers, be it on stage or in the piano owner's home. A constant personality, Jack just naturally generated fun and the joy we all found through him should be passed along. No public services will be held due to circumstances of health, but the family asks everyone to enjoy or perhaps even compose a piece of music on October 11, 2021, with a special sentiment or prayer of thanksgiving for the entertainers, long-suffering spouses, caring parents, and eternally compassionate pet lovers in this world. In lieu of flowers, please donate to your religious institution, Hospice of Dayton, or PCAA (Preventing Child Abuse America).Online condolences may be directed to:

Published by Dayton Daily News on Oct. 3, 2021.
To plant trees in memory, please visit the Sympathy Store.
MEMORIAL EVENTS
To offer your sympathy during this difficult time, you can now have memorial trees planted in a National Forest in memory of your loved one.
MAKE A DONATION
Please consider a donation as requested by the family.
MEMORIES & CONDOLENCES
4 Entries
Dear Cindy: We were so very sorry to hear of Jack's death. We always looked forward to his visits: he was such great fun to be around, full of musical knowledge, and a wonderful musician who entertained us each time he visited. We'll miss him greatly. Our deepest sympathies to you and your family.
Jeff and Wendy Horwitz
Friend
December 20, 2021
Cindy, Please know that you and your family are in our thoughts, prayers and hearts. I will surely miss our little chats as you scheduled Jack's visits. Jack was the first piano tuner that I looked forward to having tune my piano. He could make my piano sing. I will miss his visits. May you experience comfort and peace through the love of family and friends.
Nancy Fratini
Work
October 9, 2021
Cindy, I´m so very sad and shocked to hear of Jack´s death. I always enjoyed when he came over to tune my piano. He was the best and I don´t know what I´ll do about getting it tuned. We had such wonderful conversations at the end of the tuning, which I always knew were complete when he started improvising on the piano. I loved it! He will be sorely missed.
Madelon Kinzig
Other
October 8, 2021
cindy; jack was a good friend of mine i'll always cherish his friendsahip a friend and good fan; Fritz
Fritz
October 3, 2021
Showing 1 - 4 of 4 results