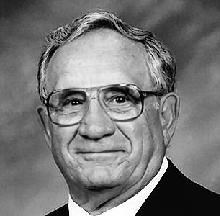 It is with great sadness that the family of Theodore "Ted" R. Strickland, loving husband, father, grandfather and great-grandfather, announces his passing on Thursday, December 3, 2020, at the age of 91. Ted was born on August 26, 1929, in Denison, TX, to Robert Earl and Rhoda (DeLatte) Strickland. He graduated from the United States Naval Academy in Annapolis, MD, in 1955. He was a member of USNA 2nd Company. After graduation Ted took his commission as an officer in the United States Air Force. He was stationed at Kessler AFB, Pepperrell AFB, and finally Wright Patterson AFB where he spent the majority of his career working as an Electronics Engineer. Ted eventually moved to civilian service and he was awarded the Outstanding Civilian Career Service Award. Among other notable career accomplishments, that involved pioneering the development of weapon delivery systems and developing avionics systems architectures for aircraft such as the F-15, F-16 and F-111, Ted served as the Chief Avionics Engineer for the Advanced Technology Bomber aka B2 Stealth Bomber. When not at work, to occupy his brilliant mind, Ted had an affinity for crossword puzzles and would spend hours solving them. This was the go-to gift from his family for Christmas and birthdays. He loved fishing and spent time each summer with a group of close friends in Canada on an annual fishing trip. Ted also enjoyed playing golf, and family vacations, traveling all across the United States. He especially enjoyed time spent with his five granddaughters. Ted was known for his quick wit, his infectious smile, and his kind and compassionate spirit. Ted was preceded in death by his parents, Robert Earl and Rhoda Strickland; his brother, Lee Earl; and his sisters, Marie and Josephine. He is survived by his wife of 65 years, Ruth; his children, Deborah, Patricia (Scott) and Theodore (Jennifer); granddaughters, Emily (Chris), Sarah, Victoria, Stephanie (Kevin) and Allision (Beau) and great-grandchildren, Adam, Allison and C.J.; along with numerous nieces, nephews and other family members that he loved dearly. Visitation for friends and family will be from 11:00 to 12:30 followed by a funeral service at 12:30 pm on Wednesday, December 9th, 2020, at Tobias Funeral Home – Far Hills Chapel. Interment will follow at David's Cemetery. In lieu of flowers the family suggests donations be made in Ted's memory to the Alzheimer's Association - alz.org. Online condolences may be sent to www.tobiasfuneralhome.com
Published by Dayton Daily News on Dec. 6, 2020.
To plant trees in memory, please visit the Sympathy Store.
MEMORIAL EVENTS
Dec
9
Visitation
11:00a.m.
Tobias Funeral Home - Far Hills Chapel
5471 Far Hills Ave, Dayton, OH
Dec
9
Funeral service
12:30p.m.
Tobias Funeral Home - Far Hills Chapel
5471 Far Hills Ave, Dayton, OH
Dec
9
Interment
David's Cemetery
OH
Funeral services provided by:
Tobias Funeral Home - Far Hills Chapel
MAKE A DONATION
Please consider a donation as requested by the family.
MEMORIES & CONDOLENCES
Sponsored by Tobias Funeral Home - Far Hills Chapel.
3 Entries
To the Strickland family.
Ted was my room-mate for our last two years at the Naval Academy. He was captured by the Air Force, and I found my way to our Navy. Our friendship could not have been more solid. He was kind, gentle and smart, mentoring me in the finer arts of math and physics. My very sincere condolences to you. Ted was was a shining example for his classmates and he well be remembered, long after this sorry time.
Wally Olsen, Class '55
Wally Olsen
Classmate
December 13, 2020
Dear Mrs. Strickland, Debbie, Trisha, Ted and family, so sorry to hear about Mr. Strickland passing. Always such fond memories of our families growing up on Lantern Glow Tr, and our dad's smoking cigars together on the sailboat. Mom and dad are still in their house. Dad wanted to come to the service but was unable. Much love and sympathy to you all. Sincerely Yvonne DeCamp Smith
Yvonne Smith
Neighbor
December 9, 2020 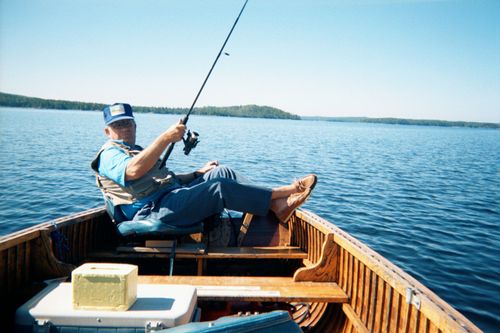 Ted will be greatly missed. Here's another picture from when he and Dad were fishing together.
Mark Longbrake
Friend
December 9, 2020
Showing 1 - 3 of 3 results