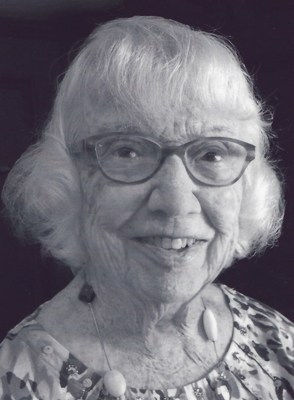 Wilmington - Margaret Canby Gause Bramble, age 100, passed away on April 2, 2020 at Forwood Manor in Wilmington, Delaware. She was the daughter of the late May (Hanly) and James Harlan Gause, and was preceded in death by her brother, James Harlan Gause, Jr. and her husband of 65 years, Ed, who died in 2008.

Known throughout her life as "Peg", she was a direct descendant of Joseph Tatnall, a Quaker flour miller in Brandywine Village, who supplied George Washington's troops during the Revolutionary War and hosted him at the house he built in 1770 at what is now Lafayette Court, 1803 Market Street, Wilmington.

She had a life-long interest in genealogy and was a long-time member of the Delaware Genealogical Society.

She was a native Wilmingtonian and was a 1938 graduate of P.S. duPont High School, of which she organized the 20th and 50th reunions of her class.

She attended Beacom College and was employed at Diamond State Telephone Company and Hercules Powder Company, before joining the DuPont Company's engineering department in 1945. After 32 years of service, she retired in 1977 from DuPont's Louviers facility, in Newark, Delaware, as an administrative secretary in the Construction Division. She served for ten years as Co-Chair of the annual May luncheon of the Women Who Worked at Louviers group.

An avid traveler, Peg and her husband, Ed, made trips to many parts of the world and were particularly fond of the United States National Parks, having visited over half of them.

In addition to traveling, she enjoyed photography, reading, and gardening. Her Deerhurst home and garden have been included in the Wilmington Garden Day Tour.

For many years, she served on DelDOT's citizens committees, and was cited in 2007 for seven years of service on the Blue Ball Properties Project. She was very active in the Deerhurst Civic Association, having served as its President and organizer of its 50th Anniversary celebration in 1994.

Peg is survived by her two nieces in Texas, her two nephews in Florida , and many treasured friends.

Heartfelt thanks to her personal aides the staff at Forwood Manor for their considerate and compassionate care.

At Peg's request, there will be no services, and it was her desire that people celebrate her life and all of the good times by sharing a special meal in her memory. Her ashes will be scattered privately.

In memory of Peg, contributions may be made in a charity of your choice.

to be a happy one.

of smiles when life is done.

whispering softly down the ways.

Of happy times and laughing times.

And bright and sunny days.