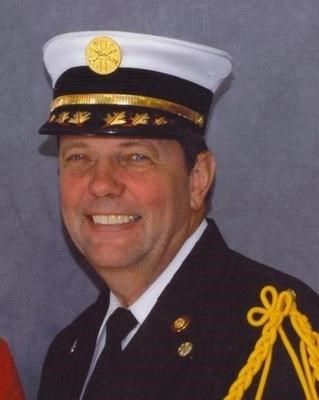 Parsonsburg-PARSONSBURG -- Steven "Steve" Edward White, 60, of Parsonsburg peacefully passed away at his home on November 5 surrounded by family and friends he so dearly loved after a brief fearless battle with melanoma.

As the fire chief for twenty years, Steve was the volunteer fire and emergency medical services' strongest advocate. He knew that the greatest investment he could make was in people -- good people. Steve knew good people are the bedrock of the volunteer fire service, and good people, above all else, are necessary to ensure the safety of the community.

Steve's commitment to quality fire and emergency medical service has been seen and felt locally and statewide. Parsonsburg Volunteer Fire Company's new state of the art facility, dedicated in November 2010, is the direct result of his commitment and passion. It was through Steve's extensive fundraising efforts and lobbying that the community's need that was but a dream became a reality.

Most recently, Steve served on the Volunteer Company Assistance Fund Committee for the Maryland State Firemen's Association and dedicated many hours working with other volunteer fire companies to acquire grant funding and low interest loans for much needed equipment. Steve was a past President of the Wicomico County Fire Chief's Association, and served as Chairman of the Emergency Medical Services Committee and the County Executive Advisory Committee. Steve was also a trustee of the Wicomico County Volunteer Firefighter's Association, and a member of the County Council Liaison Committee. Steve has testified before both houses of Legislature to advocate for funding of volunteer companies.

Steve quietly led by example, instilling integrity, work ethic, the love of helping others, the value of living a simple life and lifesaving skills into his fellow brothers and sisters in the fire service. For all of his contributions and achievements, Steve's greatest was the scores of young people he mentored, recruited and believed in. He was instrumental in creating the Firefighter/Emergency Medical Technician vocational program at Parkside High School through the Maryland Fire and Rescue Institute which allows high school students the opportunity to begin building their careers and saving lives by becoming certified in Firefighter I, Emergency Medical Technician- Basic and Hazmat Operations.

Not only did Steve inspire and enable others to save lives, he was accomplished at saving lives, as all emergency first responders do, under extreme stress and pressure. In 2006, Steve received the Star of Life Award from the Maryland Institute of Emergency Medical Services Systems for a complex extrication and rescue of a worker seriously injured eighty feet above the ground inside the Wor-Wic Community College Water Tower.

Steve handled his illness with grace and humor, and with the assistance of what he called "his team." As the residents and interns at Johns Hopkins Hospital made rounds and introduced themselves, Steve would in turn introduce his team that stayed by his side, his beloved wife Debbie, son Ryan, "girlfriend" Carol Fisher, "daughters" Leigh Tyler, Julie Parrish, Jennifer Naugle and Jamie Dykes; his dear friends and transport team Jim Brown, Jeff Willis, Chelsea Massey and Mike Parsons. Cancer took many things from Chief Steve White, but it did not take his sense of humor or dignity.

The support from the community, friends and neighbors during Steve's illness has been overwhelming. The White Family thanks each and everyone who has prayed, visited and brought gifts. Your love and support during this most difficult time is appreciated and will always be remembered.

Published by The Daily Times on Nov. 8, 2015.
To plant trees in memory, please visit the Sympathy Store.
MEMORIAL EVENTS
To offer your sympathy during this difficult time, you can now have memorial trees planted in a National Forest in memory of your loved one.
MAKE A DONATION
MEMORIES & CONDOLENCES
8 Entries
I am so sorry for our communities recent loss. Steve was truly a 'people oriented' person - always there trying to help others. He will really be missed. My Prayers go out to his wife and family.
Johnnie Miller
November 14, 2015
We are so sorry for your loss
Larry and Roxanne Young
November 13, 2015
So sorry for the loss of Chief Steve White. He will be remembered by so many in so many ways. Gone, but never forgotten. God bless his family as they lay him to rest this weekend. Steve is now looking down on us from heaven above and will still be there to guide.
November 12, 2015
Steve is now in heaven with other firemen that have gone before him. His good works will be remembered by all.
Just remember that your memories will always be with you.
Libby Davis
November 9, 2015
Sending my prayers and thoughts to the Steve White Family & many, many friends. Steve was a fireman that you could look up too and he will be missed by so MANY PEOPLE. God Bless!
Edithy Adkins
November 9, 2015
Debbie,Ryan and family!
You are in our thoughts and prayers. As the days go by may your fond memories comfort you at this most difficult time. The heavens have a new angel.He will be there by your side as your guardian angel.
Mark and Carole smith
November 8, 2015
Debbie I am so sorry for this tremendous loss. I am praying for you and your family. May the Lord wrap His arms around you. Wish I was not so far away at times like this. My love and prayers.
Joyce Beauchamp
November 8, 2015
I would like to offer my sincerest condolences for the loss of your loved one. Persevere in prayer and take comfort knowing that "the peace of God that surpasses all understanding will guard your hearts ..." -Philippians 4:7.
John
November 8, 2015
Showing 1 - 8 of 8 results