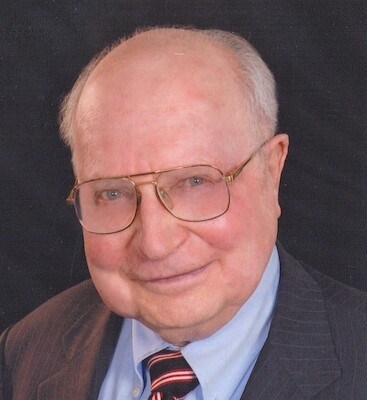 Bloomfield Village - George Herbert Meyer passed away on July 3, 2021 after a brief illness related to a fall. He was born February 19, 1928 in Detroit to Herbert and Agnes Meyer. He is remembered by his friends as being a kind man, enthusiastic and full of energy. George excelled throughout his life. He was a champion marksman in his early years as well as a 3 Palm Eagle Scout. George graduated Phi Beta Kappa from the University of Michigan and then earned his JD in 1953 from Harvard Law School. Upon passing the bar, he was inducted into the United States Air Force as a Judge Advocate General (JAG). He retired as a Major from the Reserves in 1972. When he returned to Detroit, he first practiced law with Fischer, Franklin and Ford. In 1974, he set up his own successful law firm in Bloomfield Hills; Meyer and Kirk. George was an astute, careful and concise lawyer, much admired by his many clients. His expertise was in business law, and later in art and estate law. He was an excellent negotiator. George was an intrepid art collector. He first collected contemporary art and later became an expert in American folk art. This led to his collecting antique folk art canes and writing a book, American Folk Art Canes: Personal Sculpture. His canes were exhibited in several major museums. His collecting interests shifted to early American face jugs which also resulted in a book, Early American Face Jugs. Both books were co-authored with his wife, Kay White Meyer. George was happiest when he was on the trail of a new object and when he was regaling visitors with stories of the treasures he so enjoyed. George served on many boards including: more than 20 years as a Trustee of the American Folk Art Museum, Director of the Associates of the American Wing at the DIA., past president of the American Folk Art Society, member of the Executive Committee of the Detroit Council of Boy Scouts, president of the Prismatic Club and the Cranbrook Writers Guild, as well as being active on the Birmingham Planning Commission and mayor of Bloomfield Village. He also served on the boards of the Detroit Science Center and the Michigan Historical Foundation. George was a member of the Scarab Club for more than 50 years, a member of the Detroit Athletic Club, P.O.E.T.S., the Harvard Club in NYC, and the Birmingham Athletic Club. George loved making puns and telling jokes. He was always excited to share a laugh by retelling a new joke he had just heard. He read the comics to start off every day. The twinkle in his eye was never far away and he looked forward to seeing his many friends. He didn't lie, didn't swear, and did the right thing to the best of his abilities. He followed the golden rule his entire life. He believed that honor and maintaining a flawless reputation were paramount. He is deeply missed by his loving wife, Kay, who he met through a mutual friend and married in 1988. George is survived by his daughter Karen A. Meyer (Bala Nair), his son George Meyer, Jr., (Charlotte) and two grandsons, Patrick and Michael Nair; of whom he was very proud. He is predeceased by a brother, Paul Emmett Meyer. A memorial service will be held on Saturday, August 7, 2021, 11:00 am at Birmingham Unitarian Church, 38651 Woodward Avenue, Bloomfield Hills. Contributions in his memory may be made to the American Folk Art Museum, the Fenimore Art Museum, or the Michigan Crossroads Council of the Boy Scouts of America.


Published by The Detroit News & Detroit Free Press from Jul. 16 to Jul. 18, 2021.
To plant trees in memory, please visit the Sympathy Store.
MEMORIAL EVENTS
Aug
7
Memorial service
11:00a.m.
Birmingham Unitarian Church
38651 Woodward Avenue, Bloomfield Hills, MI
MAKE A DONATION
MEMORIES & CONDOLENCES
1 Entry
Kay, I am so sorry for your loss. I meet you husband once and he seemed like a wonderful and kind man. Judy
Judith Velleman
Family
July 19, 2021
Showing 1 - 1 of 1 results