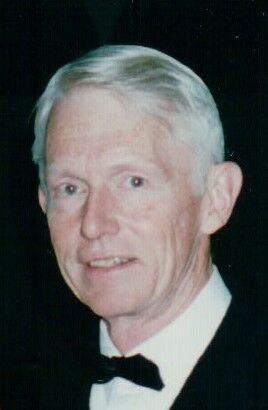 Bob was born in Elgin, Illinois on July 22, 1929 to Ruth and E. Earl McCoy. At the age of 14 he worked at a mink ranch with German POWs. His shared lunches with them led to a life-long love of the German language. He graduated from high school in June of 1947 and attended Lawrence College in Appleton, Wisconsin. While in college he spent a summer at Chaley Colorado camps, where he guided groups of high schoolers up Long's Peak (14,259 feet). He loved the mountain west. He later worked summers at Yellowstone, and he joined the Iowa Mountaineers for climbing trips at Banff and Glacier national parks. After graduating summa cum laude from Lawrence, he attended Medical School at Northwestern University. He graduated with an MD from Northwestern on June 5, 1955. He attended the University of Iowa, completing his residency in orthopedic surgery and a Master of Science degree. During his time at Iowa, he met Bonnie Ellen Amerman. He was pleased to relate that he and Bonnie walked across the commencement stage together as husband and wife, with Bob receiving his degrees and Bonnie receiving her master's degree in nutrition. From Iowa City they moved to Dayton, Ohio, where Bob spent two years as an orthopedic surgeon in the Air Force. The couple then moved to Mason City, and Dr. McCoy joined Surgical Associates. They enjoyed the extended family of Surgical Associates until his retirement in 1992. They were members of First Presbyterian Church for more than 50 years.

When Bob & Bonnie moved to Mason City, they purchased a home two doors up from the Blythe House. When the Blythe house became available, they immediately fell in love with it, and they purchased the home in 1964. Bob had no previous education in architecture, but he soon came to appreciate the cultural gem they happened upon which changed the course of their lives. Shortly thereafter, Professor J. William Rudd from the University of Cincinnati brought a tour group of architecture students to Mason City and asked to be able to take pictures of the Blythe House. That encounter led Bob and Bonnie to a lifetime involvement with Prairie School Architecture research and preservation. Bob referred to Prairie School architectural research as his avocation.

After reading about Walter Burley Griffin, who had moved to Australia to design Canberra, the new capital city, and finding no good historical record of Prairie School Architecture in Mason City, Bob began his local research. After several years, many correspondences and interviews of first-hand participants, Bob published an article in the Prairie School Review entitled "Rock Crest/Rock Glen: Prairie Planning in Iowa". The thoroughness of that research resulted in many correspondences from other architectural historians from across the United States and Australia. Bob then made major contributions to the restoration of the Stockman House and the Park Inn Hotel. The newly restored Stockman House was opened to the public in 1992, and Bob was the Grand Marshall of the North Iowa Band Festival Parade that year. He continued working tirelessly for the restoration of the Park Inn Hotel and establishment of the architectural Interpretive Center adjacent to the Stockman House, which now bears his name.

In addition to his orthopedic practice and his love of Prairie School architecture, Bob loved to spend time with his family and to travel. The family was able to take a vacation in South Hero, Vermont with extended family members every summer. Bonnie was his partner in all of their many adventures and travels throughout their 58 years of marriage.

Bob was preceded in death by his beloved wife Bonnie. He is survived by sons Jamie (Diane), Doug (Sue) and Andy (Julie) and nine grandchildren.

A celebration of life will be held at the First Presbyterian Church on October 30th at 11:00 am. To ensure that all attendees feel safe, the family requests that masks be worn. A live stream will be available. For more information go to the church's website.

In lieu of flowers, donations are encouraged to be given to the River City Society for Historic Preservation, or the First Presbyterian Church.

Published by Globe Gazette from Oct. 23 to Oct. 26, 2021.
To plant trees in memory, please visit the Sympathy Store.
MEMORIAL EVENTS
Oct
30
Service
live stream service
For more information go to the church's website, IA
Oct
30
Celebration of Life
First Presbyterian Church
IA
MAKE A DONATION
MEMORIES & CONDOLENCES
8 Entries
I came to know Bob and Bonnie McCoy through my past work as Executive Director of the Frank Lloyd Wright Building Conservancy. Bob's contributions to the preservation of Wright's work and Prairie architecture are enormous. He, Ann MacGregor and the wonderful people of Mason City are heroes for what they accomplished together for the Park Inn, the Stockman House and Rock Glen. And Bob was a true leader of those efforts in so many ways. Knowing him meant experiencing his bedrock decency, kindness and humility coupled with an energetic passion. "Passion" is often used carelessly but it is exactly and somewhat surprisingly (given his quiet demeanor and determination) the right word for Bob. He was passionate about saving important architecture, passionate in a feet-on-the-ground and a willing-to-do-the-hard-work way. He was and is truly an inspiration as a preservationist and as a human being. Heartfelt condolences to the McCoy family.
Janet Halstead
October 27, 2021
We were very sad to hear of Bob McCoy's death. We came to Mason City in 1978, to join the Orthopedic Department of the Surgical Associates. Bob was one of my senior partners who welcomed us to Mason City, and he became a mentor for my new Orthopedic Surgery practice. Bob and his wife Bonnie introduced us to Mason City, hosted us in their home for dinners, took us sailing on Clear Lake, and they became close friends. Bob had multiple interests in life as his obituary details well. Bob and Bonnie were gracious, wonderful people. They made our community a better place. Our thoughts and prayers are with Jamie, Doug, Andy and their families. Rita and Sterling Laaveg.
Rita and Sterling Laaveg
October 27, 2021
I am so sad to hear about Bob. He and I were resident mates in Orthopaedic Surgery at the University of Iowa. He and his dear wife remained friends with my family over the years. We visited him in Mason City, and I often talked with him about his interest in prairie homes. Bob was an outstanding doctor who saw that his patients received excellent care. He related in a friendly manner to all of those with whom he came in contact. I trust that God gave him an easy passage from this life to the next eternal one. God bless the family. Reginald Cooper M.D.
reginald r cooper
October 25, 2021
The celebration of life will be at 11:00 am at the First Presbyterian Church in Mason City on October 30th.
Andy McCoy
October 24, 2021
So sad to hear about Bob's passing. I only got to work with Bob for a very short time during the infancy of WOTP, but found him to be a great man in so many ways. He taught me a lot, in preservation, history, and of course architecture and FLW. All of which I likely would have never known without the brief but awarding time we got to work together. He will be missed by many.
John Michel
October 23, 2021
My most sincere condolences to the entire McCoy family. Dr. McCoy and Bonnie, in their own way, introduced me to the world of Frank Lloyd Wright, Walter Burley Griffin, Marion Mahony Griffin, and their architectural visions. May our Stillspeaking God comfort and sustain you during the coming days and weeks...
Kevin Young
Other
October 23, 2021
I have many wonderful memories of Dr. McCoy. Through our years of assisting Dr. McCoy, he was a brilliant man. He loved to read and learn. He was always so kind and appreciative and had such a very positive outlook. I am blessed to have known Dr. McCoy and his wonderful family.
Vern Steidl, A Helping Hand Home Care
Friend
October 23, 2021
Bob was a friend and colleague of my dad, Jerry Paulson. He was the first surgeon to join my dad in orthopedics in the early years of Surgical Associates, and he and Bonnie were a great and rewarding part of our lives growing up. He is the reason I went to Lawrence University for college...a momentous decision. His passion for all things Prairie School and his dedication to medicine have made Mason City better for all. A long life well lived.
Jane Paulson Gregerson
Friend
October 23, 2021
Showing 1 - 8 of 8 results