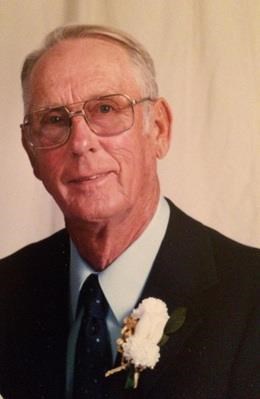 Big Sandy —Allan Pearson, age 85, Big Sandy. Born on October 4th, 1931 to Lloyd and Myrtle Pearson in Big Sandy Montana. He was raised on his family's farm west of Big Sandy, and attended grade school at Mountainview School on the Kennilworth prairie. He attended Big Sandy High School and graduated with the class of 1949. In 1952 he married Shirley Johnson, and two years later began farming. Farming became his life, and a few years later he started a custom spraying business where he provided spraying services to his neighbors and others. In 2007 he became an armchair farmer, continuing to direct the farm from the comfort of his recliner.

Allan's other passion in life was sports. He participated in football and basketball during his high school years. He then went on to play softball, and pitched until he was 58 years old. His love for sports was shared with the community as undying support for his Pioneers. Many athletes have memories of Allan shuttling them to events in his nine seat station wagon, and cheering them on from the sidelines. He never missed his children's or grandchildren's games and traveled across the country to watch them play in college. He cheered on his great-grandkids playing soccer and loved to watch videos of them playing football and practicing gymnastics. He enjoyed talking sports with friends and family, and spent many evenings running through play by plays of the games. Holiday get-togethers at the Pearson house always included a game of Pinochle.

Allan and Shirley enjoyed travel and took many trips across the United States and Canada. Their grandchildren still fondly remember a trip to the Calgary Stampede and the shenanigans that occurred. Their travels led to many Dixieland Jazz festivals and Polkafests. Some Friday nights you can catch a glimpse of Allan and Shirley shuffling across the dance floor on a recording of the Big Joe Polka Show. Allan was also an avid hunter and fisherman. He traveled to the coast to salmon fish, and his moose can still be seen in Pep's.

Allan is preceded in death by his parents, Lloyd and Myrtle Pearson, and his daughter Kathy Ann Pearson.

He is survived by his wife Shirley, his sons Roger (Karolee), Ronald (Gay), Randy, Robin (Cinda), Alandra (Bill) Hill, and numerous grandchildren and great-grandchildren. Funeral services will be held at Christ Lutheran Church in Big Sandy, MT on Tuesday, April 11 at 11:00 am. Viewing will take place at 10:00am. The family asks that Memorial Donations be made to the Big Sandy Senior Center, Big Sandy Medical Center, Christ Lutheran Church, or the Big Sandy Booster Club.


Published by Great Falls Tribune on Apr. 9, 2017.
To plant trees in memory, please visit the Sympathy Store.
MEMORIAL EVENTS
Apr
11
Viewing
10:00a.m. - 11:00a.m.
Christ Lutheran Church
Big Sandy, MT
Apr
11
Funeral service
11:00a.m.
Christ Lutheran Church
Big Sandy, MT
MAKE A DONATION
MEMORIES & CONDOLENCES
8 Entries
Dear Shirley and family,
I am so sorry for your loss. But I am glad I contacted all us "49ers" after the last homecoming and got to visit with Allen. Prayers for you and your family during this difficult time.
Irene Kaiser Williams
April 11, 2017
Allan was a great supporter of Big Sandy Sports he was an icon. He will be greatly missed. Our thoughts and prayers are with the family
Pat and Dan Matthew
April 10, 2017
My heartfelt condolences to the Pearson clan. Allan Pearson will always be remembered. He was firm but with a kind heart. Thank you Mr. Pearson for embracing me and accepting me to your community....
Chloe Masilang
April 10, 2017
Our condolences to the entire Pearson family. He and Shirley raised some great kids. You all are in our thoughts and prayers.
Penny Wilson
April 9, 2017
I have many fond memories of Allen and hanging out with the Pearson family. They were always good to me and welcomed me into their home. As a teenager he was a bit scary to me but always pretty fun to be around. My prayers and thoughts go out to the family in this time of grief.
Henry Goll
Friend
April 9, 2017
I'm very sorry to read of your loss to all the Pearson family I have been blessed to get to know-Robin and Cinda and your 2 kids, Gay and Ron and your 4 kids. What a legacy this man leaves in Big Sandy. Thinking and praying for you at this time. May God richly bless the memory of Dad and Grandpa for you all.
Diane McLean
April 9, 2017
What a Kind Loving Giant, I still remember the summer I was blessed to have shared with the Pearson Family! Rest in Peace Allan and many thoughts and prayers to Shirley and Families. Marla Boyce
Marla Boyce
April 9, 2017
Dear Pearson Family,
We are so sorry for the loss of Allan. I have so many great memories of my godfather. We will always remember his great sense of humor, hearty laugh and his love of his family.
Our thoughts and prayers are with you all in this time of mourning. We are so sorry that we can't be there to celebrate his life with all of you. Please know that we are praying for all of you.
God bless.
Chuck & Connie Simpson
April 8, 2017
Showing 1 - 8 of 8 results