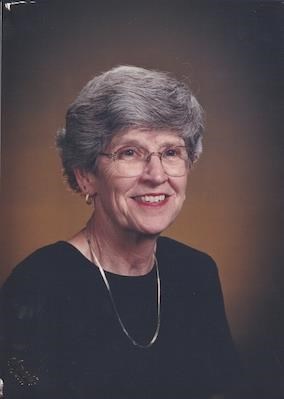 - - Elizabeth S. Halpin, wife of the late James E. Halpin, passed away peacefully at home on July 3 following a courageous battle with cancer. Elizabeth, known as Liz to her many friends, showed the determination and drive in life and spirit that was her hallmark until her final days. Liz is survived by her three children and their spouses, Margaret (Jonathan) Dohnalek, Barbara (Steve) Ingham, and James E. Halpin, Jr, "Jay" (Ellie), and three grandchildren (Grace A. Ingham, James E. Halpin III, and E. Claire Halpin) .

Liz was born in Hartley, Iowa on May 6, 1933, the daughter of Rufus Martin Sheldon and Margaret Anderson Sheldon. She grew up in Iowa, and graduated with a degree in Experimental Foods from Iowa State University. She married James E. Halpin, (Jim) in July 1955, and the couple proceeded to Mexico and later to South America while Jim worked for the Rockefeller Foundation. Following the birth of twin daughters, Dr. and Mrs. James E. Halpin returned to the United States in 1959 and set up residence in Clemson, South Carolina. A son, James E. Halpin, Jr, was born in 1963. Living for 62 years in Clemson, Liz was known as an accomplished hostess, homemaker, and mother. She actively supported her children's interests in organizations like Girl Scouts, extracurricular sports, and volunteered at her church. In 1972, Liz accepted a position at Clemson University in the Department of Food Science. Employment at Clemson University gave Liz years of joy - interacting with students, supporting the state's food industry, and constantly improving her own understanding of food science and nutrition.

Liz is preceded in death by her parents and both of her brothers, her older brother Charles Martin Sheldon and her younger brother James Joseph Sheldon. She will be dearly missed by so many whose lives she touched and impacted. The family requests privacy at this time as plans are made for a Celebration of Life on August 7. There will be a church service at St. Paul's Episcopal Church in Pendleton, SC at 10 AM, followed by a reception at 11:30 AM at Holy Trinity Episcopal Church in Clemson. In lieu of flowers, the family requests donations to be made to Clemson Community Care (P.O. Box 271, Clemson, SC 29633) or to a charity of your choice.


Published by The Greenville News from Jul. 7 to Jul. 9, 2021.
To plant trees in memory, please visit the Sympathy Store.
MEMORIAL EVENTS
Aug
7
Memorial Gathering
11:30a.m.
Holy Trinity Episcopal Church
Clemson, SC
Aug
7
Service
10:00a.m.
St. Paul's Episcopal Church
Pendleton, SC
MAKE A DONATION
Please consider a donation as requested by the family.
MEMORIES & CONDOLENCES
Sponsored by The Greenville News.
4 Entries
I knew Liz as part of the morning crew at Fike Recreation. I met her when I first came to Clemson almost 20 years ago and joined Liz and a select group of morning people who chose to wait outside Fike at 5:30am for the doors to open. Liz was my inspiration. I did not know exactly how old she was for quite some time, but I would always tell her that she was my inspiration. If she could get up everyday to workout then I wanted to as well so that I could be fit and active just like her. As we shared the locker room she always had a kind word and a smile to share. She loved her family and enjoyed her trips to see them. May the Lord comfort all the members of her family in their time of loss. I know Liz is walking a few laps on the streets of gold.
Beverly Leeper
Friend
July 14, 2021
So sorry to hear of the passing of Liz. My thoughts are with her family at this time. Liz was nothing but kind and generous to me for decades. She was a colleague and true friend. James her husband helped me so much during my graduate studies at Clemson and Liz was there as well every step of the way. She was so positive and encouraging and caring and so full of life. It made me so happy to see her everyday during my time in the Food science department at Clemson. Then Liz was so kind and caring to my son who chose to go to Clemson. They would have lunch together many times and they truely enjoyed each other´s company. Liz was such a special person and I will cherish all my memories of her forever. Again my deepest sympathies to all of her family at this time. Peter Westfall
Peter H Westfall
Friend
July 14, 2021
I worked with Liz at Clemson University. She was one of the most kind people I know. She always had a smile on her face. I remember walking the halls of P&A and smelling the most wonderful aromas and I knew Liz was cooking again. She will be missed, and I am thankful to have known her.
Karen
Work
July 14, 2021
I am so sorry to hear about the passing of dear Liz. As a volunteer for United Way of Pickens County, Liz was instrumental in helping us address hunger and homelessness and Pickens County. Family Promise of Pickens County exists because of her commitment, tenacity and investment. What a legacy she leaves for people who are struggling. We will miss her terribly.
Julie Capaldi
Work
July 9, 2021
Showing 1 - 4 of 4 results