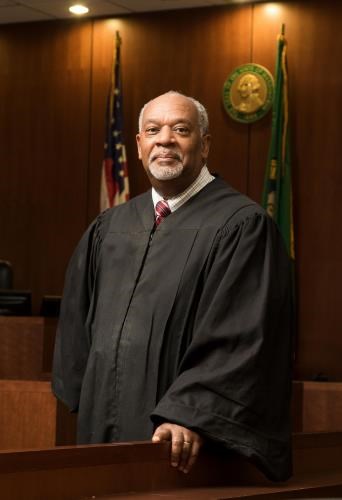 Eric Zebedee Lucas was born on April 16, 1954, to Moyes Sr. and Murphy Lucas at Fairchild Air Force Base. He grew up in Spokane until his family moved to Everett when he was 12 years old. Eric attended Mukilteo schools and graduated in the first graduating class of Mariner High School in 1972. After graduation he attended Stanford University, graduated from the University of Washington with a BA in English and a teaching certificate, and graduated from Harvard Law School in 1986.

Eric started his law career as a King County Deputy Prosecuting Attorney. He went into private practice where he was the City Attorney and eventually the City Administrator for Langley, WA. Eric then served as an Administrative Appeals Judge for the Washington State Department of Ecology. During that time, he served as a Pro Tem Judge for Snohomish County Superior Court. Eric ran for Superior Court Judge and was the first African-American elected to the bench in the fall of 2004. He considered it an honor to serve the citizens of Snohomish County and did so until he retired in December 2020.

Eric was more than his legal career. He was a musician. Eric played the trumpet and guitar and loved to sing. He was a writer who started writing poetry in high school and had his poems published while he was in college later incorporating his poetry into the music he created. But Eric found his voice in his love of writing books. His children's book, Island Horse, was published first. Eric's second published book was a memoir called The Tao of Public Service. He had numerous articles published online and a new children's book was completed.

Eric was also a curious, open minded, and respectful traveler. His trip to Valbella, Switzerland, where he attended a Transcendental Meditation teacher training course in his teen years, was just one of the places that greatly impacted his life. Paris, Madrid, St. Sebastian, Bologna, Florence, Rome and his favorite city in world, Venice…everywhere he went, he breathed in the culture, reflected on the history, and let these experiences enrich and transform him. A person who firmly believed in the daily practice of prayer and meditation, Eric continued to study the spiritual path his entire life and we know his journey continues.

Eric believed in being active in the community. He coached all his sons' soccer, basketball and baseball teams. Over his adult life, Eric was on various boards and commissions for SnoCo Mental Health, Planned Parenthood, Mukilteo Boys and Girls Club, the YMCA, the Boys and Girls Clubs of Snohomish County, Snohomish County NAACP, Snohomish County Legal Services, and Homage. As a judge he served on the State Superior Court Judges Association's Equality and Fairness committee for 16 years and on the Washington State Supreme Court Gender and Justice Commission for 5 years. Eric was particularly proud of his work in the Domestic Violence Work Groups with the State Judges and State Legislature and his mentoring of high school students of color.

Eric touched many lives with his laughter, humor, love, and ideals of justice. He was more than a lawyer and judge, he was a civic leader and a brave pioneer to go where no other would. But ultimately he was a loving husband, a proud father and a doting grandpa. His legacy to the world is in his sons and his grandchildren. There will be a memorial held at a later time. The family asks that in lieu of flowers to please make a donation to the Domestic Violence Services of Snohomish County.