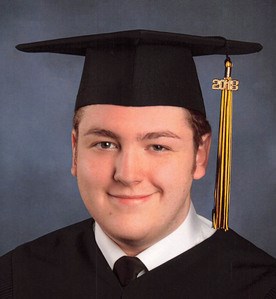 BORN
2000
DIED
2021
ABOUT
Interboro High School
FUNERAL HOME
Cavanagh Family Funeral Home -Norwood
301 Chester Pike
Norwood, PA
COLLINGTON SAMUEL SEAN May 7, 2000 – November 28, 2021 Sam was and will always be his family's hero. He was an accomplished young man who achieved so much in his short life. Sam had such a promising future. All who knew him are devastated by the senseless act that killed him. Sam graduated from Interboro High School, Class of 2018, class president in junior and senior years. He was involved in band, theater, and National Honor Society and was voted Most Likely to Succeed. Sam volunteered tirelessly to raise awareness for the issues that meant the most to him in his free time. When he saw something broken, he wanted to fix it. His senior year, Sam organized a walk-out in solidarity with the Parkland students. He achieved the rank of Eagle Scout and erected a flagpole at the Norwood Library as part of his service to the community. When not working, Sam was an avid camper and fisherman. Sam was hilarious, and he loved to make people laugh. He was attending Temple University with a political science major and a philosophy minor. At Temple, Sam was President of the Political Science Society, VP of the Young Democrats, and volunteered to help people register to vote. In addition, Sam campaigned for Bernie Sanders, worked for the Alexandra Hunt for Congress campaign, and interned for Philadelphia City Commissioner Omar Sabir. As he was just two weeks from graduation, Sam will posthumously receive his undergraduate diploma from Temple. In his final act of selflessness, Sam donated his organs to the Gift of Life so others could live. Sam is survived by his loving parents, Dennis and Molly, his beloved sister Bailey and brother Ryan and his maternal grandfather, John Dougher. Sam is also survived by nine uncles, eight aunts, thirty-eight cousins, and countless friends. He is predeceased by his late grandparents Nancy Dougher and Thomas and Florence Collington. To honor his lifelong pursuit of justice and endless compassion, his family and friends will pursue #JusticeForSam. Sam's family will continue his legacy and life's dedication by building a better, more equal, and more loving world. Funeral arrangements include a viewing Friday, Dec. 3 at CAVANAGH FUNERAL HOME, 301 Chester Pike, Norwood, from 5 P.M. to 9 P.M. Friends will be welcome to offer words Sat. Dec. 4th after 10:00 A.M. at Cavanagh Funeral Home. There will be a vigil held for Sam on Thursday, December 2, 2021, beginning at 4:30 P.M. and ending at 7:00 P.M. The vigil walk will begin at Interboro High School and end at the Norwood Public Library. If you would like to make a contribution in honor of Sam's memory, you may send one by Venmo to @Molly-Collington. Your generosity will be used to cover funeral expenses and to establish a scholarship in memory of Sam. A recipient is yet to be determined.

Published by The Philadelphia Inquirer on Dec. 2, 2021.
To plant trees in memory, please visit the Sympathy Store.
MEMORIAL EVENTS
Dec
3
Viewing
5:00p.m. - 9:00p.m.
Cavanagh Funeral Home
301 Chester Pike, Norwood, PA
Dec
4
Service
10:00a.m.
Cavanagh Funeral Home
301 Chester Pike, Norwood, PA
Funeral services provided by:
Cavanagh Family Funeral Home -Norwood
MAKE A DONATION
MEMORIES & CONDOLENCES
Sponsored by Cavanagh Family Funeral Home -Norwood.
18 Entries
To the Collington family, I am very sorry for your loss. You are in the thoughts and prayers of a family in upstate NY.
Matthew McNulty
Other
December 5, 2021
I will do what I can to bring positive change to society because Sam is no longer here to do so himself. We all can do it for him though, and I think this is what will make him smile that amazing smile down from Heaven upon us. Watch over us, Sam, and continue to lead the way.
Elizabeth S.
Other
December 3, 2021
This is incredibly heartbreaking. Your family will be in my thoughts and prayers. What an amazing young human being taken senselessly. I hope Sam´s legacy of being an exemplary and engaged citizen will help you through this sadness and you find comfort knowing he is in a better realm now.
Blythe Leitz
Other
December 3, 2021
I didn´t know your son but your family is in my thoughts and prayers. I am so sorry for your loss.
Jennifer
December 3, 2021
I am so sorry. One of the last times Rocket played with Piper, Sam was accompanying her. So I got to meet him. A wonderful human being. I'm glad he knew how loved he was by his family.
Robin and Rocket (and husband, John).
Friend
December 2, 2021
Deepest condolences to the Collington family on this senseless and tragic loss. I didn't have the pleasure of knowing Sam, sounds like he was a wonderful man, but do know his grandfather John and my heart goes out to him, Molly, Dennis, Baily and Ryan. You are all in our thoughts and prayers
Mike Sheridan
Friend
December 2, 2021
We are so sorry for your loss - sending prayers
Lynne and Eddie
December 2, 2021
There are no words that will help ease your sorrow. But know that there are so many people who are praying for your family. I am so very sorry.
Tina L.
Other
December 2, 2021
I wasn't sure what to say here, but our loving father in Heaven has embraced this young man, close to his heart of will. God is always with us, and He desires UNITY, I love you Sammy and I will never forget the short time we had together. May our Lord's light shine down with Sam in everlasting life with the Father Almighty.
CHRISTOPHER H DOUGHER
Family
December 2, 2021
This is just the saddest and most senseless thing I have ever read. May you sleep with the angels always! So so sorry for your family's loss of such and amazing son and brother.
TM Collingdale
Other
December 2, 2021
I am so sorry for your loss. Sending prayers to your family that God comforts all of you with his love and strength.
Lisa C.
December 2, 2021
As the days and weeks pass, and as you return to life's routine, may you continue to feel comforted by the love and support of family and friends. Please take comfort in the words found at 2nd Thessalonians 2: 16,17.
DT
December 2, 2021
My deepest condolences to the Collington Family for the loss of your loved one, Samuel Sean, and pray God gives you comfort, peace and strength.
Jo H.
December 2, 2021
I am so, so sorry for your tremendous loss. Sam sounds like he was a wonderful person. May he rest in peace.
Regina McGovern
December 2, 2021
God bless you guy's. We are praying for you... Stay strong ..love you guy's.
Ken Soderland Sr
Friend
December 2, 2021
So sorry for your loss. I didn´t know your son. But reading about him I can understand what a caring and selfless young he was. What a senseless act to take away the dreams of such a promising young man. I will pray for your family and hope someday you find peace. M.J.K.
Michael J. Kelly
Other
December 1, 2021
I never knew Sam, but when I read about this senseless tragedy and then his obituary, my heart breaks for him and his family. My prayers are with you and Sam. I can´t begin to know what you are feeling, but I hope you can take some comfort in knowing he is in the arms of Jesus. I will be making a contribution. I am so sorry for your loss. God bless all of you.
Gina Agnew
December 1, 2021
I am extremely sorry for your loss!
Rob Boyden
December 1, 2021
Showing 1 - 18 of 18 results