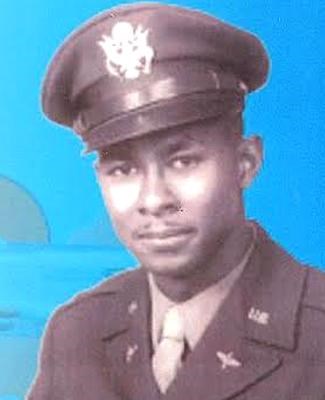 BORN
1924
DIED
2014
FUNERAL HOME
Johnson County Funeral Chapel & Memorial Gardens
11200 Metcalf Avenue
Overland Park, KS
Harvey Alan Bayless, 90, of Overland Park, passed away on April 6, 2014. He was born to the late Harry and Stella Bayless, January 10, 1924 in Frankfort, Ohio. Harvey graduated from Frankfort High School in May 1946. He served in World War II as a 2nd Lieutenant Communications Maintenance Worker for the Air Force. After returning from the war, he married Mamie Wilson in 1945. Harvey graduated from Syracuse University in 1956 with a degree in Physics. He was an Electronic Engineer with the government for more than 37 years. Harvey was one of the original Tuskegee Airmen to receive the Congressional Gold Medal for outstanding military service to our Nation during World War II in 2007. He was a long time resident of Overland Park, a member of Valley View United Methodist Church, Tuskegee Airmen Heart of America Chapter, Military Officers Association of America (MOAA), Air Force Association (AFA), and Life Member of the Institute of Electrical & Electronic Engineers. Harvey is survived by his wife Mamie; two children: Roderick Bayless of San Diego, CA, Kathleen Bayless of Petaluma, CA; two grandchildren and a sister Blanche Brewer of Westmoreland, NY. A visitation will be held from 11 am to 12 pm on Friday, April 11, 2014 at Valley View United Methodist Church, 8412 W. 95th St. Overland Park, KS 66212, with service beginning at 12 pm. Interment will follow in Shawnee Mission Memory Gardens. The family requests that donations be made to the Valley View United Methodist Church. Fond memories and condolences for the family may be left at www.johnsoncountychapel.com (Arrangements by D.W. Newcomer's Sons Johnson County Chapel, 11200 Metcalf Ave, Overland Park, KS 66210. (913)451-1860) www.dwnewcomers.com

Published by Kansas City Star on Apr. 9, 2014.
To plant trees in memory, please visit our Sympathy Store.
MEMORIAL EVENTS
Apr
11
Visitation
11:00a.m. - 12:00p.m.
Valley View United Methodist Church
8412 W. 95th St. , Overland Park, KS
Apr
11
Service
12:00p.m.
Valley View United Methodist Church
MO
Apr
11
Interment
Shawnee Mission Memory Gardens
MO
Funeral services provided by:
Johnson County Funeral Chapel & Memorial Gardens
MAKE A DONATION
MEMORIES & CONDOLENCES
Sponsored by Kansas City Star.
12 Entries
Dear All: Harvey was a blessing. We are all so fortunate that he was ever on this planet. My heart goes out to all of you. David Knepler
May 16, 2014
Kathleen, I am so sorry for your loss. It was a pleasure caring for your father while he was at SMMC. You and your family will be in my prayers during this difficult time. Kerry P (his CA)
April 13, 2014
I had the honor of meeting Mr. Bayless in 2001 at an event honoring the Tuskeegee Airmen & 15th Heavy Bomber crews. I remember him as a very kind true gentleman. Prayers with his family.
Sarah Green - Hord
April 11, 2014
Mamie,

I am so sorry for your loss. Harvey was one of a kind - a true gentleman, a hero in our eyes. It was our honor to be able to call him a friend.
Mary Schantag POW Network
April 11, 2014
Rick, so sorry for your loss. Condolences to you and your family! Love, Alice Dougherty Colasanti
April 10, 2014
I am grateful for the life of Mr. Bayless. Thanks to his service and to the service of others in our armed forces, my family and I have been able to lead our lives in freedom and peace.
Bob
April 10, 2014
I didn't know you, but wish I did.
April 9, 2014
Harvey always had a big smile with a friendly greeting and an offer to help with any project. He was a great next door neighbor and a wonderful friend for 33 years. He will truly be missed. Our thoughts and prayers are with Mamie, Rick, Kathy, Mike, Matthew, Taylor and the rest of his family.
Paul & Ann LaHue
April 9, 2014
Let us love and respect one another the way that Harvey did. We will miss you very much. Harvey: "Gone West but not alone, but into the company of those who have gone before us to welcome us when we arrive"
Mwelvin bradley
April 9, 2014
Harvey and Mamie made us members of their family. Our prayers are with Mamie and the family.
Dana Morgenthaler
April 9, 2014
My prayers are with Kathy and her family.
Tom Abbott
April 9, 2014
I did not know Mr. Bayless but want to extend my sincere thanks to him for serving our country and to extend my sympathies to his family.
Jan Schiller
April 9, 2014
Showing 1 - 12 of 12 results