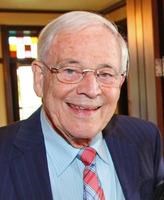 BORN
1932
DIED
2021
Robert Kipp
May 21, 1932 - November 30, 2021
Overland Park, Kansas - Robert Almy Kipp passed away peacefully and naturally on November 30, 2021 in Overland Park, Kansas. Bob was 89 and is survived by his wife of 64 years Debbie and his two sons Steven and David.
Born in Lincoln Nebraska in 1932, Bob spent his early years in Lincoln and Lubbock Texas, before the family settled in Lawrence Kansas. After graduating from the University of Kansas in 1952 with a degree in Civil Engineering, he served as a communications officer in the United States Air Force in the Korean War, stationed at the remote Adak Station on the Alaskan Aleutian Islands in the Bering Sea. Returning to Lawrence, he received his master's degree in Public Administration from KU and began a consequential career in city management. His trajectory took him from Kansas to small towns in Southwestern Ohio (Vandalia and Fairborn) and ultimately back to Kansas City Missouri, where Bob served as the City Manager from 1973-1983 under Mayors Wheeler and Berkley. Kansas City has been home for more than 40 years. He described this work as being "an agent of democracy." Hallmark Cards, then as now an anchor partner in the development of Greater Kansas City, recruited Bob to lead its Crown Center Redevelopment Corporation. In the ensuing years, he held several executive positions in Hallmark and was a director of the Hall Family Foundation, engaging in a wide range of philanthropic initiatives in Kansas City. While at Hallmark, Bob was not only an ambassador and advisor to the community, but a valuable voice for the human and creative elements in the company's growth.
In Kansas City and Lawrence, much is known about Bob Kipp's contributions to the community, which are wide ranging and too numerous to detail. Organizations and institutions like the Kansas City Community Foundation, the KC Civil Council, the University of Kansas, the Kansas City Symphony, the Greater Kansas City Chamber of Commerce, the International City Management Association, the Midwest Research Institute and several more enjoyed Bob's active participation.
Bob Kipp's professional life carried with it public obligations, which he met with an understated demeanor, earning a reputation for humility, approachability, engaged listening and a quietly collaborative style. He served as a sound counselor to many But Bob's successful public contributions may ultimately not have been as impactful as his life outside that realm. Being part of Bob Kipp's private universe was an education in the richness of life. His enthusiasms were surprisingly eclectic: cooking, photography, poetry, unusual automobiles, popcorn, Monty Python, the University of Kansas, children's stories, audio equipment, fried chicken (with white gravy,) strange wristwatches, obscure books and movies, Chiefs football, Colorado mountain life and Costco. Interesting, imaginative people fascinated him. And, of course, there was music.
Always a musical classicist, from his early days in Nebraska with his arts-loving grandparents, his taste also comprised the post-war folk movement, opera and a diverse interest in classical and modern composers and artists. This deep interest led Bob to his extensive involvement with the Kansas City Symphony and the Curtis Institute of Music in Philadelphia. He loved listening to music, understanding it, appreciating musicianship, and sharing his passion for music for anyone who showed an interest.
Bob Kipp was a man for all seasons and to, the very end of his life, met and exceeded what Saul Bellow called the terms of one's contract. The one, in our inmost heart, that we all know. Donations in memory of our father can be made to the Kansas City Symphony https://www.kcsymphony.org/support-us/individual-giving/ Requiescat in Pace, Robert Almy Kipp.