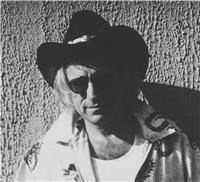 BORN
1945
DIED
2020
October 31, 1945 - May 11, 2020 John "Moon" Martin, a singer and songwriter of immense skill passed away of natural causes in Encino, California on May 11, 2020. Born in Altus, Oklahoma in 1945 he attended the University of Oklahoma and later moved to Los Angeles with his band The Disciples which then became Southwind and had immediate success playing with Hall of Fame artists Jimi Hendrix, Janis Joplin and Credence Clearwater Revival. He was later featured on guitars and vocals with rock legends Linda Ronstadt, Del Shannon, Glenn Frey, Don Henley and Michelle Phillips among others, while also gaining recognition both in the United States and France as a solo artist and composer.
He wrote the songs Bad Case of Loving You (Doctor Doctor) made famous by Robert Palmer and Cadillac Walk recorded by Willy DeVille. He also recorded many solo albums including Shots From A Cold Nightmare, Escape From Domination which featured the Top 30 hit Rolene and Street Fever which featured the hit Bad News which reached the Top 10 in France. The nickname Moon was hung on him by friends years ago because many of his songs had the word moon in the lyrics. He is survived by a brother Howard Martin, a sister Mary Sue Martin, two nieces and a legion of rock fans, musicians and artists who will miss his kindness and generosity but will enjoy his musical legacy forever.
A memorial service is planned at a later date.
Published by Los Angeles Times on May 24, 2020.
To plant trees in memory, please visit the Sympathy Store.
MEMORIAL EVENTS
To offer your sympathy during this difficult time, you can now have memorial trees planted in a National Forest in memory of your loved one.
MAKE A DONATION
MEMORIES & CONDOLENCES
5 Entries
I bought Shots at age 14 and I never missed his albums, maybe I'm the only one Italian Fan but his music never die!
Ciao Moon
Cicci
Cicci Serra
April 17, 2021
Always one of my favorite artists. I started listening to Moon’s music in 1977. I saw him live once in Houston, Texas at the Agora Ballroom along with Nick Lowe and Dave Edmunds. He and his music are missed!
Benji Rodgers
Acquaintance
February 20, 2021
Always enjoyed his melodic and powerful songs , first heard him in my early twenties. At the time I was one of the very few in Germany who knew of him, which made me feel special - because Moon was too.
Glenn Brigaldino
January 15, 2021
He was a prince of a man! Bright, funny, a deep thinker, straight shooter, loyal friend. Assiduous worker with a serious interest in economics.
Dougie Messenger
Friend
October 19, 2020
I grew up with Johnny Martin in Altus. I was a year behind in school, but we all had friends across grades, and ages. I remember going to his house, and he had just gotten a new guitar. He was so excited. It was the beginning none of us could see coming. I went to prom with him when I was a freshman, and he was a sophomore. After he graduated, he immediately packed up, and started his journey in music. Most of us also left on our own journeys, leaving Altus. I was very proud of him for following his dreams. Rest in Peace.
Julie Rooker Klie
Acquaintance
June 12, 2020
Showing 1 - 5 of 5 results