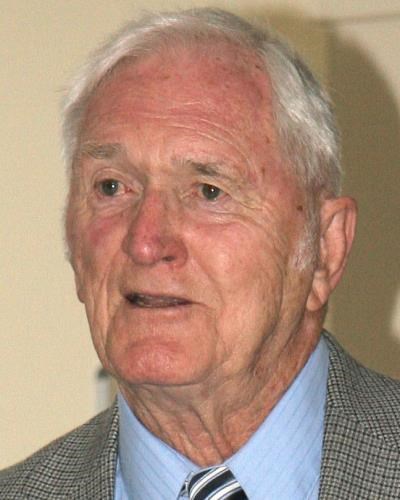 December 26, 1922 - September 21, 2018 American botanist, horticulturist, author, explorer, and director of the Huntington Botanical Gardens, Myron was a specialist in succulents, palms, and epiphytic cacti, and one of the world's leading authorities on echeverias.  Having no academic education in botany, Myron was a voracious reader and an avid collector of succulents (owning his first succulent at eight). He began to publish and translate articles on succulents in the late 1940s for the Cactus & Succulent Society of America. He was assistant manager of the UC Botanic Gardens at Berkeley from 1951 to 1962, became a founding member of the International Succulent Institute in 1958 (now managed by the Huntington), and director of the Huntington Botanical Gardens in 1962, a position he held for 25 years. During his tenure at the Huntington, Myron oversaw development of the Jungle, Subtropical, and Australian Gardens, creation of the Zen Garden and Bonsai Court, re-design and installation of both the Herb and Shakespeare Gardens, and construction of the Desert Garden Conservatory. Myron also guided creation of the Gardens' Herbarium, the Succulent Symposium, and the Gardens' docent program, as well as initiated the Huntington's plant-hunting expeditions, through which dozens of new species were introduced into cultivation from such countries as Mexico, Venezuela, Costa Rica, Peru, Bolivia, Namibia, South Africa, and others, and made available in this country for research and horticulture. Myron retired from the Huntington in 1987 but his research and writing in botany and horticulture continued up through his final years. During his lifetime he published over 100 scientific papers, many describing new species or revising existing genera. In 2010, he was presented the prestigious Cactus d'Or award for his contributions to the field. In 2011, he was awarded The CSSA Myron Kimnach Award for Lifetime Achievement, and in 2017, a new genus, Kimnachia, was named in his honor. On November 3rd, the Huntington will be honoring Myron in a private ceremony. His ashes will be spread at sea by his family.
Published by Los Angeles Times from Oct. 13 to Oct. 14, 2018.
To plant trees in memory, please visit the Sympathy Store.
MEMORIAL EVENTS
To offer your sympathy during this difficult time, you can now have memorial trees planted in a National Forest in memory of your loved one.
MAKE A DONATION
MEMORIES & CONDOLENCES
2 Entries
May Almighty God and his son Jesus Christ bless you and your family in this time of sorrow. John 17:3
October 14, 2018
My condolences to the family on the loss of your loved one. May the God of all comfort be with you during your time of sorrow. (Psalm 145:19)
October 13, 2018
Showing 1 - 2 of 2 results