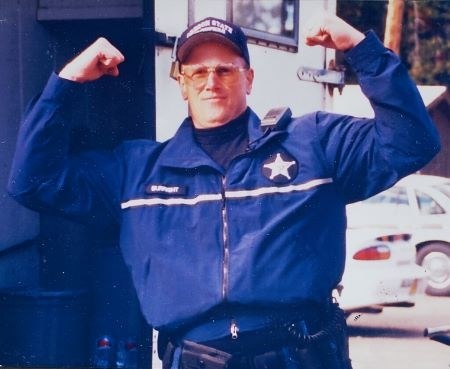 John Richard Burright passed away May 4th, 2021, at the Mennonite Home in Albany, Oregon. His stay at the Home lasted nearly twenty years, the result of disabling injuries sustained in 2001 while on duty with the Oregon State Police.

John was born October 28th, 1959 in Corvallis, Oregon to Kenneth and Helen Burright. He graduated from Crescent Valley High School in 1978 and attended Oregon State University before following in the footsteps of his father Ken and brother Dave, pursuing a career in law enforcement. In the summer of 1983 he worked with the Benton County Sheriff as a reserve deputy and other security services, before being hired as an Oregon State Trooper. After completing police training he was first stationed in Roseburg, followed by Albany and finally in Salem as a sergeant.

John absolutely loved life and lived it to its fullest as a consummate athlete and outdoor enthusiast. He excelled in high school and community sports and also loved camping and fishing. In 1984 he married Rhonda Olson and they had 3 sons, Kyle, Jeremy, and Nolan. John cherished his family and enjoyed spending time playing with his sons and teaching them all the skills they would need to become athletes, outdoorsmen, and wonderful human beings, like their dad.

Those who have known John well have such fond memories of his love of and devotion to his family, his great sense of humor, and the kindness he showed everyone he met. His fellow athletes remember his amazing skills, coordination, his speed and strength in whatever he was playing, and always preferred to be on the same team and not an opponent. His athleticism, work ethic, and commitment to excellence also propelled him in the law enforcement career he loved so much.

John's desire to help others made him an excellent trooper for the Oregon State Police and he was a part of some great teams. John was one of Oregon's first DRE (Drug Recognitions Expert) students and then was certified as one of the first instructors in 1995, and was invited to teach at the second DRE School session. He was also a valuable leader of the MRT (Mobile Response Team).

He is preceded by his father Kenneth Burright.

The family would like to extend special, heartfelt thanks to the amazing staff of the Albany Mennonite Home for their compassionate care and love for John over the last almost 20 years. John's family cannot express their love and appreciation for every single one of you who have touched their lives.

A memorial for John will be conducted at a later date in the summer or early fall, as Covid restrictions loosen.

In lieu of flowers, those wishing to contribute in John's memory are encouraged to make a donation to one of the following, or one that speaks to your heart:

Published by Lebanon Express on May 29, 2021.
To plant trees in memory, please visit the Sympathy Store.
MEMORIAL EVENTS
To offer your sympathy during this difficult time, you can now have memorial trees planted in a National Forest in memory of your loved one.
MAKE A DONATION
MEMORIES & CONDOLENCES
4 Entries
I am so sorry for your loss. I didn´t know John, butI was touched by his story. My son is currently at the academy to become an OSP Trooper ~ I follow their website and pray over ALL the troopers. Blessings and prayers to your family.
Cynthia Lang
Other
August 11, 2021
He and his beautiful family were an inspiration and lesson in courage. His and Rhonda's strength were unparalleled. The phrase "Warrior Angel" comes to mind...God's peace to the family.
Bonniw Borter LPN
Other
June 7, 2021
I worked with John when he joined our team of troopers at Oregon State University football games. He was professional and respected everyone. Always smiling as he walked into our squad room. Happy to support our troopers, helping anyway he could. A true Trooper and gentleman in every sense.
Jacqueline Allen
Work
June 6, 2021
Rhonda, Kyle, Jeremy, Nolan... John was one of the first men I met when I moved here in the late 90's. A couple of our boys were on the same football team and we would show up at their practices. The one thing that impressed me, right off the bat, was his love for you all. I sincerely pray that God will surround all of you with His love and comfort. Thank God for the memories. I love you all!!!
John Kollaer
May 29, 2021
Showing 1 - 4 of 4 results