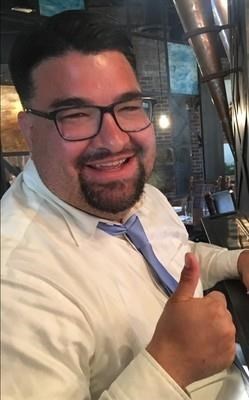 Louisville - Danny Alvarez was born on March 27, 1975, in Queens New York. He returned to the Lord on May 23, 2018. He is survived by his wife, Therese, and his three children Gabriela, Benedict, and Isabela, along with his parents Maria and Ernesto Alvarez, his brother and sister, David and Susan, 5 nieces and nephews and close friends throughout the community.

Danny was a true treasure to our entire community. As a lawyer he was passionate about giving a strong voice to immigrants. He won numerous awards for his advocacy and for his work in standing up for justice.

Danny dedicated his life and career to public service. He began his legal career as a public defender protecting the rights of the indigent. Danny opened his private practice in 2003, in order to expand his advocacy to include helping immigrants, defending the accused, and assisting people from all walks of life in their time of need. Danny was a leader in the legal community, recognized for his talent, integrity, ethics, and pro bono service.

Danny was honored that on May 22nd, the citizens of this community voted overwhelmingly for him to serve as the first Latino Judge in Kentucky. Danny spent his last day with friends and family, feeling joyful about his historic win. He would want the community to know how grateful he was for their support.

Published by Courier-Journal on May 27, 2018.
To plant trees in memory, please visit the Sympathy Store.
MEMORIAL EVENTS
May
28
Visitation
2:00p.m. - 5:00p.m.
St. Joseph Catholic Church
1406 E. Washington Street, Louisville, KY
May
29
Visitation
3:00p.m. - 8:00p.m.
St. Joseph Catholic Church,
1406 E. Washington Street, Louisville, KY
May
30
Funeral service
9:30a.m.
St. Joseph Catholic Church,
1406 E. Washington Street,, Louisville, KY
Funeral services provided by:
Ratterman Funeral Home - St. Matthews
MAKE A DONATION
MEMORIES & CONDOLENCES
Sponsored by The Courier-Journal.
26 Entries
We have great memories / god keep him in the glory
Oscar Gaitan / Bertha Gaitan
Friend
August 29, 2021
I still think of you now and then and sending good thoughts in heaven my friend!
Greta Payne
Acquaintance
May 19, 2021
I will never forget you Danny you meant so much to our family and we truly miss you. You will go down as one of the best people to ever grace this state. Rest in Peace.
August 27, 2018
We knew Danny as a very sweet child in Queens, New York. We are very sorry to know about his passing. Our deepest sympathy to the Alvarez Family. The Tellos
German & Margarita Tello
June 16, 2018
So very, very sorry. I had the pleasure of working with Danny when, as a law student, he clerked for my former firm. Danny was a skilled and caring advocate, he will be missed.
Lynn Watson
June 1, 2018
May God bless you and your family in this time of sorrow.
Former co-worker....LMPD
Lisa Malone
Coworker
May 30, 2018
I am so sorry to hear of this. I recently (about 8 mo.) got to meet Mr. Alvarez as my husband's lawyer. But in the short time of knowing him,i know he was a very kind, caring, wonderful person. We need more people like Danny Alvarez in the world today. It was an honor to be able to meet and talk to such a wonderful person. R.I.P. Mr.Alvarez, i know you are greatly missed.
Shannon & James Bonds
May 30, 2018
A good man, an outstanding lawyer and a family man who loved his wife and children. May God comfort Danny's family and may they know he will be missed.
Thomas Wine
May 29, 2018
Danny- our son thought the world of you! Your family will stay in our Prayers. We will miss your joyful personality and your genuine demeanor. You are most definitely loved, Danny.
Phyllis and Bernie Hurst
Friend
May 29, 2018
Oh Danny- you were such a joy to be around. I will keep your family in my prayers. I pray for Peace to come for them.
Carrie Hurst
Friend
May 29, 2018
Linda Wood
May 29, 2018
Mi más sentido pésame a la familia durante su tiempo de dolor. Que el amor compasivo de Dios los consuele y ayude a través de este difícil momento. Le invito a leer esta maravillosa esperanza que se encuentra en Salmos 119: 50 y 76.
Ester
May 29, 2018
Rest In Peace my dear Friend. Till we see each other again ..
Jodie Murphy-Flood
May 28, 2018
With deep felt sympathy. John Murphy and Theresa Forgeron
May 28, 2018
Danny,

You fought the good fight. My daughter, Jennifer, would have been so proud of you, and I am, too. May you Rest In Peace, and in time, may your family find peace.

Jean Grawemeyer
Jean Grawemeyer
Friend
May 27, 2018
The death of a loved one leaves a hole that only God can close, however the cherished memories we have of them can last a lifetime.
Hosea 13:14
Tc Aikens
May 27, 2018
Dearest,Therese and family I hold you in heart and prayer there are no words to ease this pain
sr. Phyllis O'Donnell
Family
May 27, 2018
I meet him, and he asked me could he take a picture with me I said yes and I told him that we need him and I was going to Vote for him I did, that night I could not believe it, I began Praying for his Family. Now he is with his Heavenly Family and Jesus. Where the Streets are need of Gold.
Norma Taylor
May 27, 2018
Norma Taylor
May 27, 2018
What an exemplary life Danny led which makes his loss that much greater . My heartfelt and sincere condolences to Therese and family and to Danny's parents and siblings . God bless and love you all .
Mary O'Neill
May 27, 2018
My condolences to the family. He was a very good man. A loss to the community as well.
Greta Payne
May 27, 2018
So sad, what a wonderful person.God will certainly reward him for all his good work. My love & sympathy to you Therese, & all the family.
Mary B. MacAskill
May 27, 2018
One Is hardpressed to find words of wisdom at such times as these. Just know that we love you & send our heartfelt condolences & prayers to you & your precious family. Love, Bedouin & Randall, Charlene & Tom, & Zach
Bedouin Dennison
May 27, 2018
Rest in Heaven my friend, you will forever be loved by us all, Azell Jackson
May 27, 2018
My sincere condolences to the family. May God give you the strength
& comfort you need during this time of sadness (Isa 61:1, 2).

Becky
May 26, 2018
Grief can be so hard, but our special memories help us cope. Remembering you and your loved one today and always. The children have lost a father, Therese a husband and Francis, a son in law- but heaven gained an angel!
Rosemary swirla
Acquaintance
May 26, 2018
Showing 1 - 26 of 26 results