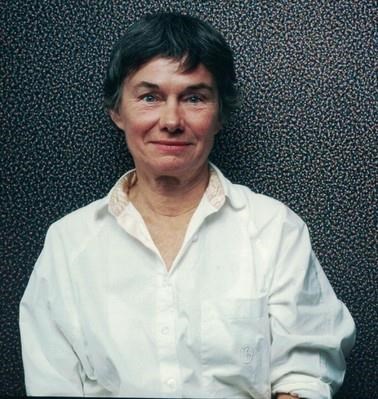 She grew up outside of Chicago in Evanston and Winnetka. Earned her B. S. in 1948 at Columbia University in New York City; in 1950 attended the Chicago Institute of Design; and in 1952 is believed to have been the first woman to earn her MA from the University of Louisville. She went to Venice, Italy on a Fulbright Scholarship from 1952 to 1953 and then returned to New York City to become a member of one of the groundbreaking artist-run cooperatives, the Tanager Gallery on East 10th Street. She earned a Guggenheim Fellowship to Lacoste, France in 1967-68. She was fascinated by the "calmness" explored by the Buddhist faith that some say was reflected in her paintings. However, she never would admit to it. Learn more at http://oldstonepress.com/library/iconoclastic-fervor/

She is predeceased by her father and mother, Frances and Craig P. Hazelet of Louisville, her sister Mrs. John H. Clark, III (Suzanne), and husband F. Weichel "Wick" Drummond. She is survived by her son, Craig P. Drummond of Catskill, NY and niece Craig W. Clark, nephew John H. Clark IV of Louisville, nephew Philip W. Clark of Albuquerque, NM and (21) great and grand-nieces and nephews.

A memorial and celebration of her life will be announced later this year. Expressions of sympathy can be made in the form of a donation to Louisville Visual Art, the Speed Art Museum or International Campaign for Tibet, 1825 Jefferson Place NW, Washington D.C. 20036.


Published by Courier-Journal on Apr. 16, 2017.
To plant trees in memory, please visit the Sympathy Store.
MEMORIAL EVENTS
To offer your sympathy during this difficult time, you can now have memorial trees planted in a National Forest in memory of your loved one.
MAKE A DONATION
MEMORIES & CONDOLENCES
Sponsored by The Courier-Journal.
1 Entry
John and family,
What a remarkable woman your aunt is and will always be. I know she will have a fitting celebration of life. My thoughts are with you. Marti
marti Kuehn
April 20, 2017
Showing 1 - 1 of 1 results