Brittany Helton
BRITTANY HELTON Brittany Rebecca Helton, 19, a student, of Muncy, Pa., passed away Aug. 4, 2010. She was born July 3, 1991, in Las Vegas. Brittany graduated from Muncy H.S. in 2009, where she was on the National Honor Roll and a member of the Key Club. She attended Lycoming College, where she was on the Dean's List. She was a loving sister, daughter, granddaughter and friend. Brittany is survived by her mother and stepfather, Stacey L. Ackermann and Troy A. Ackermann, both of Las Vegas; sister and brother-in-law, Ashley and Jeff Lamb of Twentynine Palms, Calif.; sisters, Sheridan and Tristann Ackermann of Las Vegas; and grandparents, Mike and Sue White of Las Vegas. Funeral services were held in Montoursville, Pa., at Spitler Funeral Home.

Published by Las Vegas Review-Journal from Aug. 16 to Aug. 17, 2010.
To plant trees in memory, please visit the Sympathy Store.
MEMORIAL EVENTS
To offer your sympathy during this difficult time, you can now have memorial trees planted in a National Forest in memory of your loved one.
MAKE A DONATION
MEMORIES & CONDOLENCES
12 Entries

Stacey,
I just wanted to write and say you are thought of with love today and that you are not alone. Hold on dear sister, hold on. Peace to you, Tina~
January 3, 2011

I want to say I am so sorry for all of the pain in your hearts of losing your Beautiful Brittany.It is the most difficult and devastating pain and challenge we will ever face & know, as Mom's & Family. Brittany is such a beautiful girl and I love her smile. My heart, love and prayers are with you all.
On Oct 23rd 2008, I too lost my oldest Beautiful Boy Nicholas James Devine (25). That was the day my life changed forever, and the day it seemed like my life had ended too. It has been just a little over two years now, and I have hope of making it today, and I don't feel like I am dieing of a painful slow death anymore. I have faith that my son Nicholas IS SAFE in the loving arms of our heavenly Father, and I believe with all my heart Brittany is there too. I have found peace in knowing I will see him when "The Chain Will Link Again".I pray you too can find that peace Stacey. Today I can rejoice and celebrate Nick's LIFE all 25 years of it.Today I have a Thankful heart for Knowing and Loving such a beautiful human being. I am honored to call Nicholas my son, and thank God for allowing me the pleasure of being his Momma. I wish for you Peaceful days and Gentle nights.I know how proud you are to be Brittany's moma too. May you always know you are not alone as long as there is another parent who has also experienced our sorrow.Sadly, we know there is, but gratefully we do not walk alone, Amen.Stacey, try to remember H.A.L.T. Not to get too Hungry, Angry, Lonely or Tired. Please try to take care of yourself, you are loved.
Blessings Tina~(pos)
Tina (pos)
December 29, 2010
I am so sorry for the loss of your beautiful daughter! I am walking this road with you! Anita mom of Brian
Anita Barrow
December 14, 2010
A loved one never leaves you,
They're never far away
They watch you from a distance and guide you every day
To Stacey with love and strength to you and your beautiful Brittany
Lee in NZ
December 12, 2010
You and your sisters are my shining light! I love all of you so very much and miss you more than you will ever know! When I see you, I am never going to let you go!
Mommy
August 26, 2010
TO MY BABY COUSIN BRIT!!
A thousand times we needed you
A thousand times we cried
If love alone could have saved you
you never would have died
......A heart of gold stopped beating
two twinkling eyes closed to rest
God broke our hearts to prove he only took the best
never a day goes by that you’re not in my heart and my soul.
christina foulkrod
August 25, 2010
Brittany though I didnt know you as well as most, I thought you were a beautiful person, both inside and out... Always with that bright smile, that could put the sun to shame.... You are greatly missed...
Laura C
August 25, 2010
Love you Brit. You were an exceptional young woman who touched the lives of so many people in so many ways. I miss you so much and wish I had kept in touch with you more. I am very proud of the woman you came to be...even in death you are helping others. Karl is right you will live on in our hearts forever. You will live on in those who received your organs. Love you sweet girl.
Grandma Sue
August 17, 2010
Stacey, Ashley and Grandma Sue; while I never met Brittany I already know that she was a beautiful and special person who touched so many lives in a positive way. I know you miss her deeply but always remember that Brittany will live on in your hearts forever.
Karl Fusco
August 17, 2010 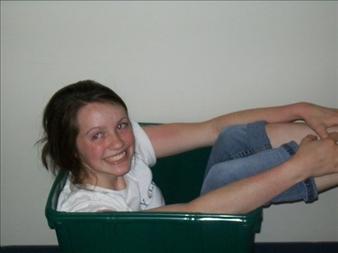 August 17, 2010
I love you my sweet Brittany. I miss you so much and will always keep you in my heart and in my thoughts. Not a day will pass that I do not think about your beautiful freckle face.
Mommy
August 17, 2010
To my friend Stacey and her dear family, I send you my deepest condolences. I know how hard it is to loose a family member, but couldn't imagine your pain of loosing a child. This wasa very classy, well written obituary. Brittany truly is a special Angel in heaven.... God bless you and your family! Lots of love....The McLaurin family
Michelle McLaurin
August 17, 2010
Showing 1 - 12 of 12 results