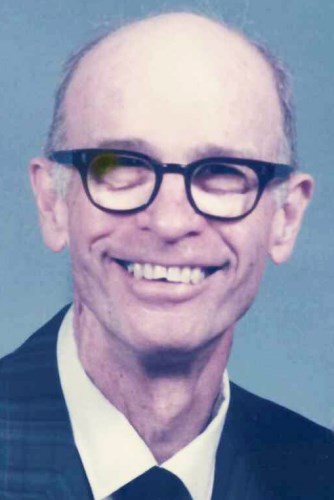 Clarence served in the infantry during World War II and was awarded the Purple Heart. After being honorably discharged from the U.S. Army in September 1945, he joined the American Legion and became a life member of the VFW.

Clarence married Bernadette Durben at St. Mary's Catholic Church in Stockbridge, Wis., on Aug. 7, 1948. He received a B.S. from Oshkosh State Teacher's College in 1949, with a double major in math and physics. That fall Clarence and Bernadette moved to Reedsburg, Wis., where he spent his entire career teaching math and science at the high school. In 1957 Clarence was awarded a Master of Science in teaching from the University of Wisconsin-Madison.

Clarence was preceded in death by his son, Gerard Bittner of Reedsburg, Wis.; his sister, Dorothy (Frederick) Schnell of Kiel, Wis.; and his brother, Harold, who died as an infant.

The family would like to say a special thank you to all the people who provided loving care for Clarence and Bernadette while they lived in their Mack Drive condo and at the Senior Life Care Center in Reedsburg.

A Mass of Christian Burial will be held at 11 a.m. on Monday, June 28 at SACRED HEART CATHOLIC CHURCH, 624 N. Willow St., Reedsburg, with Father Patrick Wendler officiating. Visitation will begin at 10 a.m. at the church. Face masks and social distancing will be required. Interment will follow with military honors in Calvary Cemetery. In lieu of flowers, the family asks that donations be made to the St. Vincent de Paul Society.

The Hoof Funeral Home in Reedsburg is assisting the family with the arrangements.

Published by Madison.com on Jun. 23, 2021.
To plant trees in memory, please visit the Sympathy Store.
MEMORIAL EVENTS
Jun
28
Visitation
10:00a.m. - 11:00a.m.
Sacred Heart Catholic Church
624 N Willow St,, Reedsburg, WI
Jun
28
Mass of Christian Burial
11:00a.m.
Sacred Heart Catholic Church
624 N Willow St,, Reedsburg, WI
Funeral services provided by:
HOOF FUNERAL HOME - Reedsburg
MAKE A DONATION
MEMORIES & CONDOLENCES
Sponsored by HOOF FUNERAL HOME - Reedsburg.
1 Entry
I am sorry for your loss. I just wanted you to know what your loved one meant to me. Mr. Butter took the extra time to help me to understand math and physics. I did not find out I had ADHD and dsylexia until I was a sophomore in college!!! I credit him and Mr. Sivan, chemistry, for teaching my how to learn and adapt. I did not do great in college but I received my degree in architecture. I later was also a successful mechanical designer. If it would not the kindness and dedication of your loved one, I don't know what would have happened to me. God bless him and you all! Peace!
Mary Lynn Reed Cleary
June 23, 2021
Showing 1 - 1 of 1 results