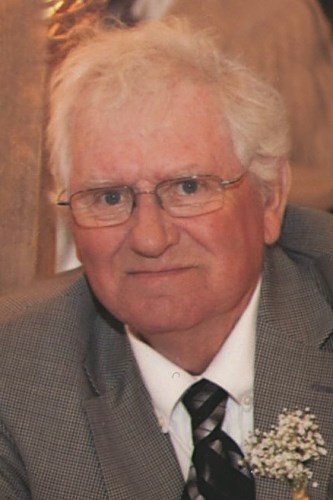 MAZOMANIE - Earl Lavern Duhr, age 79, passed away at Sauk Prairie Hospital on Dec. 23, 2020. He was born in Union Center, Wis., on June 14, 1941, to the late Harold and Tacy Bell (Johnson) Duhr. Earl graduated from Mazomanie High School in 1959. Following high school, he enlisted in the U.S. Navy and was stationed in Norfolk, Va. Earl was united in marriage to Dianne Theis at St. Martin's Catholic Church in Martinsville on Oct. 7, 1961. Together they had four boys. Earl worked for over 30 years at the University of Wisconsin as an animal caretaker. He was an avid sports spectator for the Brewers, Badgers and Packers, and cheered on family and friends in their sports activities, including watching his great-nephews, Chris and Kyle Reeve, wrestle. He loved the outdoors, enjoyed hunting, fishing and playing cards, and relished trips spent up north at Pike Lake with his sons. He was happiest when spending time with his family, and these are the moments he cherished most. He was a loving husband and father, and his grandchildren held a special place in his heart.

He is survived by his wife, Dianne; his sons, Tim (Janeen) and their children, Karissa and Zach, Joe (Sue) and their daughters, Nicole (Joel) Alexander and Katie (Johnny) Orsucci, Michael (Lynda) and their daughter, Lauren, and Jesse (Theresa) and their children, Jameson (Vanessa) and Kaitlyn (Nicholas) Genthe; three great-grandchildren, Earl "E.J." Alexander, Maddie and Jackson Orsucci; a fourth great-grandchild due in May; his brother, Rudy; half-siblings, Mike (Michelle) Duhr and Kenny Duhr; and stepmother, Judy Duhr.

In addition to his parents, he was preceded in death by three sisters, Loraine (Edward) Theis, Shirley (Wayne) Garfoot and Velma (Billy) Ketelboeter; and sister-in-law, Sue Duhr.

A private family service will be held; interment will be in the St. Barnabas Cemetery.

Online condolences may be made at hooversonfuneralhomes.com.

To plant trees in memory, please visit our Sympathy Store.
Published by Madison.com on Dec. 27, 2020.
MEMORIAL EVENTS
No memorial events are currently scheduled.
To offer your sympathy during this difficult time, you can now have memorial trees planted in a National Forest in memory of your loved one.
GUEST BOOK
0 Entries
Be the first to post a memory or condolences.