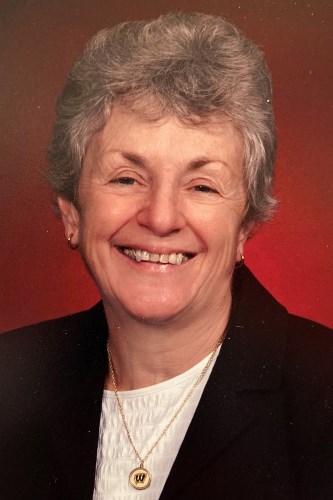 MADISON - Kit Saunders Nordeen, who pioneered women's athletics at the University of Wisconsin in the 1960s and '70s, and as a top national administrator fought for equal opportunities for women athletes in the tumultuous years following the passage of Title IX, died Jan. 1, 2021, at Oakwood Village University Woods in Madison. She was 80 and had battled Alzheimer's for several years.

Kit was named UW-Madison's first director of intercollegiate athletics for women in 1974. Five years later, while continuing her UW role, Kit was elected Division I vice-president of the Association of Intercollegiate Athletics for Women (AIAW), then the preeminent governing body of women's intercollegiate athletics. Across decades, she won numerous awards for her efforts, forged enduring friendships with other women's athletics leaders across the country, and inspired student athletes, both female and male. She retired in 1990 as Associate Athletic Director.

Kit was born and raised in Teaneck, N.J., daughter of Alfred and Katherine (Krall) Saunders. She loved sports and the outdoors from an early age. She returned to Teaneck to teach and coach there after graduating from Trenton State College. Camp Navarac colleagues (where Kit taught water-skiing in the summers) suggested she head west to University of Wisconsin-Madison. She arrived in 1964 to study for a master's degree (and Ph.D. in 1977) while working as a teaching assistant in physical education. Kit coordinated the Women's Recreation Association – the sports program for women on the UW-Madison campus – and grew it from intramural to extramural, with competition against other schools in 11 sports. Kit worked with a quiet tenacity to see that the 1972 passage of the Title IX law, which effectively required universities to provide equal opportunity and resources for men's and women's athletics, was applied to UW athletics. For the next 16 years, with the help of valued colleagues like Paula Bonner and Tamara Flarup, Kit developed and grew a successful program while playing a role nationally in the advancement of women's intercollegiate athletics.

There were numerous highlights, but Kit would always remember standing in the snow at Penn State as the Badger women won their first NCAA championship, a cross-country title in November 1984. Another favorite memory, from November 1990, just after her retirement, was sitting with Flarup in the upper balcony with tears in their eyes as a crowd of nearly 11,000 fans streamed into the Fieldhouse to watch women's volleyball. In 1998, Kit tossed the ball for the first women's basketball game that was held in the Kohl Center.

Part of her decision to retire in 1990 was the result of a meeting on a tennis court in spring 1987. Mutual friends partnered her with Dale "Buzz" Nordeen, a Madison banking executive, and before long they were inseparable. Buzz and Kit were married on April 9, 1988. Their loving union of three decades – Buzz died in July 2019 – was actively filled with travel, golf, skiing, dogs, grandchildren, a shared joy in their hobby farm, and attendance at innumerable University of Wisconsin athletic events. Kit enjoyed rotary meetings and continued to serve on numerous committees including the Arboretum, University Ridge Golf course, and athletic hall of fame. She embraced the role of "Grandma Kit" by instructing kids in tennis and canoeing at Woodland lodge and attending Grandparents University together at UW.

Kit is survived by her brother, Don Saunders (Diana Dunn); his son, Brett Weise Saunders; stepchildren, Kathy (Bill) Snyder and children, Sara (Ollie) Tetlow, Blair (John) Simonetti and Sondra (Paul) Koes, Christopher (Liza Robles) Nordeen and children, Davis and Max, and their mother, Susan, and Andrew (Joanne) Nordeen and children, Ross, Natalie and Haley; great-grandchildren, Cora, Charlie, Bella, Sophia, John, and Henry; in addition to many valued colleagues and friends. Treasured friends include Norma and John Magnuson, Sharon and Tom Pasic, Kathy Riss, and Ruth Bartlett. Thank you all who have visited Kit (especially with their dogs) and to the staff at Covenant Oaks "Badger Blvd" memory care and Hebron Oaks for their compassionate care of Kit.

A private family service will be held on Jan. 16, 2021. Details to view the recorded service will be provided online at www.cressfuneralservice.com, Sunday morning, Jan. 17, 2021. A celebration of life will be held at a future date - likely to coincide with release of Madison author Doug Moe's biography of Kit, which is nearing completion.

While her memory and capabilities declined as the Alzheimer's progressed, Kit continued living in the moment, enjoying her husband's visits every day and holding his hand. She kept smiling and seeing the good and potential in everyone she met.

And while much is rightly made of the struggle Kit and her colleagues had to gain equality for women's intercollegiate athletics, Kit would talk about the battles, the frustrations, the highs and lows. Then she would add: "Wasn't it fun?"

To plant trees in memory, please visit our Sympathy Store.
Published by Madison.com on Jan. 10, 2021.
MEMORIAL EVENTS
No memorial events are currently scheduled.
To offer your sympathy during this difficult time, you can now have memorial trees planted in a National Forest in memory of your loved one.
Funeral services provided by:
Cress Funeral & Cremation Service - Madison West
GUEST BOOK
Sponsored by Cress Funeral & Cremation Service - Madison West.
3 Entries
To Kit´s family I am sorry for your loss. I got to know Kit when my 65 yo wife was a resident at Oakwood memory care. Kit always had a smile and really lit up when Buzz came for his daily visits. Buzz and I were both members of the Alzheimer´s men´s support group. The love Buzz and Kit had for each other stood up to Alzheimer´s. Which is very difficult.
John Torrens
January 16, 2021
"Miss Saunders" was my favorite. She took personal interest in her students and took really good care of us. In the 70's we were very casual with our dress and with a guest speaker coming to our class she told us to "put a crease in our jeans."
Carol (Voss) Michalski
January 11, 2021
Offering our deepest condolences during this difficult time.
The Staff of Cress Funeral & Cremation Service
January 10, 2021