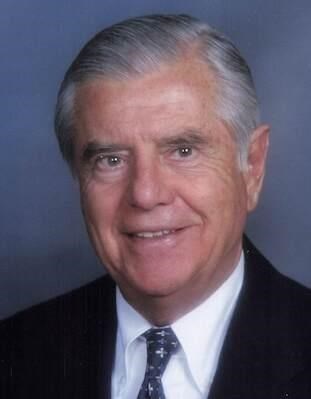 Mansfield - Renowned Mansfield entrepreneur and local icon of the skiing community, David Lawrence Carto passed away following an extended illness on Easter Sunday, April 4, 2021, surrounded by his loving and devoted family in his Mansfield home. He was 90.

David was born in Fort Wayne, Indiana, on August 5, 1930, second son to the late Willis F. and Louise A. Carto. His family moved to Mansfield, Ohio in 1942, which remained his hometown for the rest of his life. Upon graduation from Mansfield Senior High School in 1948, David attended Ohio Wesleyan University, where he was a member of the Sigma Alpha Epsilon fraternity. He graduated in 1952 with a bachelor's degree in business administration. Following graduation, he was employed by Westinghouse in Mansfield and was transferred for a short time to St. Louis. In April of 1954 he was drafted into the United States Army, where he served in the Counter-Intelligence Corps. On September 18, 1954, David married Frances Eleanor Draffan, and in 1956, while stationed in St. Paul, Minnesota, Dave and Frannie had their first son.

Upon his honorable discharge from the Army in 1956, David began his illustrious career in business and community service. He went to work in the advertising department for the Ohio Brass Company at their Mansfield headquarters, eventually becoming employment manager in the personnel division and assistant vice-president in the sales department. But it was his love for the sport of skiing, which he had acquired during his Army stints in Wisconsin and Minnesota, that became the catalyst for his true calling. Upon returning to Mansfield, he formed the Mansfield Ski Club, a group of friends who got together on weekends to ski on a hill in Knox County with a home-made rope tow. In August, 1961, he joined a group of Columbus investors with a plan to build the first commercial ski area in Ohio. The group bought a dairy farm in the Possum Run valley south of Mansfield, converted the bank barn into a ski lodge, installed four rope tows on the hill and created a snowmaking system. In December, 1961, Snow Trails opened to the public, at the time the first and only ski area operation relying entirely on man-made snow, as well as the southernmost ski area in the country. Today, Snow Trails Winter Resort is a bustling and thriving mecca for skiing, snowboarding and snow-tubing enthusiasts, not to mention a unique and popular venue for après ski food and beverages, musical entertainment, weddings and all sorts of public and private gatherings.

David's entrepreneurial spirit and business acumen carried Snow Trails through tough times in the early years. Disagreements among the early investors led to his appointment as the president of the company in its first year of operations. While handling the business of the ski area operations, David continued to work for Ohio Brass until 1964. After that he formed not-so-successful start-up enterprises in home security and pre-computer learning devices. All the while, through creative financing and personal risk, he led Snow Trails in continuous improvements and expansion. By 1970 he had acquired sole ownership of Ohio Ski Slopes, Inc., and Snow Trails was his full-time career. Today, Snow Trails is the only family-owned and operated ski resort remaining in Ohio. David's daughter, Amy Crislip, has managed the ski shop since 1982, while her husband, Scott, is the president and general manager of Snow Trails. Grandsons Dave Carto, Andy Crislip and Matt Crislip manage various departments of the ski area operations, while David's eldest son, Duffy Carto, oversees the junior alpine ski racing program.

David became well-known in the ski industry and was deeply involved in its growth in the United States. He founded the Ohio Conference of Ski Area Operators and was a director of the National Ski Area Association (NSAA) and the Midwest Ski Area Association. He was the recipient of the NSAA's Lifetime Achievement Award in 2008. He was instrumental in enacting ski area liability legislation and was a charter member of the Ohio Ski Tramway Board.

As if he was not busy enough running a ski area and raising a family of four children, David was heavily involved in service to the community and his country. He served two terms as president of the Mansfield/Richland Convention and Visitors Bureau, board chair of the Mansfield-Richland Chamber of Commerce (recipient of the 1997 Chairman's Award), chair of the Area Action Council of the National Federation of Independent Business, board president and trustee of the Ohio State University/Mansfield campus, president of the Kiwanis Club of Mansfield, board trustee and president of the Rehabilitation Service of North Central Ohio (named honorary lifetime trustee in 1999), board trustee and president of the Richland Carrousel Park, board trustee and chair of the Richland County Foundation, board trustee and treasurer of MedCentral Health System Foundation, trustee of the North Central State College Foundation (inducted into the Entrepreneurial Hall of Fame in 2011) and advisory board member of the Ashland University John Ashbrook Center for Public Affairs (named Emeritus Member in 2015). Dave was also an active and dedicated participant in local, state and federal politics, both as a member of the Richland County Republican Party Executive Committee and as a host of political fundraisers at all levels. Whether at his home on Ballylin Farm or at Snow Trails, David included among his guests such political luminaries as John Ashbrook, Dan Quayle, Ronald Reagan, George H. W. Bush, Phil Gramm, Mike Dewine and George Voinovich.

In addition to his business, charitable and political associations, David enjoyed the fellowship and faith of his church, First Congregational Church, and his many friends and colleagues at Westbrook Country Club, Hermit Club, Fifty-one Club and Our Club.

The Carto family will receive guests on Thursday, April 8, 2021 from 4 to 7 p.m. in the Finefrock Chapel of the Marion Avenue Snyder Funeral Home, 350 Marion Avenue. A service, giving glory to God for the life of David L. Carto, will be held Friday, April 9, 2021 at 11:00 a.m. in First Congregational Church, 640 Millsboro Road, with Pastor Bruce Haapalainen officiating. Burial with military honors will follow in Mansfield Memorial Park.

The family would like to express their heartfelt thanks to David's caregivers from Freedom Caregivers and to his hospice nurses from Southern Hospice Care, and in particular to Jackie, Michelle, Tashia and Liz. The family asks that memorial contributions in David's name be made to Catalyst Life Services, Richland County Foundation or the Ashbrook Center, and may be made at the funeral home.

Snyder Funeral Homes is honored to serve the Carto family. Share a message of support with them online at: SnyderFuneralHomes.com

Published by News Journal from Apr. 5 to Apr. 7, 2021.
To plant trees in memory, please visit the Sympathy Store.
MEMORIAL EVENTS
Apr
8
Visitation
4:00p.m. - 7:00p.m.
Snyder Funeral Homes, Finefrock Chapel
350 Marion Ave, Mansfield, OH
Apr
9
Service
11:00a.m.
First Congregational Church
640 Millsboro Road, OH
Funeral services provided by:
Snyder Funeral Homes, Finefrock Chapel
MAKE A DONATION
MEMORIES & CONDOLENCES
Sponsored by Snyder Funeral Homes, Finefrock Chapel.
8 Entries
It was a pleasure knowing David, He was a first class gentleman. Our deepest condolences to the Carto family. Cindy & Herb Chandler, Arlington, VA
Cindy & Herb Chandler
Acquaintance
April 14, 2021
Duffy - so sorry to hear of the passing of your Father. He was larger than life a such and such a presence in the community. Always enjoyed being around him and he was an inspirational figure in our community. His memory will last far beyond his years with us
Brian & Chris Bacin
Friend
April 9, 2021
One of the nicest guys I ever met.
STEPHEN M SHOUP
Coworker
April 9, 2021
May the love of friends and family carry you through your grief.
Jason and Amy Cooper
Coworker
April 8, 2021
Amy, Scott and family,
We did not personally know your father but can feel and see his legacy throughout Snowtrails and what an amazing legacy. You and your family are in our thoughts and prayers.
Aaron and Ashlie Doup
Acquaintance
April 7, 2021
So sorry to hear of the loss of your father.
Sue Glorioso
Friend
April 7, 2021
To the family of Dave Carto. I am so sorry for your loss. Your Dad, Grandfather, Great Grandfather dedicated so much of his life to this community and the people in it. He will be missed. My own son, Evan, has worked years at Snowtraiks and has nothing but the utmost respect for Mr. Carto and his family. May he Rest In Peace!
Mary Llewellyn
Acquaintance
April 7, 2021
Bob and are deeply saddened by your loss. We have fond memories of Snow Trails, Ballylin Farm and of course Dave's huge presence in the community. Please know that you are in our thoughts and prayers....Our heartfelt sympathy to the entire Carto family. May your memories be a blessing. Most sincerely, Bob and Kathy Mohl
Kathy Mohl
Friend
April 6, 2021
Showing 1 - 8 of 8 results