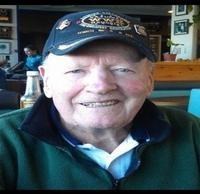 BORN
1922
DIED
2017
FUNERAL HOME
Benito & Azzaro Pacific Gardens Chapel
1050 Cayuga St
Santa Cruz, CA
Robert M. Pifferini, Sr.
Oct. 1, 1922 - Dec. 9, 2017
Resident of Capitola
Robert M. Pifferini, Sr. was born in Oakdale, California on October 1, 1922 to Joseph and Katie Pifferini. He died on December 9, 2017 at the age of 95. Bob spent his childhood in Modesto and excelled in athletics at Modesto High School and Modesto Junior College. After completing his degree as a three sport athlete at Modesto Junior College, Bob enlisted in the United States Army and served four years in the South Pacific in World War II. As a soldier, Bob received many commendations including the Asiatic Pacific Campaign Medal, the World War II Victory Medal, the Army of Occupation Medal, the Bronze Medal for the New Guinea Campaign and the Bronze Medal for the Luzon Campaign. As a soldier during WWII, Bob was a Technical Sergeant responsible for the coordination and control of 56 men in combat. After being honorably discharged, Bob attended San Jose State University and played football, basketball and baseball for the Spartans. At San Jose State, Bob, the team football captain, met and married his wife Gaynell Miller, the 1st Spartan Homecoming Queen. After San Jose State, Bob played in the NFL for the Detroit Lions and San Francisco 49ers. Prior to Bob's death, he was listed as the second oldest living Detroit Lion alumni and the sixteenth oldest living NFL alumni. Bob Pifferini, "Coach Piff" was an instructor and coach at Lodi High School for 7 years before becoming a long time tenured instructor and coach at Foothill College and DeAnza College for over 40 years; coaching football, baseball and golf. He was Foothill College's first Head Baseball Coach and DeAnza College's first Head Football Coach. His success as an athlete and coach led him into four "Hall of Fames" including the Modesto Junior College Hall of Fame as a player, the San Jose State Sports Hall of Fame as a player, the DeAnza Junior College Hall of Fame as a coach and the California Community College Hall of Fame as a player and coach. Bob and his wife Gaynell were active members at Grace Bible Church in Campbell, CA and Bob was an active member of SIRS. He was an avid golfer until he was 91 and he loved watching his children and grandchildren excel in sports, music and dance. Bob was preceded in death by his loving wife of 60 years Gaynell, parents Joseph and Katie, and sister's Hilda, May and Doris. He is survived by his sister Lili Rice, brother Ray Pifferini, son Bob Pifferini Jr., his wife Lark, son Jess Pifferini, daughter Trina Rettig, her husband Glenn, son Roc Pifferini, his wife Joanna, daughter RaeAnn Scheidt, her husband Rick and 9 grandchildren and 6 great grandchildren. The family would like to thank Imelda Zarate for her extraordinary care of Bob for many years. Bob deeply appreciated Imelda's loving care. In lieu of flowers, Bob would like people to make a donation to the Central Valley Honor Flight. Checks can be made out to the Central Valley Community Foundation (memo line: Central Valley Honor Flight). The address is Central Valley Community Foundation 5260 N. Palm Ave. #122, Fresno, CA. 93704. Donations can also be made online by going to cvhonorflight.org. A memorial service will be held at San Joaquin Valley National Cemetery at 11:30 am on Friday, January 5, 2018.

Published by San Jose Mercury News/San Mateo County Times on Dec. 17, 2017.
To plant trees in memory, please visit the Sympathy Store.
MEMORIAL EVENTS
Jan
5
Memorial service
11:30a.m.
San Joaquin Valley National Cemetery
CA
Funeral services provided by:
Benito & Azzaro Pacific Gardens Chapel
MAKE A DONATION
MEMORIES & CONDOLENCES
Sponsored by San Jose Mercury News.
15 Entries
I am sorry to hear about Coach Pifferini. He was such a great man and a wonderful role model to so many. Playing for him was some of the best years of my life. He will be missed.

Mike Bosco
Mike Bosco
February 22, 2018
I am sorry for the family's loss. Your dad had a way of making me feel as if I knew him forever and made me feel comfortable in his presence. My thoughts and prayers are with the family.
al cardwood
January 4, 2018
I am sorry to hear about Bob. I am a voice from the past and when I met him I was 17 and he was the star center at San Jose State. He was one of my heroes then and was so gracious to treat me like I was something and inspired me to have high goals and play football even though I was not a big person. He was an excellent football coach and a very good person. I always felt I was in the presence of a special person and he made us feel that way too.

My condolences to the Pifferini Family.

Chris Pappas.
Chris Pappas
January 3, 2018
I'm sorry to hear about Bob. When I met him I was 17 and he was the star center at San Jose State. He was one of my heroes then and was so gracious to treat me like I was something and inspired me to have high goals and play football even though I was not a big person. He was an excellent coach and a very good person. I always felt I was in the presence of a special person and he made us feel that way too.
My condolences to the Pifferini Family.
Chris Pappas
January 3, 2018
First off Coach Piff was an honest upfront man that told you how things rolled.

Had a dry humor to him that was unmatched. Top notch tough nosed Coach from the years past and will be missed.

Condolences to his family.

Leonard Marchese ,,, # 45
January 3, 2018
Condolences with much love and grace to the Pifferini family.
Gary Edmonds
January 2, 2018
Bob was a great man who had a keen sense of humor and incredible stories of his football years. He served as a marshal at Delaveaga Golf Course, where I work as a greens keeper.

He will be missed but not forgotten. My condolences and love to the family.
Jeffrey Lewis
December 23, 2017
Uncle Bob was an extraordinary man! He accomplished soooo much in his life. It was always fun to spend time with him and Auntie Gaynell at Brentwood Lake, Twain Harte lake, the cabins, in Los Altos and in Scotts Valley. We send our deepest condolences and love to the Pifferini family.
Duane Serrano
December 22, 2017
My deepest condolences to the Pifferini family in the loss of a great and accomplished husband, father, grandfather, and great-grandfather. I am truly impressed by what an honorable and dedicated life he lived.
May his legacy have lasting and cherished memories to his family, friends, and all those he impacted through the years.
Steve Mendoza
December 21, 2017
BOB was a fun and loving person to work with for many years. I feel so fortunate to have had him in my life. Our De Anza family will miss him.
My condolences to his lovely family.
Sylvia Hooks
December 21, 2017
On behalf of the entire Foothill-De Anza Community College District, I would like to extend our sincerest condolences to Bob's family. He was a beloved coach at both Foothill and De Anza and we will adjourn our Board of Trustees meeting on January 16, 2018 in his memory.

Judy C. Miner, Chancellor
Judy Miner
December 20, 2017
Bob was a great neighbor and friend. We will miss him. Our sincere condolences to Bob's Family. Rest in Peace Bob...
Dan & Carol Corless
December 18, 2017
Sending love and prayers to my friend RaeAnn Pifferini Scheidt and family...I only met your dad once...he was a real gentleman... Knowing how you loved and took care of him he was a blessed man. Love you...Ginger
Ginger D'Ambrosia
December 18, 2017
I knew Bob at San Jose State in the 40's and 50's. He was so very well-liked and admired by so many.
Jean Ellen Vallandigham
December 17, 2017
Coach Piff
December 17, 2017
Showing 1 - 15 of 15 results