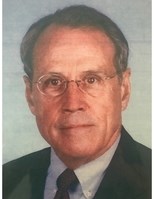 BORN
1939
DIED
2021
Paul D. Taylor
Paul D. Taylor, 82, died unexpectedly on July 18, 2021 at Linden Ponds Senior Living in Hingham, MA. Born in Warren's Corners, NY, Paul lived in Newport, RI with his wife, Dorcas Billings Taylor, for twenty three years. They moved to Massachusetts in 2017.
Paul had a distinguished career as a U.S. Foreign Service Officer. He held early diplomatic assignments in Quito, Ecuador; Bangkok, Thailand; São Paulo, Brazil; and Madrid, Spain. He served as Chargé d'Affaires in Guatemala in the early 1980s. From 1985 to 1988, he served as Deputy Assistant Secretary of State for Inter-American Affairs. On April 11, 1988, President Reagan nominated him to be the U.S. Ambassador to the Dominican Republic, where he served until January 1992. His final post in the Foreign Service was as State Department Advisor to the President of the Naval War College in Newport, RI from 1992 to 1994. He continued at the Naval War College, from which he retired as Professor Emeritus. Paul had an intense passion for Latin America and the Caribbean, and an abiding interest in US foreign policy. At the time of his death, he was enthusiastically writing a paper about newly released data on the actual peril facing the U.S. during the Cuban Missile Crisis. His academic achievements included a bachelor's from Princeton University, where as a member of the Whig-Cliosophic Society he helped to organize a 1959 visit by the new Cuban leader Fidel Castro. He earned a master's in public policy from Harvard University. Prior to joining the U.S. Foreign Service, Paul served as a lieutenant in the U.S. Navy.
Thanks to his experience in the Navy, Paul became an avid sailor. He also developed a penchant for fine woodworking and leaves behind numerous handmade wooden items, including dining room tables built for each of his three children and their spouses. In Newport, he was a member of the vestry and building committee of Trinity Church Newport, on the race committee at the Ida Lewis Yacht Club, and a member of many book groups over the years. At Linden Ponds, he participated actively in the Great Decisions Series and Lifelong Learning. Paul will be remembered for his consideration of others, inquisitive mind, jolly nature, and endless wit.
Survivors include his wife, Dorcas Taylor (née Billings); son, Jonathan Taylor and his wife Rev. Andrea Suess Taylor of South Dennis, MA; daughter, Katherine Taylor Haynes and her husband Anthony C. Haynes of Nashville, TN; and son Matthew Taylor and his wife Nácia Pupo Taylor of Kensington, MD; and grandchildren Capt. Noah Taylor and his wife Lt. Chantal Durgana, Jacob Taylor, Alexander Haynes, Teodoro Pupo Taylor, Christopher Haynes, and Benjamin Pupo Taylor.
In lieu of flowers, donations may be made to a charity of your choice in the name of Paul D. Taylor.
Published by Newport Daily News from Jul. 20 to Jul. 22, 2021.
To plant trees in memory, please visit the Sympathy Store.
MEMORIAL EVENTS
To offer your sympathy during this difficult time, you can now have memorial trees planted in a National Forest in memory of your loved one.
MAKE A DONATION
Please consider a donation as requested by the family.
MEMORIES & CONDOLENCES
4 Entries
Paul was a dear friend who always thought of others, whose kindness toward all shone through, and who had a wit to make one laugh at himself in a most kind way. His love of his wife and his family was prominent. The Weber family will always remember him.
Sandra Jean Weber
July 24, 2021
Our deepest sympathy to you, Dorcas, and your family. Our families were often together in Madrid, a post that our family hold with great affection, and knowing the Taylors was one reason for it. Cynthia and Vince
Cynthia and Vincent Chiarello
July 24, 2021
I was so saddened to hear of Paul's death. There are many fond memories of Paul and Dorcas' time in Newport at Trinity. He was a wonderful man with interests, skills and knowledge covering a wide range of topics. He will be sorely missed. I pray for God's comfort for his family during their grief.
Dennis Kretzschmar
Friend
July 22, 2021
So sorry to hear of the untimely death of your father, Jonathan. He sounded like a truly wonderful man with a very exciting career. My father was a graduate of Princeton, Harvard, and was also in the Navy. It makes me now feel closer to your family .It somehow lets me feel perhaps, a bit of your pain. May the Lord be with you in this sorrowful hour.
Barbara Rockefeller
July 21, 2021
Showing 1 - 4 of 4 results