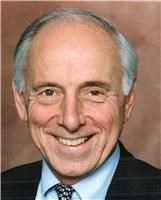 My deepest condolences go out to you and your family. I had the pleasure to be Joe’s secretary (as well as Suzanne Bell’s) from the start when TSI opened up its doors (over 20 years ago!) and stayed on for a few years before I moved out of state. I’ll never forget when I left the law firm with Suzanne to move to TSI, she said I would be also working for this really nice man and she filled me in on his background and I remember thinking Wow, I’m going to be really nervous meeting this man. Well once I met him I could not believe what a wonderful and kind man he was. Never made a person nervous at all. He was so easy going and so calm and never, ever raised his voice no matter how crazy the days could be. I remember giving him his travel schedule on his index cards that he always used and he would be in three different states in one day going to meetings and had so much energy and always a smile on his face. I’ll never forget we had a board meeting on Mirabella III (I think) and how beautiful she was!! I have on occasion over the past 20 years googled him and was always wondering how he was doing and wanted to see what his next project would be, so when I was watching a boating reality tv series show I love to watch, Below Deck, they were docking in Croatia and heard Captain Glen say the words “Mirabella V”, I let out a slight scream and explained to my daughter all about the person behind the Mirabella(s). Decided to Google him tonight and read about his passing. He will forever hold a special place in my heart. Sending prayers to you Luciana and to your family. ❤
Kindest Regards,
Petra Foster
Petra Foster
Coworker
April 6, 2021
My deepest condolences! I just watch the Mirabella documentary and was going to reach out to you to thank you for sharing her with us who love boats and can only dream to see how beautiful they are.You did a wonderful job! Thank you and RIP. Linda Corsi your Canadian friend
Linda Corsi
March 11, 2021
I grew up in Glen Cove and live in Glen Head. My wife's family are also originally from Glen Cove with Italian roots. I read of your loss in Scuttlebutt the sailing journal. Please accept my condolences for your loss. Our North Shore community has lost someone that we are proud of. Fair winds and following seas to Mr. Vittoria.
Cliff Welden
March 8, 2021
JOE WAS AN AMAZING HUMAN BEING...I WAS ONE OF THE LUCKY EMPLOYEE AT AVIS RENT A CAR WHEN JOE WAS THE CEO,AND RECEIVED THE BENEFIT OF ESOP......HE WAS GENEROUS AND KIND. HE CARED SO MUCH ABOUT OTHERS AND WAS NEVER TOO BUSY TO STOP AND ASKED ABOUT HOW YOU AND YOUR FAMILY WELL BEING.....SO SORRY TO HEAR OF HIS PASSING....MAY HE REST SWEETLY AMONG THE ANGELS. HE WILL CERTAINLY BE MISS.....MISS A MORGAN...MANHATTAN DIST......
A MORGAN
Coworker
February 15, 2021
I remember Joe Vittoria to be kind, brilliant in business, fun....and most of all a magnificent husband and father. His beautiful wife was always the wind beneath his wings. Their marriage was beautiful to behold. Those memories will heal his family's broken heart.
Bernadette Castro
Friend
February 7, 2021
I am sad to hear about Joe's passing. While we share the same name and similar family story. We have only spoken a few times but am proud to say that all I know about Joseph over the past 40+ years that was made aware of Joe and his exploits has been wonderful to hear about and share on the rare occasion that we spoke.

My sincerest condolences,
Joseph Vittoria
New Canaan Ct.
Joseph Vittoria
Acquaintance
February 3, 2021
May your hearts soon be filled with wonderful memories of joyful times together as you celebrate a life well lived. Please except my sincerest condolences to you & your family for the loss of your loved one.
Simone Taylor
February 1, 2021
I so well remember the times we were together in the Greenwich, Ct. area and you and Joe were always so thoughtful and kind. I lived on Pecksland Rd in those days -- now live in Dallas. Lost Wayne in 1998. My sincere sympathy to you. Jan Calloway
Janice W Calloway
Friend
January 28, 2021
What a life, full of love and adventure, what more could you ask for. God bless you all.
Steve Knierim
January 28, 2021
I was heartbroken to hear of Joe’s passing. Never in my life have i ever met a man so accomplished and so genuine. Joe was an amazing CEO and a remarkable person. His charisma and character were second to none. He gave Avis its culture and he epitomized We try harder. His legacy will live on in all our hearts. I feel so very honored to have known him.
Elaine Vito
Coworker
January 27, 2021
Dear Luciana, JoJo, Jerry, Audrey and Eddie,
I was very saddened to hear about Joe's passing. I remember from oh! so many years ago when he would turn up at Frungillo on a brief vacation, the excitement that would build around his visits, the unforgettable outings he would invite me to on the Lucky Beggar. Before I even knew what a gentleman was, I sensed he was modeling for us how to be one. What an example he was to us growing up! What a fortune you to have had him as a husband, Luciana, and as a father, my dear cousins!
Thinking of you these days - and spooky days there are. Stay healthy, please, you all. I look forward to sitting with you sometime soon to talk about our lives and gaze at the Gulf of Gaeta.
With affection,
Roberto
Roberto Rossi
Family
January 26, 2021
A wonderful individual to whom everyone who worked at Avis during those years owes a huge debt of gratitude. He will be missed.
RAYMOND M KOCH
Coworker
January 25, 2021
Dear Luciana,
Steve and I are so sorry to hear about Joe's death. I have so many childhood memories of him playing with me and my sisters. He was always such a good sport.

My favorite memory is when you both came to see her when she was near the end of her life. She had not been very responsive for a while, but when she saw Joe she just blossomed. She loved him so much and my hope is that they are together again.

Much love to you and your family,

Diane
Diane Roehm
Family
January 25, 2021
Andrew and I were so sad to hear of Joe’s death. We have wonderful memories of him-during your time inGX. Great pasta lunches and fun with the boys a schoool. In later years we had a fabulous day on his boat going round Capri and we came to your house inGreenwich many years ago when Andrew was working in New York. He was a true gentleman and great fun. We send special love to the boys and Audrey from our children and my special love to you Luciana for many happy laughs
Our love and sympathy. Andrew and Jill, Soundy undy
Jill Soundy
Friend
January 25, 2021
Dear Luciana. Andrew and I were so sad to hear of Joe’s death.although we have not seen you for ages we just want to say we have wonderful memories of our life together in GX. Fun with the boys at school and later sailing around Capri. He was a super man and great fun. We were privileged to know him. God bless and look after you all. Hopefully we will meet again one day. Our special love to the boys and my special love to you, Luciana. I remember our laughs together all those happy years ago. With love and sympathy Andrew and Jill Soundy
Jill Soundy
Friend
January 25, 2021
In loving memory of a wonderful person. Rest in Peace, Joe, in the arms of the Angels. Our sincere condolences to Luciana , Children and families.
Marie and Annemarie Alastra (Galaxy Hair Designs)
Friend
January 24, 2021
My deepest sympathy to Luciana and the family. Joe was a one-of-a-kind human being, filled with kindness, grace and brilliance. He will not be forgotten. Rest in Peace, Joe and may your memory always be a blessing.
Ilene Grifen
Friend
January 23, 2021
Joe will always be remembered as the best and kindest CEO of Avis Rent-a-Car. Always there for us and ready to help in any way he could. I always. I will always not only remember him as my boss but a great friend. You will be missed
Linda Thompson
Friend
January 23, 2021
To Luciana and family
Your pain and sorrow are shared by family and friends.May you find comfort in knowing so many care.I consider myself so fortunate to have worked for such a wonderful man.Our thoughts and prayers are with you and your family. Joe and Carol Scalabrino
Joseph Scalabrino
January 22, 2021
A wonderful life. I am Blessed to have known Joe; to have benefited from his wisdom and kindness. He will be sadly missed, but my memory of Joe will forever be with me and my family. I could not be more grateful. — Théo Spilka
Th&#233;o E Spilka
Friend
January 22, 2021
A visionary; truly inspirational; a man of the utmost integrity and simply a very kind person.
I will always cherish the times we spent together building those wonderful yachts. Forever grateful for the opportunities you gave so many.
Rest in Peace “Mr. Vittoria” Joe.
Luciana, Joe Jr. and and all the family, my deepest sympathies.
Paul
Paul Johnson
Friend
January 21, 2021
Joe was like a second father to me and was definitely my main mentor throughout my professional career. We me when Avis was the main sponsor at the US Open and I handled the tennis players for their hospitality program. I signed tennis professional Ivan Lendl, who at the time was the #2 ranked player in the world, with Joe and Avis as a spokesman right before the US Open Finals where Joe's wide sowed the Avis patch on his shirt and Lendl went on to win the US Open and be ranked #1 in the world. Like Avis, Lendl was #2 and tried harder. Thanks to Joe, Avis then became the Presenting Sponsor of the Dupont All American Tennis Championships at Sea Pines Plantation In Hilton Head where Joe's wife and became an undefeated doubles team over the years thanks to her and not me! Joe later serves on the Board of two of my companies, Disson Furst & Partners and Disson Sports & Entertainment. Joe was a great friend and mentor and also the most loving husband, father and grandfather I have ever known. He will be greatly missed but he will live on through his family and friends like me. Joe; you were the absolute best and I will miss our frequent calls and fun times together! Steve Disson
Steve Disson
Friend
January 21, 2021
To the Vittoria Family,
I am very saddened to hear about Mr. Vittoria's passing. I deeply appreciate his dedication and leadership talent that created the Avis ESOP. My family and I will forever be grateful to this beautiful soul!
Our sincere condolences to The Vittoria Family.
Michela Barra
Coworker
January 21, 2021
I was so blessed to have worked with Joe at Avis. As his Treasurer he entrusted me to do some of the most important transactions in the history of Avis, including the ESOP. God bless you Joe. May you rest in peace.
Gerard J Kennell
Friend
January 21, 2021
He was a kind and gentle soul who cared for his employees. Employees came first to Joe. Rest In Peace my friend
Linda Thompson
Friend
January 21, 2021