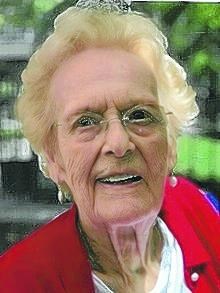 BORN
1925
DIED
2021
FUNERAL HOME
Lake Lawn Metairie Funeral Home
5100 PONTCHARTRAIN BLVD
New Orleans, LA
Virginia Ellen Reynolds, passed peacefully to our Lord on Friday, November 26, 2021, on her wedding anniversary, while at home in Covington, Louisiana, with her family. She was 96 years old. Virginia was born July 12, 1925, in Charlottesville, VA, to the late Lorentz and Elsie Ericksen, legal immigrants from Copenhagen, Denmark and Christiana, Norway. She was married for 41 years to her late husband Edward John Reynolds, until his death in 1990. She is survived by her sons, Edward Eric Reynolds (Pat) of Covington and Kevin Gerard Reynolds of Florida; a daughter in law, Katie Champagne Reynolds; 8 grandchildren, Edward Thomas Reynolds (Olivia) and Eric Patrick Reynolds; James Daniel Reynolds and Meghan Virginia Reynolds; Chance Michael Blase Reynolds, Michael John Reynolds, Jr., James Kyle Reynolds and Sean Blair Reynolds; her brother, Larry Ericksen (Linda) of Vestal, New York; and many cherished nieces and nephews. She was preceded in death by her son, Michael John Reynolds (Katie), daughter in law, Nola Leota Reynolds (Kevin), and her sister Eleanor Louise Darrow (Eugene) of Endwell, NY. Virginia grew up on a farm in Kirkwood, New York. She became a surgical nurse after receiving her RN degree from Binghamton State Hospital, School of Nursing in August, 1947. Ed & Virginia moved, with their three sons, to southern California in the late 1950s. She retired from nursing, as her true devotion was to her family. She never missed bringing her sons to daily swim practice and meets, Boy Scouts, many school events and Sunday mass. During her sons' college years, Ed & Virginia moved from California to travel the country in a motor home for over a year, until they quit the life of a "gypsy," as she would reference themselves. Ed and Virginia settled along the Anclote River in Florida for several years before moving near their sons in Metairie. Virginia loved playing basketball in younger years and she enjoyed swimming laps into her 70s. She enjoyed reading, camping the National Parks with her family, and taking trips with her brother and sister. Virginia volunteered at East Jefferson General Hospital a few days a week for over 25 years. During her service, she was recognized by the Hospital for her exemplary care and compassion for others during Hurricane Andrew. When not swimming laps or volunteering, she was driving 3 or 4 other ladies to mass or the rosary. Virginia was a devout and faithful Roman Catholic, and she lived a rich life constantly caring for others. She will always be loved by her family and her many friends. A graveside service will be held on Thursday, December 2, 2021, at 11:00 A.M., at All Saints Mausoleum, Lake Lawn Metairie Funeral Home and Cemeteries, 5100 Pontchartrain Blvd., New Orleans, Louisiana 70124. In lieu of flowers, donations may be made to St. Jude Children's Research Hospital. The family wishes to thank Sharon and the caregivers of The Windsor Senior Living, Mandeville; St. Tammany Hospice; and her caregiver, Karen, for their love and special care for our mother. The family invites you to share fond memories and condolences online at www.lakelawnmetairie.com.

Published by The Times-Picayune from Nov. 29 to Dec. 2, 2021.
To plant trees in memory, please visit the Sympathy Store.
MEMORIAL EVENTS
Dec
2
Graveside service
11:00a.m.
All Saints Mausoleum, Lake Lawn Metairie Funeral Home and Cemeteries
5100 Pontchartrain Blvd., New Orleans, LA
Funeral services provided by:
Lake Lawn Metairie Funeral Home
MAKE A DONATION
Please consider a donation as requested by the family.
MEMORIES & CONDOLENCES
Sponsored by Lake Lawn Metairie Funeral Home.
2 Entries
Our hearts are heavy with the loss of our dear sister. Please know that our thoughts and prayers are with you all during this most difficult time. Sending our love. Larry and Linda
Larry and Linda Ericksen
Family
November 29, 2021
Dear cousins, I always told your mom that she inspired me to be a nurse. You are in my prayers. Love, cousin Lisa
Lisa (Ericksen) McGee
Family
November 29, 2021
Showing 1 - 2 of 2 results