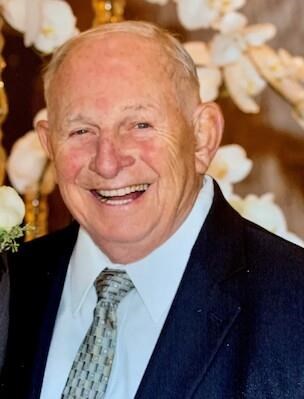 Joseph M. Procida, devoted husband of 60 years to his late wife, Dorothy, peacefully passed away from natural causes on March 31, 2021 at his daughter's home in Closter, New Jersey. Joe was 88. The son of Mario and Mary Procida, who immigrated from Italy, Mr. Procida was a graduate of Cardinal Hayes High School and served in the U.S Army. After serving in the Army, Joe continued his father's legacy, leading Procida Construction Corp. for over 30 years. His proudest accomplishments were his family and the buildings he built, notably the River Café and The Water Club in NY, as well as the many friendships he made along the way. Joe's interests were many. He relished travel with family and friends, nights at the opera, and teaching and coaching. In his youth, he was an accomplished amateur boxer. Joe lived life to the fullest. "He left nothing on the table" or "great guy" have been phrases used to describe him, (often followed by a friend's favorite "unforgettable" Joe Procida story). He was an avid pilot for over 20 years, cherishing weekend flights to places along the east coast. A self-taught, award winning winemaker, Joe loved spending weekends picking and crushing grapes with his band of fellow vintners. To his children, Joe was larger than life. To his many friends, he became "Papa Joe". To his grandchildren, he was "Grandpa". Joe is survived by his 4 children, Mario, William, Christine (Albericci) and Joseph, and leaves a legacy of 13 grandchildren and 2 great grandchildren. Services were held privately. To share an unforgettable Joe story, or express condolences, please visit his tribute page at www.barrettleberfuneralhome.com.


Published by The Record/Herald News from Apr. 5 to Apr. 15, 2021.
To plant trees in memory, please visit the Sympathy Store.
MEMORIAL EVENTS
To offer your sympathy during this difficult time, you can now have memorial trees planted in a National Forest in memory of your loved one.
Funeral services provided by:
Barrett Funeral Home
MAKE A DONATION
MEMORIES & CONDOLENCES
Sponsored by Barrett Funeral Home.
0 Entries
Be the first to post a memory or condolences.