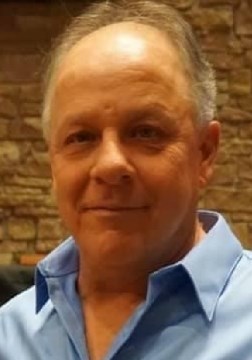 FUNERAL HOME
Adams & Swanson Funeral Home - North Platte
421 W. 4th St.
North Platte, NE
UPCOMING SERVICE
Visitation
Nov, 29 2021
5:00p.m. - 7:00p.m.
Adams & Swanson Funeral Home - North Platte
Send Flowers
Jon Douglas Hohnholt, 62, passed away on Nov. 22, 2021, at his home, with his wife by his side who lovingly cared for him throughout his eight-month courageous battle with pancreatic cancer. He was born on May 20, 1959, in Fort Morgan, Colorado, to his wonderful mother, Norma Hohnholt, and father, Bert Hohnholt. He grew up in Broomfield, Colorado, where he spent his childhood playing with his siblings and neighborhood kids in the backyard or the baseball field across the street from his house. The family moved to Wauneta where Jon attended high school. He played many sports and created special memories with some of his lifelong friends during that time. Jon had a bit of an ornery streak which resulted in his mother becoming very well acquainted with his high school principal. He graduated in 1977 and then moved to Kearney and attended Kearney State College for a year. On March 10, 1979, Jon married Jerlyn Gage, whom he forever sweetly referred to as his "old lady." They lived in Kearney for a year, and during that time they had their first daughter, Jessica. The family moved to Maxwell in 1980, where their second daughter, Melissa, was born and then moved to North Platte in 1990. Jon had a love for southern rock music, and because of that, he named both of his girls after songs from one of his favorite bands, The Allman Brothers. He loved building and creating beautiful structures, and right up until the time of his death he would record and watch home building shows where he would study new and different ways of doing things. He worked for 84 Lumber and Kildare Lumber before branching out and starting a construction business with partners, which eventually became Sunset Construction. He built quality homes and developed wonderful relationships right up until the spring of 2021 when his illness put him into early retirement. Jon loved life. He loved playing trivia and cards with his family, he enjoyed watching all sports, playing golf and keeping stats on all of his teams. He was a lifelong fan of the Denver Broncos and loved all Colorado sports. He looked forward to the family fantasy football league every year, where was very competitive with his grandsons. He loved traveling with his wife where the primary goal was searching out the best restaurants. He loved his family dogs and tolerated the cat. Jon's greatest joys were spending time with his two grandsons, Miles and Brady, and he always made them laugh. His death was preceded by his stepfather, Ivan Denker; grandparents, Charlie and Clara McBride and Everett and Edith Hohnholt; and mother and father-in-law, Keith and Mary Gage. Jon leaves behind his wife of 42 years, Jerlyn of North Platte; daughters, Jessica (Sam) Tedore of Omaha and Melissa (Tyler) Palacios of North Platte; grandsons, Miles Palacios and Brady Tedore; his mother, Norma Denker of North Platte; brother, Dennis (Judy) Hohnholt of Strasburg, Colorado; sister, Judi Starnes of Denver; brother, Jim (Denise) Hohnholt of North Platte; sister-in-law, Cherie (Chris) Wallace of McCook; brothers-in-law, Jim (Cindy) Gage of Longmont, Colorado, and Mike (Julie) Gage of North Platte; his little dog, Bucky; and many nieces, nephews, friends and neighbors. All of these he loved and touched deeply. Memorials are suggested tothe Callahan Cancer Center or the Gift of Hope Cancer Foundation. Services will be at 4:30 p.m. Tuesday, Nov. 30, at the First United Methodist Church with the Rev. Dr. Douglas Delp officiating. Casual or sports attire is requested, no Chiefs or Raiders attire. The service will be livestreamed via the Adams & Swanson Funeral Home Facebook Page for those unable to attend. The memorial book may be signed from 9 a.m. to 7 p.m., with family present 5-7 p.m. Monday, Nov. 29 at Adams & Swanson Funeral Home, which is in charge of arrangements.
Published by North Platte Telegraph on Nov. 26, 2021.
To plant trees in memory, please visit the Sympathy Store.
MEMORIAL EVENTS
Nov
29
Visitation
5:00p.m. - 7:00p.m.
Adams & Swanson Funeral Home - North Platte
421 W. 4th St., North Platte, NE
Nov
30
Service
4:30p.m.
First United Methodist Church
NE
Funeral services provided by:
Adams & Swanson Funeral Home - North Platte
MAKE A DONATION
MEMORIES & CONDOLENCES
Sponsored by Adams & Swanson Funeral Home - North Platte.
5 Entries
I am so sorry to hear about the passing of Jon. My deepest sympathy goes out to all of your family. I’ll be keeping all of you in my thoughts and prayers during this difficult time of grief.
Ginger Foust Rivera
Friend
November 25, 2021
May God bless you and your family in this time of sorrow.
Marlene Gibson
Acquaintance
November 25, 2021
We so sorry to hear of Jon passing , our thoughts and prayers are with all of you.
Bob and Pat Edis
Friend
November 25, 2021
It’s hard to understand the profound hole in my heart that losing my brother has left. Jon was not only my brother, but my loyal and trusting friend. Without him the past several years would have seemed so much more empty. I loved playing Canasta with him, and am happy for his sake that he won the last game we played. That tickled him too, “glad to have been the winner” he said and we laughed.

I will miss his unassuming attitude and his keen sense of humor.

I hope he’s hanging with John Lennon, George Harrison, Duane and Greg Allman and at peace.

I love you forever little brother.

Judi
Judi Starnes
November 24, 2021
Jeryln & Girls, Norma and Jim:
There are just no words to describe the loss that you all must feel with the passing of Jon. While I did see Jon recently, probably at Mary Etta’s funeral; it was a few years back that I really spent time with him. He walked me part way home -down to the bridge from the pub and we laughed about people we knew in common and generally old times. I loved his upbeat attitude and great since of humor. I never really saw him cross with anyone and I remember asking my mom who were those two “jolly boys” who moved to town. Both Jim and Jon quickly became well liked and a staple of our lovely hometown. Jon was a friend of everyone and always had a smile on his face. I’m so sorry to hear he has left us so soon. My true condolences to you and yours.
Sandra Maddux
Friend
November 24, 2021
Showing 1 - 5 of 5 results