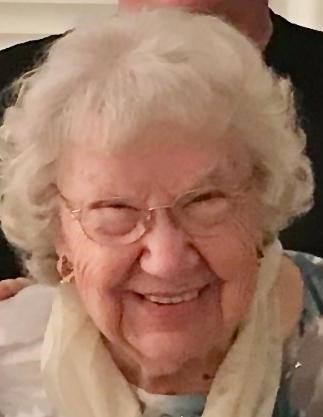 Sue E. Dyer, loving wife, mother, grandmother, daughter, sister, friend, teacher and volunteer, passed away on April 19, 2021 at the age of 96 at her home at The Mayflower retirement community in Winter Park. She entered the world on January 7, 1925 as Sue Ellen Gesling, the youngest of five children all raised in Lancaster, Ohio, and she maintained a close connection with her beloved hometown throughout her life.

Sue attended Lancaster High School and Bowling Green State University, where she formed a close bond with her Alpha Xi Delta sorority sisters as students during World War II. From there, she became one of the first women awarded a master's degree in business administration at Northwestern University. To support herself, she sold gloves at Marshall Fields in downtown Chicago. Just 25 years old, she returned to Bowling Green to teach mostly veterans attending college under the G.I. Bill.

Sue met Richard "Huck" Dyer, a handsome former professional baseball player and Mormon from Utah, at an Ohio State football game. They married in 1951 and shared 43 years together until his too-early passing in 1994. Together they raised five children in a house filled with warmth and laughter. In Madison, Wisconsin and then Maitland, Florida, the Dyer home and yard were the hub of neighborhood activity.

Sue returned to teaching at Winter Park High School, alma mater to all five of her children. She was an award-winning faculty member from 1972 to 1990 and introduced Fashion Merchandising to the curriculum. She later self-published a book, The History of Fashion from A to Z.

After retiring, Sue focused her talents on her adopted hometown, where she volunteered at the Maitland Historical Society, the Maitland Women's Club and the Maitland Civic Center. She served on the Orange County Council on Aging and was instrumental in construction of the new Maitland Senior Center. Her 80th birthday was proclaimed "Sue Dyer Day" by the City of Maitland, and she was later named "Volunteer of the Year." She was a voracious reader, loved playing golf, and volunteered in the scorekeeper's tent at the Walt Disney World Golf Classic for 20 years. Sue's last 12 years were spent at The Mayflower, where she served as president of the Resident's Council and found many dear friends.

But Sue's greatest legacy was her all-encompassing love for her family, which she demonstrated every day of her life. By example, she taught them courage in the face of adversity, the value of a positive attitude, and the support and security born of unconditional love.

Sue was preceded in death by her parents, William W. Gesling and Sue Crump Gesling, and her siblings, William J. Gesling, Martha Gesling Weber, Mary Lou Gesling Payne Spangenberg and Joan Gesling Ward. She is survived by her children, Matthew H. Dyer, of Pinehurst, North Carolina, W. Thomas Dyer of Winter Park, Florida, Sue E. Dyer of Winter Park, Florida, James R. Dyer of Longwood, Florida, and Mary C. "Marcy" Dyer Aydt of Maitland, Florida, and nine beloved grandchildren.
Published by Orlando Sentinel from Apr. 29 to May 2, 2021.
To plant trees in memory, please visit the Sympathy Store.
MEMORIAL EVENTS
To offer your sympathy during this difficult time, you can now have memorial trees planted in a National Forest in memory of your loved one.
MAKE A DONATION
MEMORIES & CONDOLENCES
Sponsored by The Orlando Sentinel.
13 Entries
Sue Dyer was such a sweet and wonderful person and teacher. I was a student at WPHS from 81-84. She helped me find my passion for design and fashion. She helped young people grow and soar. So sorry for you loss. She was a truly amazing person.
Kelly Garcia
May 6, 2021
I was a student at WPHS from 1977-80. I worked for Mrs. Dryer in the school store my Jr. and senior years. she was a wonderful listener, an inspiring teacher and a true friend. I learned so much about responsibility, trust, and honor from her gentle example and trust. I'll always remember her and be grateful I knew her. My deepest condolences for your loss. she was a truly great woman.
Jamie LaMoreaux
May 4, 2021
Sue was one of the most upbeat and personable humans I ever had the pleasure of knowing. Every time I saw her after retirement from WPHS, she always caught me up on you, Marcy. She will be missed by all.
Mary Piercey
May 4, 2021
Your mom was a remarkable woman. I admired her mind and her get up and go. We used to have brunch every Sunday until she didn't feel like eating any more. She was a good friend in our investment club and in the Mayflower.
Dot Cline
May 3, 2021
Mrs Dyer was such a wonderful person & mentor. Our thoughts and prayers go out to all that loved her! WPHS Class of 1985-DECA student. Tracy Linsley Carlson
Tracy Linsley Carlson
May 3, 2021
I am so sorry for your mother´s passing. She was a wonderful, caring teacher that I had the privilege of attending her DECA class in 1977. I will never forget her smile and kindness. She always made us feel important. Years later in the 80´s , I happened to be in the Orlando Sentinel for employee of the month. That sweet precious angel looked me up and sent the most meaningful congratulations card I had ever received. I still have this card and keep it with my most precious things. She is an angel looking over us now.
Jean Clement Gallagher
May 3, 2021
To the Dyer family, I offer my prayerful sympathy on the passing of Sue, who was the best writer in my creative writing class at the Mayflower (2017-19). Her warmth and intelligence shone in every piece she wrote, and I am grateful to have known her for two years.
Gerald Schiffhorst (UCF Professor Emeritus of English)
May 2, 2021
What a lovely tribute is the memorial message. I taught with Sue at Winter Park High School for 14 years. I used to stop by with Charlie at Thanksgiving and Christmas at your house for some levity. Charlie was Huck's golf partner.
Jeanne Odom
May 2, 2021
Sue was one of my all time favorite ladies at WP. She was so full of energy, and always so positive, and often so funny. The tribute to her shows what a wonderful life she had, and how much she contributed to our world.
Renee Bell
May 2, 2021
Sue was always so upbeat and friendly. She was a joy to be around. Her very well attended pre Christmas get together was a classic All looked forward to. My thoughts and prayers are with her family. Sue will be missed but not forgotten.
Mimi mcdowell
May 2, 2021
Anyone who knew her will remember that twinkle of kindness, intelligence and humor in her eyes. What a wonderful legacy of love she left in the world.
Julie Aydt Williams
May 2, 2021
I came to teach at Winter Park High School 2 years after Mrs. Dyer had retired. Though I never met her, her photo above and the picture painted by this lovely eulogy of her life make me wish I had. My sympathies to her children and grandchildren. I´m sure you miss her very much.
Mrs. Cindy Hubbard
May 2, 2021
I worked with Sue at WPHS from 1983 until she retired. She always had a smile for me. One day Sue asked if my yearbook staff would like to work with her and Track Shack to sponsor a run through WP Pines. It was a pleasure working with her and the runners liked being able to warm up in the gym. It was a cold morning. She will be missed.
Joanne Pryor
May 2, 2021
Showing 1 - 13 of 13 results