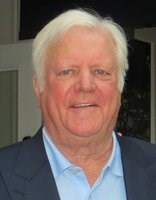 BORN
1945
DIED
2021
FUNERAL HOME
Howard Quattlebaum Funeral, Cremation and Event Center
754 Us Highway 1
North Palm Beach, FL
Jay Higgins
North Palm Beach - The world lost a special man on August 6, 2021. Jay Francis Higgins passed away peacefully surrounded by his family after a very courageous struggle to recover from open heart surgery. "The Higs" always dreamed big, and planned ahead, and was able to time everything perfectly.
Jay was born on June 25, 1945 in Gary, Indiana. He attended Andrean High school, where his brilliant financial mind starting turning during history class. "What I saw was that when the steel mills were down and Gary was hurting, and stocks and commodities and everything else were going down dramatically, there were these things called bonds that went up. That fascinated me. The Gary Post Tribune didn't have stock tables in their one-page financial section. I had to go to the Chicago Tribune to figure things out. I made a mental note that this was definitely something I wanted to learn more about."
From there, Jay continued to make his mental notes at Princeton University, where he graduated Magna Cum Laude with a Degree in Business in 1967. He worked as a waiter in the dining halls while a scholarship student there and has been a generous benefactor of that university and his beloved Cannon Club, which thrives today because of his leadership and generosity.
After receiving his MBA at the University of Chicago, his career in the financial world was meteoric. On Wall Street, Jay was viewed as the Architect of Salomon Brothers Mergers & Acquisitions, Corporate Finance, and Worldwide Investment Banking. After retiring from Salomon as Vice Chairman, Jay founded and operated Bengal Partners and Cloverleaf Partners. He was also a former director of Rafferty Asset Management.
Jay was a fiercely loyal friend; his closest describe him as "a monumental personality; a wonderful, unique, loyal, incomparable friend with a devilish sense of humor who 'touched all the bases' during a life lived fully and generously." His philanthropic efforts cannot be accurately listed, because while he was a fundraising giant, he also stepped in behind the scenes more times than anyone will ever know.
He was a member (and often board member) of countless clubs, including the New York Athletic Club, the Brook Club, Winged Foot, the Lawrence Beach Club, and the Beach Club of Palm Beach. Jay was also honored to be a Knight of Malta. A proud owner & managing director of Waterville Golf Links for nearly forty years, Jay built his second home with Gail in Waterville, County Kerry, Ireland, what he considered his true home country.
The only thing Jay loved more than his friends, the stock market and high school sports was his family. Jay was predeceased by his parents, Veronica and Francis; his sister, Margaret and brother, James. He is survived by his beloved wife, Gail Joy; daughters Maura Semmes and husband Gibson, Kerry Higgins, Erin Higgins; son Conor Francis Higgins and wife Anna; niece Catherine Cindric and husband Dominic and nephew John Higgins; grandchildren John Semmes, Finnian Francis Higgins, and Virginia Higgins, who the family was overjoyed to welcome August 10, 2021. He is also survived by ten dogs, grand-dogs and god-dogs (Jay was allergic to and pretended to hate dogs, but he loved his family ten times more than that).
He will be forever missed.
The Higgins Family would like to thank the Nurses at the Jupiter Medical Center and Trustbridge Hospice and their many, many friends for their compassion and kindness to Jay and his family during his final days.
A private memorial will follow.
In lieu of flowers, donations can be made to the Higgins Memorial Fund at Princeton Cannon Dial Elm Foundation, PO 7788, Princeton, New Jersey, 0543-7788 or online at https://cannonclub.com/donate.
Published by Palm Beach Daily News from Aug. 14 to Aug. 15, 2021.
To plant trees in memory, please visit the Sympathy Store.
MEMORIAL EVENTS
To offer your sympathy during this difficult time, you can now have memorial trees planted in a National Forest in memory of your loved one.
Funeral services provided by:
Howard Quattlebaum Funeral, Cremation and Event Center
MAKE A DONATION
MEMORIES & CONDOLENCES
Sponsored by Howard Quattlebaum Funeral, Cremation and Event Center.
5 Entries
Although I never knew Mr. Higgins, his biography revealed a life of service to others especially as a Knight of Malta.
Keith Douglass
August 21, 2021
May Jay's soul and the souls of all the faithful departed, through the mercy of God, rest in peace, Amen
BJ Barone
August 19, 2021
Jay and Jimmie Higgins grew up across the street from me in Gary. Wonderful people. So sad to lose both of them Doug
Doug Nabhan
August 18, 2021
Gail, We treasure our time working together to make Cardinal Newman a better place. We will make a gift to CN in his honor and love.
Rob & Julie Reveley
August 17, 2021
We would like to extend our sincere condolences to all the Higgins family at this heartbreaking time for you. Our thoughts and prayers are with you. May Jay´s soul rest in eternal peace. Our warmest regards Ursula & Eric Jouen (Waterville, Co. Kerry)
Ursula & Eric Jouen
August 15, 2021
Showing 1 - 5 of 5 results