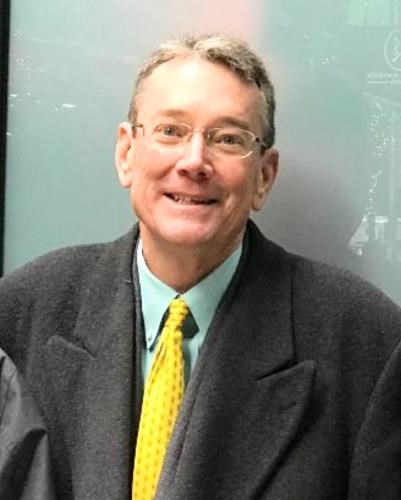 ABOUT
Churchland High School
FUNERAL HOME
B.W. FOSTER FUNERAL HOME - PORTSMOUTH
1926 HIGH ST
Portsmouth, VA
James McCaw Pickrell Jr. was as loyal as they come - to his family, to his father's law firm where he worked for 30 years, to his football-watching companions, his college alma maters, the New York Mets, and even to a Caribbean vacation hangout where everybody knew his name. Jim Pickrell left behind all of those loves when he died November 11, 2021, at age 60.

Jim grew up in Churchland, excelling in Boy Scouts, in which he reached the Eagle rank. After graduating from Churchland High School in 1979, he went on to The College of William & Mary, earning a bachelor's degree. From there, he headed to the then-T.C. Williams School of Law at the University of Richmond.

It took only a year of work at a prominent Richmond law firm to convince Jim that he belonged back in Tidewater, and he joined the law firm of his father, James M. Pickrell Sr. Jim worked his way up through the firm now known as Kellam, Pickrell, Cox & Anderson, and helped mentor a sister, now an attorney with the firm. Among Jim's clients were the Chesapeake Economic Development Authority, City of Norfolk, Hampton Roads Sanitation District and Southern Bank.

When Jim discovered something or someone he loved, he stuck with them: beginning with his wife of 27 years, Amber Wesley Delgado Pickrell, with whom he raised two sons, James McCaw Pickrell III and Robert Wilson Quick Pickrell, at their home in West Ghent. Another child, daughter Sarah Wesley Pickrell, preceded Jim in death.

Jim thoroughly enjoyed golf outings with his wife and sons and also coaching his sons' Little League Mets baseball teams to championships. On Sunday afternoons, everyone knew he'd be hanging out at his backyard fireplace with his buddies, known as the Pit Crew. But unless they were members of that select bunch, no one ever knew what was said or done during those gatherings because what happened in the Pit stayed in the Pit.

Jim's love for the New York Mets was unbreakable, just like an annual must-visit to the beautiful and rugged Jost Van Dyke, one of the British Virgin Islands. There, Jim joyously held down a seat at a bar known as the Soggy Dollar. When Jim socialized back home in Norfolk, it was often in the company of great friends with whom dinners traveled a world of conversation topics.

Jim was a member of St. Andrew's Episcopal Church, where he served as an acolyte team captain. He also served on the Hampton Roads advisory board of Southern Bank and was a member and Past President of the Virginia Club.

He was most proud of his sons and happy that they both followed him to William & Mary. Besides his wife and those sons, Jim also is survived by his sisters, Elizabeth P. Abiles (and her husband, Jose), and Janice P. Anderson (and her husband, James). Jim also leaves behind nieces, nephews, great nieces and a great nephew. In addition to a daughter, Jim was preceded in death by his father and his mother, Janice Aileen Quick Pickrell.

Funeral services will be held at 11:00 a.m. Wednesday, November 17 at St. Andrew's Episcopal Church in Norfolk, with a private burial the following day at Hollywood Cemetery in Richmond. In lieu of flowers, the family requests that donations be made either to The College of William & Mary, P.O. Box 8795, Williamsburg, VA 23187 or St. Andrew's Episcopal Church, 1009 West Princess Anne Road, Norfolk, VA 23507. Condolences may be registered at BWFosterFuneralHome.com.
Published by The Virginian-Pilot on Nov. 14, 2021.
To plant trees in memory, please visit the Sympathy Store.
MEMORIAL EVENTS
Nov
17
Funeral service
11:00a.m.
St. Andrew’s Episcopal Church
Norfolk, VA
Funeral services provided by:
B.W. FOSTER FUNERAL HOME - PORTSMOUTH
MAKE A DONATION
MEMORIES & CONDOLENCES
Sponsored by the family.
20 Entries
Amber: You and Jimmy's surviving family have my deepest sympathy and condolences. I was a neighbor from 1960 to 1968 in Churchland. I fondly remember many days playing outside in his backyard with the Bassett hounds and the wonderful Christmas parties with a whole Smithfield Ham -- which was a highlight of the holidays. We remained friends through elementary school, jr. high and high school but lost touch when he went to W&M and I went to Virginia. I have followed his legal career with pride and interest, and I have always intend to drop by and catch up. Reading his obituary and the guest book comments makes me regret not having followed through even more. It seemed like there was always time .... Know that you have been in my thoughts and prayers since I learned of Jimmy's passing. If you ever travel to Las Vegas, please look me up and share a drink and stories of your life with Jimmy.
Lee Roberts
Neighbor
November 29, 2021
Amber, I have been out of town and just learned of Jim's passing this week. My sincere condolences to you and Jimmy and Bobby. You are all in my thoughts at this difficult time.
Karen Eck
Neighbor
November 25, 2021
Deepest sympathies. Many of us knew him as "Pick" at William and Mary and he brightened any room he walked into with his kindness, wit and humor. I'm not at all surprised he became a successful lawyer and he could have been a comedian too. You found yourself laughing before the joke was over because Pick was telling it. Farewell.
Bob Culp
Friend
November 22, 2021
So very sorry for your family´s deepest loss. You all are in our prayers during this time of loss.
Andrew and Anne Carney
Friend
November 22, 2021
I am so sorry for your loss. We will keep you and the family in our prayers
The Smiths- jason,Nicole, piper and zoe
November 17, 2021
Amber I am so very sorry to hear of Jim's passing. Sending my sincere condolences to you and your boys. Susan
Susan Lambert
November 17, 2021
Our sincere condolences to Amber and family. We have you all in our thoughts and prayers at this difficult time.
Dan & Carol Aubuchon
November 17, 2021
Amber, we are thinking of you and the boys during this sad time. There a many happy memories of your family when the boys were at WH Taylor. Prayers and best wishes, always.
June and Charlie Hartig
Friend
November 17, 2021
Jimmy has helped us so much over the past six years that we have known him. We will miss his good counsel and his great sense of humor. Such a great loss.
Crawford and Karen Anderson
November 16, 2021
So Sorry to hear about Jim! I am shocked and so sad! I have fond memories over at his sister's house, Jan. So sorry for your loss!
Debbie Koelliker
Friend
November 16, 2021
My condolences to your family who has lost such a husband, dad, and brother. The legal community has lost smart, honest, and zealous advocate and Norfolk had lost a fine citizen.
Derek Turrietta
November 16, 2021
I remember Jim and Amber from the prepared childbirth class I taught when they were expecting Sarah. I also remember when one of your boys was born .What memories. Treasure those memories in your heart. Lisa, RN from Sentara Leigh Maternity Unit.
Lisa Bradshaw
November 15, 2021
I am so very sad to learn of Jim’s death. He was a good friend in law school and just an all-around great guy to have as a classmate during those years! Loved crossing paths in the years after school and catching up with him. Condolences to all his family. I will keep all in my prayers.
Barbara Balogh Saunders
Classmate
November 15, 2021
Our sincerest condolences to the entire Pickrell Family. We have so many fond memories of the hours and hours we shared on the baseball field – Fleet Park, Azalea, and Maury High School. Watching him coach his sons was to see him at his happiestwearing NY Mets colors and smiling at his sons. Our thoughts and prayers to the whole family, especially, Amber, Jimmy and Bobby.
“Some final thoughts
During the final inning
About what’s important
And what is winning
It’s all about the moments
And not about the game
The memories that we make.
But then the game is over
Full of excitement, joy and tears
And you have a precious memory
That will last you all your years”

Love,
Karen, Tony, Patrick, Daniel, Andrew, & Joseph Califano
Norfolk, VA
Califano Family
Friend
November 15, 2021
We are so very sorry for your loss, Amber, Bobby and Jimmy. Jim was such a wonderful man. I enjoyed working with him and your dad when I first passed the bar. Jennifer & Michael
Jennifer & Michael Stanton
Work
November 15, 2021
Elizabeth, I am so sorry to hear about the loss of your brother and hope the memories you have of him give you comfort. It has been years since we were classmates at Churchland and even more years since we played together as pre-teens. I do remember a much younger version of your brother and again, am so sorry that he passed at such a young age. Bonnie (Fariss) Parker
Bonnie Parker
November 14, 2021
My thoughts and prayers go out to Jimmy's family and friends. I worked with him at Kellam Pickrell from 2003 until I moved to Georgia in 2009, and he was a great boss and friend. He will be missed for sure. I am so sorry.
Jeanette Crandle
Work
November 14, 2021
My condolences on your loss. I only knew Jim briefly in college, but I know that Tidewater lost a good one in him.
Dan Halberstein
Acquaintance
November 14, 2021
I was stunned and saddened to hear of Jimmy’s passing. My deepest sympathies go out to you during this time of heartbreak and devastation. I pray God wraps his loving wings around you and brings you comfort and peace.

“ ‘ “The Lord bless you
and keep you;
the Lord make his face shine on you
and be gracious to you;
the Lord turn his face toward you
and give you peace.” ’ Numbers 6:24-26 NIV
Dianne Edmondson
Friend
November 13, 2021
Sympathy to Jim’s family. He was a very special person that We enjoyed knowing .
BettyDriver McCaa
Acquaintance
November 13, 2021
Showing 1 - 20 of 20 results