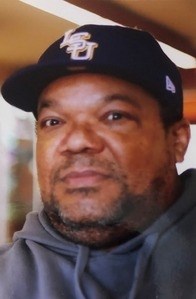 BORN
1962
DIED
2021
FUNERAL HOME
Greenidge Funeral Home Inc - Atlantic City
301 Absecon Boulevard
Atlantic City, NJ
Richardson, Anthony Eugene, - 58, of Vineland, passed suddenly on April 13, 2021. Anthony, or "Tony", as he was called by many, was born in Oakland, California on August 22, 1962. A 1980 graduate of Pleasantville High School, he was the only student that never missed a day of school in his 4 years there. He was also known for his awesome skills in football and baseball, having played since he was a child. From Tornados to Greyhounds, Anthony was encouraged and supported in his love for sports by his loving parents, family, and friends. Anthony attended West Virginia University where he studied Engineering. Pleasantville City Cab was his most recent employment. Anthony is predeceased by: his parents, Hosea and Leonora Richardson; biological mother, Dorothy Franklin, and brother, David Richardson. He is survived by: his aunts; cousins and a host of other family members and friends. Graveside services will be 11:30AM, Thursday, April 22, 2021, Mount Calvary Cemetery, Route 322, Egg Harbor Township, NJ. Arrangements entrusted to Greenidge Funeral Homes, Inc. where condolences may be left at www.greenidgefuneralhomes.com.
Published by The Press of Atlantic City on Apr. 20, 2021.
To plant trees in memory, please visit the Sympathy Store.
MEMORIAL EVENTS
Apr
22
Graveside service
11:30a.m.
Mount Calvary Cemetery
Route 322, Egg Harbor Township, NJ
Apr
22
Graveside service
11:30a.m.
Mount Calvary Cemetery
6804 Black Horse Pike, Egg Harbor Township, NJ
Funeral services provided by:
Greenidge Funeral Home Inc - Atlantic City
MAKE A DONATION
MEMORIES & CONDOLENCES
Sponsored by Greenidge Funeral Home Inc - Atlantic City.
15 Entries
RIP to my beloved nephew! You will be missed.
THE Corbett Family
May 6, 2021
Ant my man, rest well and know you have always been a true and loyal friend. My prayers and condolences to all whom had the pleasure of knowing you.
Mike Manning
April 23, 2021
RIP ANTHONY , you were a great friend on school , God Bless ! Thoughts and prayers to all !
Denise Ravilious-Lombardi
April 22, 2021
our condolences From The Hughes Family RIP God bless you our Friend
Nikita and Lisa Hughes
April 22, 2021
RIP nephew you surely will be missed, we will never forget you Anthony!!!
From stanley and sandra Watts and family
April 22, 2021
Rest in peace, my nephew!
Penny Mallory
April 21, 2021
RIP good friend
Logan family
April 21, 2021
Rest in peace my chidhood friend
Miriam leggette
April 21, 2021
REST IN PEACE TONY. YOU WERE ALWAYS A GOOD PERSON. PEACE AND BLESSINGS TO THE FAMILY. THE MANNING FAMILY.
Gary Manning
April 21, 2021
We are so sorry for your loss our hearts and prayers go out to the family and may Tony forever Rest Peacefully... He was our neighbor on Chestnut Street in Pleasantville he was such a nice person... God Bless You....
Taliaferro Family
April 21, 2021
Our condolences from the watts family.
Leona watts
April 20, 2021
Condolences from the family .
Leona watts
April 20, 2021
To the family condolences on your lost. Anthony was an angel for my father George Gillespie while at the Lincoln Center in Vineland, NJ.
Diane Gillespie and family
April 20, 2021
I pray for all the family that your heart is not too heavy, as Tony enjoyed life and lived it to the fullest. He would want us not to cry, but remember the fun times
Evette Kaplan
April 20, 2021
Rest in peace my dear friend
Tito ramos
April 20, 2021
Showing 1 - 15 of 15 results