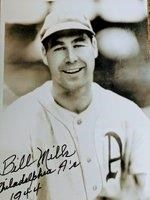 BORN
1919
DIED
2019
Mills, Jr., William H.
William H. (Bill) Mills, Jr passed away peacefully at E. T. York Hospice in Gainesville, FL on August 9, 2019. Bill was 99 years old. He was born on November 2, 1919 in Boston MA. He lived in Pawtucket, RI for 35 years before moving to Port Charlotte FL in 1976.
Bill graduated from Arlington High (MA) where he played football and basebal. He captianed both teams in his senior year. Following high school Bill attended Coburn Classical Prep in Waterville, ME where he played football and baseball. Bill then went on to attend the College of Holy Cross (MA) where he played football and baseball. Following a successful career at Holy Cross Bill played professional baseball for the Philadelphia Athletics for Connie Mack from 1944-45. Bill also played several seasons for the New England Baseball League (Slaters) from 1946-50 while teaching Math and coaching baseball and football at Goff Jr. High in Pawtucket, RI.
After 30 years of teachng Bill retired with his wife Rita to Cape Cod for the summer months and Port Charlotte FL for the winter. On approximately 2004 he continued to live full time in Port Charlotte and lived until 2017 when he moved to Gainesville FL.
He was a member of the Pawtucket Teachers Alliance, a member of the Major League Baseball Players Association and lifetime member of the Pawtucket Lodge of Elks (#920).
Bill was preceded in death by his parents William H. Mills Sr and Mary (Mansfield), and his son William (Buster) Mills. Bill is survived by his wife of 37 years Rita L. Plamondon Osfield Mills, three daughters Christine Mills Knott (Adrian), Pamela Mills Reeves (Roger), Janice Mills Fitton (Patrick), stepsons John Osfield, Dr. Kenneth J. Osfield (Betty) and grandsons Mark and Scott Knott, Kyle and Ryan Reeves, Torin and Conar Fitton, Todd Osfield, Kyle Osfield, and granddaughter Emma Osfield, and 9 great grandchildren.
A celebration of his life will be held at Saint John Paul II Parish, 750 Central Ave, Pawtucket RI at 10:00 am on August 31, 2019.
Published by The Providence Journal on Aug. 19, 2019.
To plant trees in memory, please visit the Sympathy Store.
MEMORIAL EVENTS
Aug
31
Celebration of Life
10:00a.m.
Saint John Paul II Parish
750 Central Ave, Pawtucket, RI
MAKE A DONATION
MEMORIES & CONDOLENCES
3 Entries
I too had Mr. Mills as a teacher. He was very kind and likeable. My sympathy to his family.
Liz Alix
August 21, 2019
MY , STEP AUNTIE ERICA HAD HIM FOR A GYM TEACHER AT WILLIAM TOLMAN HIGH SCHOOL AT 7TH GRADE ..... SO , RESPECT , IN YOURSELF !!!!!! BROTHER JOHN 2:02-2:25 ????? MATTHEW 14:10 .... MATTHEW 28:58 ????? & MARK 1:11 .....
DYLAN TIMOTHY FISHER
August 20, 2019
I attended Goff from 1966 to 1969. Mr. Mills was my math teacher for 8th grade. Just seeing this passing of him reminds me of how kind he was to me. It is because of him that I loved math. He treated his class with a sweet and loving manner. I 2as a shy student so it meant alot to me to have him be so open. I am so sorry for your loss of such a humble soul.
Jane Cairns
August 19, 2019
Showing 1 - 3 of 3 results