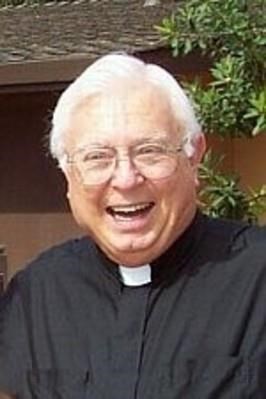 The Reverend William "Bill" Marsden Cowans was born on November 7, 1931, in Redlands, CA and passed away at his home on November 3, 2016, after a two year battle with melanoma. Bill will be greatly missed by his family and friends.

Bill was preceded in death by the love of his life and his wife of 48 years Jane Anne Cowans, his parents William Cowans and Agnes Eleanor Mary Cowans and his sister Margaret Stern.

Bill graduated high school from Harvard School in North Hollywood, CA in 1950. He attended Pasadena City College and Occidental College before enlisting in the Navy in 1953 where he became an Air Traffic Controller 2nd Class stationed at NAS Ford Island, Pearl Harbor Hawaii. After his discharge from the Navy in 1957, he attended San Diego State where he received his BA in History in 1958. He then decided to go into the Episcopal ministry and attended Church Divinity School of the Pacific in Berkeley, CA, where he received his Master of Divinity. After his ordination in 1961, Bill served as curate at St. Marks, Palo Alto CA (1961-1963), vicar at St Thomas, Rodeo CA/St. Marks, Crockett, CA (1963-1967) and served the rest of his ministry at St. Thomas, Sunnyvale, CA where he retired in 1995.

In May 1954, Bill married Jane Anne Jones. They raised their daughters Malia and Charlotte in the Bay Area, retired to Redding, CA in 1995 and enjoyed 48 years of marriage until Jane's death in 2002.

Bill had many interests in addition to his ministry: sailing, airplanes, woodworking, weaving and computers. He explored them all with enthusiasm and energy. His sense of humor and warmth will be greatly missed by those who knew him.