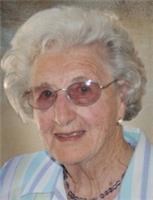 BORN
1920
DIED
2021
FUNERAL HOME
Struve and Laporte Funeral Chapel
41 West San Luis
Salinas, CA
Dorothy Baumann (Franscioni), 101, passed away peacefully Aug. 11, 2021 at her home in Salinas. We, her family, will greatly miss her keen sense of fun and humor, and her great stories.
She was born July 18, 1920 in Gonzales, the youngest child of Aquilino and Vittoria Franscioni.
She grew up on the family dairy on River Road and told us of her life there in the country, of her chores, and of raising her pets. She attended the Fairview one room schoolhouse, Gonzales Elementary School and Gonzales High School. After high school, she attended Cal Berkeley focusing on business skills.
She met her future husband, Bill Baumann of Soledad, in high school. When he was drafted in January of 1942 and stationed at Fort Benning, Ga., Dorothy bravely took a Greyhound bus and met him there to get married in October of 1942. The radio blasted the local big rivalry game between Georgia and Alabama while the justice of the peace, paying more attention to the game, recited the marriage vows. When Bill was shipped overseas to join the war effort, she returned to Pacific Grove and rented the house next door to her sister, Ida.
When Bill returned from the war in 1945, they lived in Soledad, and Dorothy enjoyed working as a switchboard operator. They eventually settled in Salinas in 1951 where Dorothy fondly recalled working for Cornell Tractor Company during their early years there.
She and Bill had a lovely life together. They loved going to see friends and partying. Dorothy always kept the gardens and Bill was proud of his lawns. They enjoyed many camping, boating, and fishing trips. They traveled to Italy, Alaska, all over the US, and especially enjoyed their trips to Switzerland to visit her family.
She and Bill were avid sports fans, following many teams, especially rooting for the San Francisco Giants. They remained loyal Gonzales Spartan fans and had the honor of being inducted into the Spartan Hall of Fame. After Bill's death in 2005, Dorothy still faithfully followed the Giants.
Dorothy worked on election boards, and was a member of Angela's Angels, Monterey County Swiss American Club, the American Legion Auxiliary, and Pro Ticino Nord California.
She was preceded in death by her parents; her husband; her brothers, Emilio Pasque, Clement, Paul, and Lester Franscioni; her sisters, Ida Martignoni and Tillie Franscioni. Dorothy is survived by her sister-in-law, Vonnie Baumann; and numerous nieces, nephews, cousins, and friends who considered her family.
Special thanks go to Bill's cousin, Jo Schweizer, who took care of Dorothy during her final illness. This allowed her to remain in her home until her death.
A celebration of life will be held at a later date.
Donations can be made in Dorothy's memory to VNA & Hospice, https://ccvna.com/, PO Box 2480, Monterey, CA 93942; Salinas Rancho Cielo, https://www.ranchocieloyc.org/, PO Box 6948, Salinas, CA 93912; or to the donor's favorite charity.
Funeral Arrangements by Struve and Laporte Funeral Home.
Online condolences to www.struveandlaporte.com.
Published by Salinas Valley Tribune from Aug. 25 to Aug. 31, 2021.
To plant trees in memory, please visit the Sympathy Store.
MEMORIAL EVENTS
To offer your sympathy during this difficult time, you can now have memorial trees planted in a National Forest in memory of your loved one.
Funeral services provided by:
Struve and Laporte Funeral Chapel
MAKE A DONATION
MEMORIES & CONDOLENCES
Sponsored by Struve and Laporte Funeral Chapel.
1 Entry
I'm so sorry to hear of Dorothy"s passing. A wonderful lady who is with Bill now. Many a time they came to King City for a piece of pie or a cold drink with my parents Floyd and Dorothy Hughes. I will miss her at the Swiss picnics.
Karon Jo Nichols
August 18, 2021
Showing 1 - 1 of 1 results