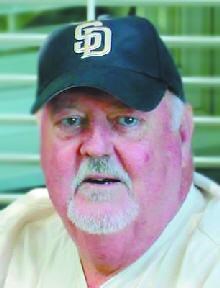 Blackwood, Thomas M. LA MESA -- A much loved husband, father, grandfather, brother and friend, Thomas M. Blackwood of La Mesa, passed away peacefully at his home March 22, 2014 with his family present. He had bravely confronted and fought his illness for a long time. He was born in Jacksonville, Florida and grew up in La Mesa, Ca. He attended school in La Mesa and graduated from Grossmont High School in 1962. Tom loved his sports and played in the La Mesa Little League, Pony League and was fortunate to play with the 1957 La Mesa Little League All Stars and played in the Little League World Series in Williamsport, PA. loving every moment of the experience. Tom moved away in the sixties to the Oakland Bay Area and then to the LA area to raise his family. While in the LA area, Tom became an avid golfer and met and kept life long friendships. He returned to La Mesa in 1997. Tom was a restaurateur for most of his life, running his own Jack-In-The-Box, Pioneer Chicken, Afternoon Delight, Wendy's and a 5 star restaurant, The 555. He is survived by his wife, Kitty; children, Tamara McCall, Paula Walker, Brian Blackwood, Traci Lampasona, Michael Nicholson, Scott and Shelley Nicholson. Together they had fourteen grandchildren, Justin, Mandy, Heather, Thomas, Nicolas, Rian, Vanessa, Annie, Breann, Riley, Faith, Reagan, Nathan and Jacob, and two great-grandchildren, Zacarias and Sylas; sisters, Paulette, Alison; brothers, Ro and Romaneth; nieces, Deena, Joley, Abby, Amanda, Jennifer, and nephew, Jason. A Celebration of Life will be held on April 26, 2014 at Harry Griffen Park Amphitheater from 11:00 to 3:00 p.m.

Published by San Diego Union-Tribune on Apr. 2, 2014.
To plant trees in memory, please visit the Sympathy Store.
MEMORIAL EVENTS
Apr
26
Celebration of Life
11:00a.m. - 3:00p.m.
Harry Griffen Park Amphitheater
CA
MAKE A DONATION
MEMORIES & CONDOLENCES
7 Entries
We still miss you!!!
Xoxo, Brian
Brian Blackwood
Son
May 25, 2021
Dad, I love you and miss you more now than ever before. I cannot wait to see you again in Heaven, but currently my heart and head are in pain. I am finding it very difficult to handle reflecting on the past and keeping myself and family forward. I wish I had you hear to talk with you about it.

Love,
Brian
April 26, 2014
Tom. from the first time I met you to the day I said goodbye, your love for your wife, family and the friendships you valued were apparent. Wisdom and your sence of humor will be missed but remembered. Just as my memories of you will always be good. Courageous you were, missed you will be.
Lisa Dryer
April 4, 2014
Tommy was a wonderful brother-in-law to me, and such a kind man, I thought the world of him.
Susan Blackwood Hunt
April 3, 2014
Tom, you will be missed more than you will ever know, you were the best dad and friend I ever had. thank you for loving my mom and all the family. your smile and jokes were "sweetness" to my ears. you had a rough time the last couple of years being in and out of the hospital and I could see the pain in your eyes not being able to participate in any swimming or golfing, but you wanted to live anyway, and be with family. your will for life was great, like that great boxer you always told me you were. until we meet again I pray to Jesus that you are loving your new Heavenly body. and oh ya, wipe that grin off your face. I love you Tommy
michael nicholson
April 3, 2014
Tom gave me my first job at the BurgerHouse in La Mesa, maybe one of his first jobs too, working with Fred Cottrell. 15, 16 years old, and full of ourselves. I will never forget Tom calling out at my first lunch, " Drop 25 " meaning patties, and it was on...Thanks Tom, I have never forgotten... Charles "Chuck" Taylor
April 2, 2014
Very sorry for your loss. Take comfort in knowing he's no longer in pain. You're family is in our prayers.
Linda & Nan Ward-De Felice
April 2, 2014
Showing 1 - 7 of 7 results