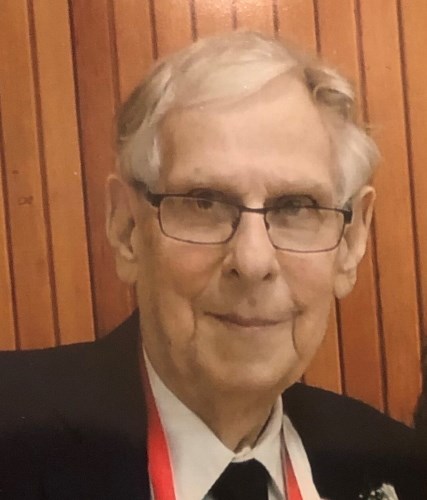 Dick was a 1954 graduate of Pine Grove High School, where he played on four championship basketball teams, one of which reached the District 11 Championship in 1953.

He was a member of St. Peter's Lutheran Church, Pine Grove, where he served on the church council for six years. He managed the Pine Lanes Bowling Alley in Pine Grove from 1961 to 1974, where he taught many children how to bowl. In 1978, he established R.&J. Trophies, a company he owned for 21 years.

Richard was a member of the Pine Grove Masonic Lodge 409 F&AM, since 1984; the Rajah Temple, Reading; Council of Consistory in Reading; the Pine Grove Lions Club, where he was Lion of the Year in 1994, and served as chairman of the Lions Club's Holiday Classic Parade for six years. Dick organized and chaired the Pine Grove Bicentennial Parade in 1976, securing 18 bands, the largest number for any Pine Grove parade. He also was an ambulance driver for eight years with the Pine Grove Community Ambulance Association.

He had served for 10 years in the Army and Pennsylvania National Guard in the 121st Transport Co. with the rank of supply sergeant and was a member of the Pine Grove American Legion Post 374. He received the merit award from the Pine Grove VFW for his service to veterans.

Dick was a member of the Saint Clair Old Timers and was inducted in the Allen Rogowicz Chapter Hall of Fame, Pottsville, in 1995 for his accomplishments as a basketball player and as a bowler, with an average score of 202. He served as the chairman for both the Coach Ronald Rhen and Coach Carmine Pepe testimonials and emceed many gatherings of former basketball and baseball players at Sweet Arrow Lake.

Richard served on the Pine Grove Borough Council for eight years, was a member of the Pinegrove Historical Society, the Tremont Senior Citizens and a lifetime member of the HH&L Fire Company No. 1 in Pine Grove. At one time, he had organized bus trips for cancer patients and their families to attend the "Cure for Cancer" March in Washington.

In 2001, Dick organized the Pine Grove Area Christmas Light Committee in memory of his wife, Carol, and had been in charge of the tree lighting ceremony and Christmas decorations in Pine Grove. His dedication and hard work to keep the Christmas spirit in Pine Grove has been greatly appreciated.

Funeral services will be held at 2:30 p.m. Friday, Dec. 10, at the H.L. Snyder Funeral Home Inc., Pine Grove, with the Rev. Brian Beissel officiating. There will be a viewing from 6 until 8 p.m. Thursday, Dec. 9, and from 1:30 until 2:30 p.m. Friday at the funeral home. Interment will follow in the St. Peter's Lutheran Cemetery, Pine Grove. The family would prefer, in lieu of flowers, contributions may be made to the St. Peter's Lutheran Church Capital Improvements Fund, 312 S. Tulpehocken St., Pine Grove, PA 17963, or the Pine Grove Area Christmas Light Committee, c/o Richard Todd Tice, 320 First St., Pine Grove, PA 17963, in his memory. You may send condolences to the family at the funeral home website at www.hlsnyderfuneralhome.com.

Published by Republican & Herald on Dec. 7, 2021.
To plant trees in memory, please visit the Sympathy Store.
MEMORIAL EVENTS
To offer your sympathy during this difficult time, you can now have memorial trees planted in a National Forest in memory of your loved one.
Funeral services provided by:
H L Snyder Funeral Home Inc
MAKE A DONATION
MEMORIES & CONDOLENCES
Sponsored by H L Snyder Funeral Home Inc.
0 Entries
Be the first to post a memory or condolences.