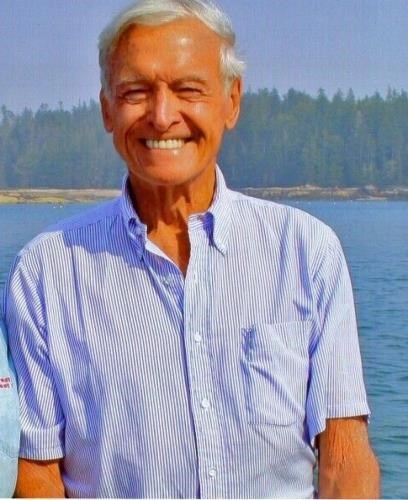 BORN
1922
DIED
2019
FUNERAL HOME
Lucas & Eaton Funeral Home Inc
91 Long Sands Rd
York, ME
YORK, Maine - Robert G. Gray, of York, Maine, passed away peacefully on Friday, May 31, 2019, with his devoted wife, Annie, by his side. Born on September 16, 1922 near Bristol, England to Alfred and Maude Gray, Robert demonstrated from an early age, a curious, inquisitive mind with the desire to meet any new challenge or opportunity.

In 1938, having completed courses in Engineering, Trigonometry and Science at Bristol University, Robert joined the Royal Air Force at age 17. For all six years of the war, he piloted Spitfires, Wellingtons, and Lancaster Bombers among others, completing 66 trips across Germany, and winning the Distinguished Flying Cross. Following the war, always willing to volunteer his services, he participated in the Berlin Airlift, moved refugees during lndia's partition in 1947, and Israel's founding in 1948.

In 1950, Robert joined British Overseas Airway Corp (BOAC) as Captain and started flying the first North Atlantic routes to Canada and the United States of America. Keen to be a part of the entrepreneurial spirit that America offered, he became a U.S. Citizen and joined the New York Times in 1952 as Assistant Production Manager, responsible for providing the daily and international editions. After eight fascinating years at The Times, a new opportunity arose to join the New York Post where Robert became Senior Vice President & Treasurer. During this time, he was at the center of many national events, and had the good fortune to lunch with Presidents Kennedy and Johnson, and other luminaries including Groucho Marx.

In 1965, ready for his next challenge, Robert decided to follow his passion for tennis and designed and built an indoor winter tennis club in Mt. Kisco, N.Y., called Chestnut Ridge Racquet Club. He ran that successfully until1972. During those summer months he lived in Lugano, Switzerland and participated in the professional European tennis circuit.

In 1975 he "retired" to York Harbor, Maine although retirement per se, was never part of Robert's grand plan. He soon became a lobsterman fishing 70 traps, and was well-known for delivering his catch to Harbor Fish Wholesale in the trunk of his 1971 Mercedes 250C Sedan.

Always civic-minded, Robert joined the York Planning Board becoming Chairman, and later became Chairman of the Appeals Board. He also started a weekly newspaper called the York Times, believing an informed community would be a better community. After a brief illness, he retired the paper. Soon thereafter he became partners with his wife in a Yacht Brokerage Company now called Gray & Gray Yachts. After 37 years of enjoyable business together, they have continued to form many lifelong friendships.

Robert will be remembered as a man of outstanding character, elegance, and kindness, a youthful spirit with an irresistible smile. Remarkably, in all his endeavours, he was self-taught which brought him much satisfaction. Never retired, never idle, up until his passing, he continued to design and build furniture, clocks, and half models in his workshop, always with a tie on.

He most appreciated life's simple pleasures, sitting in the cockpit of his 27' Downeast boat, or on the deck of his apartment in Stonington, Maine, watching the sunsets, while enjoying a glass of scotch, or sitting by a winter's fire with friends discussing the latest Quantum theory.

He inspired young and old with his wisdom and lifelong experiences, and had a gentle way of making all he met feel special.

Robert is survived by his wife, Annie, and her 98 year old mother, Anne Hawes, her two brothers, Robert and Richard, and niece, Heather and husband, David Dwyer and their three children, and niece, Jillian Hawes.

SERVICES: A celebration of his life will be held on June 24, at 11 a.m., at Stage Neck Inn, York Harbor, Maine.

Contributions if desired may be made to the Island Pantry or Island Community Center, Stonington, Maine. Lucas & Eaton Funeral Home, York, Maine is assisting with arrangements. Visit www.lucaseatonfuneralhome.com.

Published by Seacoastonline.com from Jun. 10 to Jun. 14, 2019.
To plant trees in memory, please visit the Sympathy Store.
MEMORIAL EVENTS
Jun
24
Celebration of Life
11:00a.m.
Stage Neck Inn
NH
Funeral services provided by:
Lucas & Eaton Funeral Home Inc
MAKE A DONATION
MEMORIES & CONDOLENCES
Sponsored by Lucas & Eaton Funeral Home Inc.
2 Entries
Our heavenly father hears the prayer of those calling on him. Please pray to Him during this most difficult time, and may you find peace and comfort Psalms 66;19,20.
June 15, 2019
May Almighty God and his son Jesus Christ bless and comfort your family in this time of sorrow. John 17:3
June 14, 2019
Showing 1 - 2 of 2 results